What happens when paradise is destroyed? Forced Autumn, Chicago Manual Style’s inaugural exhibition looks at Puerto Rico from afar after the US territory was decimated by Hurricane Maria. When conceiving of the exhibition, artist Ricardo Morales-Hernández wrote to the curators: “nature is completely devastated, there is a forced autumn on a tropical land”. The green hills were stripped of their leaves. The land grew parched and grey. Food, water and electricity shortages still plague the “vacation destination” two and a half months after the storm.

Paradise, as a term, erases. It hides the unimaginable, disguising realities that would tarnish a perfect sunset. Framed postcards intermittently dot the walls of the exhibition space, each obscured by a black square with only the word “FIN” cut from the shroud. FIN Postcard, 2017, by the Colombian group CARNE, takes depictions of perfect beaches and tourist destinations and blocks them out, obscuring the image meant to advertise these impossible places. Simply, CARNE invokes an end to these types of representations and by doing so calls up the cultural and economic mining tourist destinations undergo. In their initial exhibition FAMA in San Juan, FIN Postcard, was displayed in card carousels at a pop-up shop, serving as protest placards against the flattening of a place and its people into cerulean 4×6’s. In a postcard, what is imaginable is what sells and what attracts. Paradise, along these touristic terms, is necessarily one shaped by the desire of a capitalist dream.

Sky blue marks, the width of a finger, trace across cloth and compile into a natural scene of vegetation, crags, people. Ricardo Morales-Hernández’ Soli Deo Gloria SDG-016-400, 2016, stretches tautly across one wall. Its composition recalls European impressionist works that exoticized the tropical landscape, depicting Edens as gauzy, dense and lush. Morales-Hernández’ process, that of stretching fabric around or between trees and using sticks as daubs to paint and sketch, summons Western conceptions of primitivism. The romanticism of working en plein air coupled with tool making for art’s sake, what appears to be blown paint and simple short strokes combine into an image that presents the layered complexity of a territory between legalities, between reality and the fiction portrayed on a postcard. Morales-Hernández refers to his canvases as screens, his daubs as styluses, groupings of which are included on two plinths. The titles of his work seem more like an image file than a prayer. The ironic positioning of his materials and process speak to the bridge of language and its transformational potential as well as creating a space to exist in multiple worlds at once.

“The unseen becomes the seen in an inversion of the normal dynamic of visibility at work within exoticist, tropicalist and colonialist narratives.”

Facing Soli Deo Gloria (Latin for Glory to God) across the room, a large screen plays Allora & Calzadilla’s La noche que volvimos a ser gente (The night we became people again), 2017. The drone-shot video work resists being a document of their installation Puerto Rican Light (Cueva Vientos) which consists of Dan Flavin’s Puerto Rican Light (to Jeanie Blake) installed deep within a limestone cave. La noche never shows the Flavin piece, instead it acts as a supplement of the environment around Flavin’s tropicalist artwork, as well as a standalone commentary on the journey from nature into technology as the video moves from deep inside the cave to out.

The Flavin piece and its new configuration as Puerto Rican Light (Cueva Vientos), although not shown, becomes the center of the work, as critique, through its exclusion. The unseen becomes the seen in an inversion of the normal dynamic of visibility at work within exoticist, tropicalist and colonialist narratives. Comprised of three neon tubes—pink, yellow and red—and powered by a solar cell at the entrance to the cave, Flavin’s minimalist light work (which is inaccessible and barely visible to the visitor) becomes the exotified object in La noche, rather than its referent.

La noche que volvimos a ser gente is backed by a chant-like soundtrack, a mix of the camera drone’s actual buzzing and the elongated, abstracted syllables of a reading from José Luis González’ eponymous short story that tells of a Puerto Rican family remaking their home after moving to New York City. The video acts as if it were a moth, surveying the walls of the cave before heading towards the light of the gaping opening, then down along the hillside to an abandoned oil and petrochemical refinery that speaks to the economic and environmental devastation long ago perpetrated on the Eden by extractive colonial policies.

The cave is a paradise of a different sort. In his essay Cave Art and Climate Debt: The Geopolitics of Puerto Rican Light, Yates Mckee reminds us that: “Art historically, the image of the cave is connected to the very origins of humanity… but also, simultaneously, as the birthplace of art.” Mckee goes on to say, “[Georges] Bataille found in cave art a kind of original disfiguration or regulation of the human.”

The oldest known instances of representation, both of ourselves and of our world, hidden deep within the belly of the Earth, makes for a beautiful allegory. The 17,000-year-old cave paintings at Lascaux are believed to have been remade multiple times over generations. Our egos, not yet strong enough to emerge, scrawled obsessively, marking and remarking our interior world to assure ourselves of its veracity. World-making, we are reminded, must be done continuously.

Morales-Hernández has two more works in this exhibition: Fuego—SDG-017-002 and Viento SDG-017-005. Two greyish-brown line paintings made after Maria. They depict a bleak world, a paradise destroyed. There is yet activity in the conflagration of lines, there is still life, it must only be remade. The grey lines made blue again. 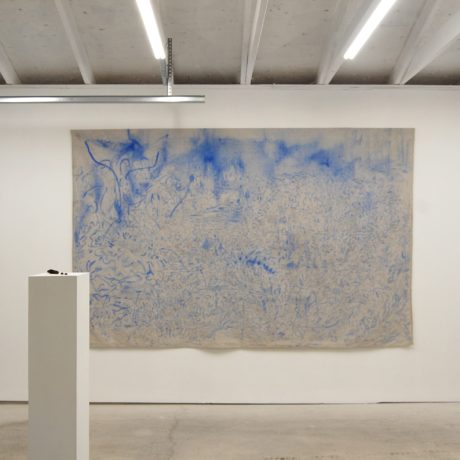