Like most of us, artist Peter Doyle’s day-to-day life is time-poor and rushed. He has an endless list of errands to run, an online social life to keep up with, a studio to look after, and an upcoming exhibition of his paintings on 6 December at Dublin’s Atelier Maser that he needs to finalize. After an unsuccessful art school application in 2014, Doyle decided to spend his time creating art through a process of trial-and-error, driven mainly by intuition and instinct. He has, since then, kept himself busy with his ever-expanding portfolio of distinctly vibrant, people-filled paintings. It comes as no surprise, therefore, that Doyle takes pleasure in those rare instances of quiet, those mundane moments of nothing.

Doyle’s paintings demonstrate his love of humdrum. His painted characters stretch themselves across the large-scale canvases, smoking, thinking or taking some time out to read a book on a poultry farm. “I am influenced by everyday life,” Doyle tells me. “I am from Dublin and find that I am inspired by the way in which someone is sitting on the bus or waiting in a line. There’s something very beautiful about it to me.” The paintings, whether they’re of high-end cafes or rural country scenes, feel authentically observational, as though the artist wasted no time putting paintbrush to paper to urgently capture the images precisely as he saw them.

It is this restless voyeurism that characterizes Doyle’s visceral artworks. The painter frames himself as a curious outsider, longing to gain a greater insight into his subjects’ lives. If he doesn’t, he fills in the blanks himself and reimagines the characters and their stories in his art pieces: “I like painting with an idea of the person being in a certain scenario. Sometimes it’s one they don’t want to be in. For example: I’ll find myself painting people in dark and dingy rooms with shit all over the floor. It makes me consider what this person would be like if they had a voice and existed in the real world.” Doyle’s artworks are as much a product of his close observations as they are the result of his restless imagination that transplants his characters into semi-fictional scenarios.

“I like it when the shadow of an object makes no sense in the context of the piece,” Doyle says. “A single vase or the leg of a chair can add depth and draw your eye to the forgotten corners of a painting. Strange dimensions make you look at every part of it.” There is an accidental quality about Doyle’s expressionistic portraits. The figures, although beautifully rendered, often lose a shoe or a top in the painting process.

One character sits on top of a table, the other behind it, while the third morphs into the background. Doyle’s playful manipulation of reality is what makes spectatorship so effective; the uncanny details grab our imagination and prompt us to engage with his curious images.

Realism is of little interest to Doyle. It is the internal worlds of people—most often, perhaps, himself—that he seeks to capture. His intense, non-naturalistic canvases depict what lies beneath the surface. He excavates a thought or feeling and preserves it via his unorthodox renderings of otherwise mundane moments. This expression of human emotion, the artist believes, is what makes art universally accessible. “I guess people can feel whatever they like when they look at a painting,” he says. “I’m not trying to achieve a shock factor or anything. The most important thing to me is that someone can look at a painting and relate to it. That’s what I like the most.”

One of Doyle’s artworks, for example, depicts a couple—a man and a woman—sitting on a white, metallic garden bench. The man, who wears a pale pin-striped suit, has turned his head hesitantly at the woman while she finishes her cigarette. There is an anxiety, a strong sense of doubt in the man’s uncertain gaze. Paint is a means through which to visualize an emotion—anger, fear, love—and situate it in the commonplace.

Doyle masterfully captures the ephemeral nature of modern-day life. His ability to reproduce, and even reinterpret, moments of downtime speaks to a generation of people who spend their lives rushing between work commitments and online obligations. In the social media age, when attention is money, and everyone—from politicians to advertisers to journalists—compete to capture a fraction of our time, Doyle offers a refreshing counter-narrative. It is neither the newsworthy nor the momentous that matters. Instead, the painter prompts us to recognize the value in a modest, overlooked detail. It is this, Doyle seems to say, that may prove to be an unlikely source of wonder or delight.

From 6 December at Atelier Maser 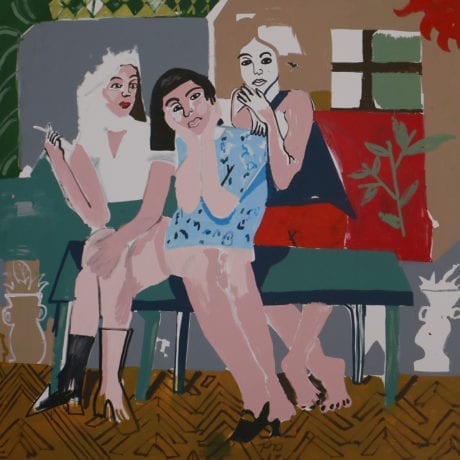