A decade ago, Nico Krijno was shooting portraits and chasing editorial assignments in London. Jaded by the endless compromises and the persistent feeling that he should be focusing his energy elsewhere, he returned to his native South Africa. “I don’t like glossy and perfect. Everything started to look the same. The visual cacophony brought on by the Internet homogenized culture. I’m interested in making something new.” He set up a small studio in a crumbling outhouse on a remote farm in Wellington and started to play. There he laid the foundations of his now unique and distinguished visual language. He focused his attention on materiality and matter, developing controlled methodologies, but always leaving room for serendipitous mistakes.

Krijno’s practice addresses still life in the information age. His latest offering, The Fluid Right Edge, is a series of staged assemblages that explore illusion and uncertainty through the manipulation of light, perspective and postproduction. His signature rough and raw digital touch heightens the experience of the work, leaving the viewer questioning where reality begins and fiction ends.

“I don’t like glossy and perfect. Everything started to look the same. The visual cacophony brought on by the Internet homogenized culture. I’m interested in making something new”.

Krijno’s work primarily deals with process, and the relationship between photography and performance. This inherent physicality is rooted in his background in film and theatre. “I am very much in my body when I am creating these installations. I can feel there is a certain tension that needs to be there, a rhythm that I’m looking for.” His latest works reference stage set-design and intricate theatrical illusions. They are playful and sharp, characterized by their interplay of contrasting images and textures, volume and form.

The sculptural elements of his practice are created through a type of visual alchemy: each item is scavenged or borrowed, a vibrant collection of urban flotsam and jetsam. Krijno builds images, rather than taking them, and this intuitive staging is a crucial part of his process. Blending painting, sculpture and a mash-up of lighting styles to fool the eye, he creates a spatial narrative that speaks to the “colour, texture, grime and mess” of his homeland.

Throughout the work, visual tropes and icons of the still life genre are deconstructed and pieced back together in unexpected and playful ways. These items create a game of associations, allowing the viewer’s mind to wander, making connections between seemingly unrelated objects. “It’s feeling before meaning for me. I think the initial subliminal reaction for the viewer is what I’m interested in.”

The rich surface texture becomes more complex with Krijno’s interruptive use of technology. In post-production he flattens perspective, adding and removing details to disrupt the picture plane, almost painting with digital information. “The tangibility and roughness of the edges are important. I’m always interfering with images.” This subversion of both the physical and digital aspect of the work creates layers of illusion illustrating Krijno’s ongoing desire to challenge the limitations of the photograph.

“I’m searching for patterns and rhythms, the tension between images and how shapes work and fit together.”

For Krijno, making work is about a constant flow, each image building on the last. “Half of the time I have no idea what I’m doing, but when I look at the previous five images I created, they fit into each other like a perfect puzzle.” He shares this work in progress in real time on his Tumblr, Pure Research, a dynamic, digital lab that tracks trends that emerge over time. “I’m searching for patterns and rhythms, the tension between images and how shapes work and fit together.”

Part of the richness in Krijno’s work is its unwillingness to be decoded: just when the viewer establishes an understanding of his codes of representation, the thread collapses, depth and surface exchange places giving way to an entirely new way into the work. The act of looking is an immersive one, moving back and forth in front of the frame, searching for clues. There is an emotional currency in the hunt.

While there is a definite sense of play and serendipity in his approach, there is also a serious rigour and focus. “A lot of it is owed to effort, somehow I feel rewarded if I’ve made the task really hard for myself. If I can trace the hours spent on something, on finding things in weird, obscure places and hacking away at it, I feel satisfied.” These ephemeral works are often temporal and unstable, with a limited lifespan. “It’s a cycle. The whole process of sourcing, intervention, all these things eventually create this feeling or rhythm I’m looking for.” Once this image is made, the objects are returned or recycled at the dump and the treasure hunt begins all over again.

All Images courtesy the artist 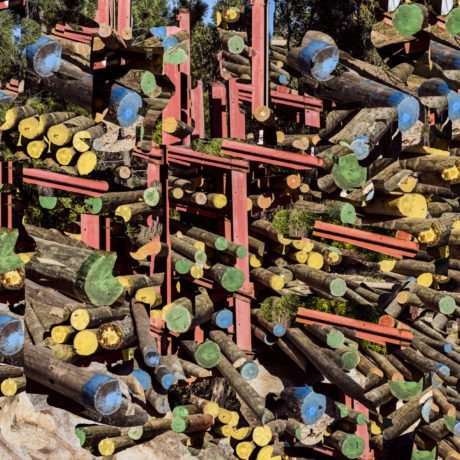