Pia Arke’s 1999 collage series, Legende I-V, features maps of Greenland (specifically, the regions around Ittoqqortoormiit) overlaid with archival photography and food. She used items such as rice, sugar, coffee, flour and oats, all produce which traces the mercantile patterns of Danish colonialism in Greenland, Arke’s two countries of origin.

Born in 1958 in Greenland to an Inuit seamstress and a Danish telegraphist, Arke probed the relationship between the two countries from an early age, becoming interested in language, dialect, and, in particular, the cultural architecture of European colonialism.

“Born in Greenland to an Inuit seamstress and a Danish telegraphist, Arke probed the relationship between the two countries”

This led her to archives in Europe and the United States, where she sought the visual and textual artefacts which had entrenched colonial narratives about Greenland’s indigenous populations. The photographs at the centre of the five collages in this series, several of which were originally used in Danish land claims over Greenland in the 1930s, are an example of this. Her composite maps also bear locations named after colonial explorers to the region.

After remaining relatively unknown outside northern Europe during her lifetime, Arke’s photography, installations, drawings and video works have found a wider audience since her death in 2007. Her published MFA thesis, Ethno-Aesthetics, has come to be viewed as an early intervention in postcolonial art theory.

Adding to the renewed critical attention since a trio of retrospective exhibitions in 2010, Swedish ethnologist Stefan Jonsson wrote that Arke’s work “reminds Danes and Europeans of a history they never got to know, or were taught not to know.” 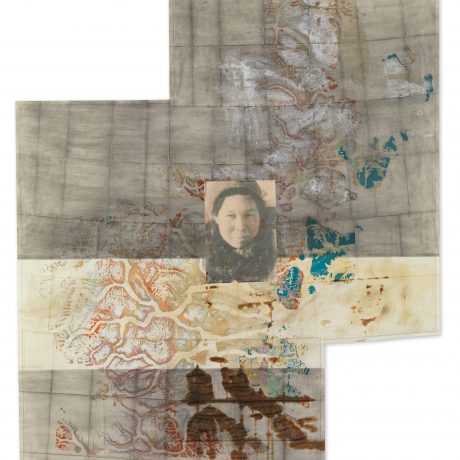