In the sixties and seventies, plastic was a novel and uber-modern material. Newly available to post-war consumers, it was correlative to the era’s hope. It was what you listened to music on. Andy Warhol depicted consumer goods made out of it, while the early works of Martial Raysse involved amassing plastic products and displaying them under plexiglass. Perhaps he had read Mythologies, the 1957 book of Roland Barthes in which he calls plastic a “miracle” and “the stuff of alchemy”. People saw it as liberating humankind from the lot the earth had dealt them. The mood of the day is summed up in 1967’s The Graduate, when a family friend takes the loafing Ben Braddock, played by Dustin Hoffman, away from a cocktail party to tell him “there’s a great future in plastics”.

People today have a different idea. Social media is awash with the hashtags #plasticfree and #zerowaste. Following the residue that Storm Eleanor left on beaches in Cornwall in the UK this January, towns in that region have been going plastic free, with two more joining the ranks this week. The BBC is regularly posting content about the issue, and last autumn London’s first plastic-free supermarket opened in Hackney. Regular supermarket chains are under pressure. They’re committing too.

The way we make art out of plastic is also changing in a post-plastic age. There are tonnes of installations about waste, often which upcycle waste. Richard and Judith Lang have spent almost twenty years collecting plastic from the California coastline and presenting it as art. The Bristol Whales, a 2015 work by Sue Lipscombe, marked the UK city of Bristol as a European Green Capital. In the piece, the two whales made out of willow will biodegrade over time, while the 70,000 plastic bottles making the waves around them will not.

But to get a sense of the most urgent work engaging with this, we must look to Africa. Artists from different countries, sometimes working on different continents, seem to share an intellectual concision and self-sufficiency, and are united by the use of waste materials in their work. During Frieze week last autumn, while Ghanaian heavyweight El Anatsui’s wall-hanging sculptures were being exhibited at the main Regent’s Park fair––sheets made out of discarded aluminium bottle caps, arranged into images of maps––the African art fair 1:54 gave me a full sense of what plastic art can do now.

“Though it is still essential, plastic is on its way to becoming a recherché substance, like asbestos.”

Zimbabwean artist Moffat Takadiwa’s The Prescription is made from the discarded letters of keyboards and vaccine caps. Polished, these look like a newly-minted currency. Ghanaian Serge Attukwei makes his works out of jerrycans used to import cooking oil, which then store a much more precious commodity during a drought: water. He cuts these into squares and stitches them into tapestries. When I saw the work, he was making a cover for a lagoon that corporations were intentionally polluting so as to fill it in and sell the land.

These artists use such materials partly because of the scarcity of traditional artistic supplies compared to an abundance of waste products. There is also a global dimension: these products are often exports, while the most valuable materials are extracted from the continent for use elsewhere. Clay Apenouvon, born in Togo and based in France, melts black plastic and uses the resultant substances to cover entire rooms. It can appear variably like oil––which Togo is plundered for but barely able to prosper from––or fossilized tree bark. At the height of the #blacklivesmatter movement, Apenouvon covered a gallery space in his plastic elixir as a comment on the invisibility of black artists, and especially black female artists.

“Will future generations look at work made of plastic as in some way ethically precarious, in the same way we now think of the wearing of second-hand furs, or certain Victorian paintings of nymphs?”

Engaging with work by these artists feels totally acceptible. But how might the way we look at older plastic objects d’art be informed by today’s discourse? Though it is still essential, plastic is on its way to becoming a recherché substance, like asbestos. It was during the same recent Frieze Week that I also loved work by the American artist Craig Kauffman (1932-2010), who hadn’t, at that point, been exhibited seriously in London since 1967. But the Sprüth Magers show Crossroads: Kauffman, Judd and Morris in Mayfair affords us an opportunity to look at what some of the first plastic art means in a post-plastic cultural shift.

This minimally presented show about minimalism (most works are untitled; there are no wall blurbs) has a brilliantly dissociative quality, as if it is about a civilization to which the key to understanding has been lost. There is also an innocence to it. One untitled work by Kauffman is a large folded piece of plastic with which you might line a school exercise book. Light coming through a facing window projects a sophisticated layering onto the wall behind it, and where the acrylic goes from green to orange creates a definite dark line dividing the ghost image behind, separating the colours in a Mondrianesque formation (or, more appropriately––seeing as he was a spiritual forerunner of minimalism––a sort of inverted Rothko, with two tiers of fluorescent colour instead of existential, eye-leeching murk).

This is art living lightly, temporarily, playing with the picture plane and leaving no trace. When it was made, Kauffman would have had no idea that the thing which created that translucency would one day leave the most trace, or that it is many times more permanent than other artistic materials, which can degrade in a matter of years unless they are kept in careful ecosystems of fixed temperature, humidity and light exposure. Plastic bottles and bags, even in a landfill or the sea, can take 450 to 1000 years to decompose. While some of Kauffman’s works are barely there, some emphasize their durability: the screws that keep them bolted to the wall. A Judd sculpture made of plexiglass reveals supports inside a clear, otherwise empty box. These works want us to know about their hardiness, permanence, man-madeness. Back then, plastics had a great future.

While Warhol had his Factory, these artists were thinking about their art in factory terms, using industrial processes for individual works, framing their work in a lingo of “experiment” and “demonstrations”. In a written announcement from 1970, Kaufmann offers his services for an hourly rate, “plus all travel, materials, construction and other costs”. Their practice from these years had a huge impact on art in the most plastic of decades, the eighties. Jeff Koons. Haim Steinbach, whose “shelves” consist of found objects often including plastic toys. When I interviewed him, I gave him a plastic toy for a potential future shelf.

But the #plasticfree moment has got me thinking about how people might look at these shelves in thirty years. Will they be seen as mounted time capsules, and will this confer upon the works a new aura of reliquary: of disproportionate distance between that present and its past? Or will future generations look at work made of plastic as in some way ethically precarious, in the same way we now think of the wearing of second-hand furs, or certain Victorian paintings of nymphs? For the sake of Kauffman’s legacy, and Steinbach’s, I hope not.

Until March 31 at Sprüth Magers 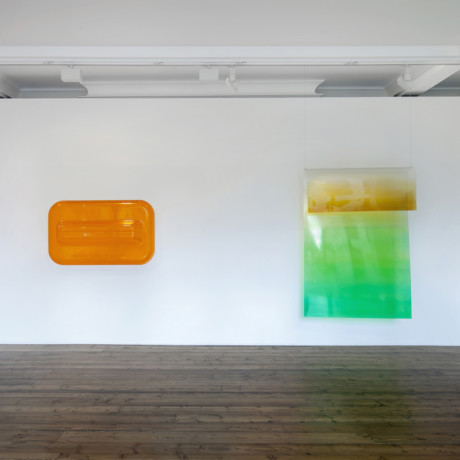