Artists Pope.L and Adam Pendleton may be a generation or so apart—the former has been renowned for his provocative, often very public discipline-spanning works since the 1970s; while Pendleton was featured on the Forbes Magazine’s “30 Under 30” list as recently as 2012—but it’s not hard to see where their sensibilities (and sense of humour) align. This month sees the opening of a new show at Zurich’s Galerie Eva Presenhuber entitled No Thing, presenting the work of both artists in dedicated exhibition spaces, with a collaborative performance that opened the show. Pope.L is showing new silkscreens, works on paper, and sculptures; while Pendleton is exhibiting a twenty-part suite of mylar works based on an African mask as a continuation of his development of the theory of Black Dada—a “critical articulation of blackness, abstraction, and the avant-garde”, as the gallery puts it.

Each artist claims the other came up with the exhibition title, “or it’s based on Samuel Beckett’s Stories and Texts for Nothing”, says Pope.L. “A set of tightly written yet loosely linked narratives that defy narrative. Maybe that is the feeling of the show. No one thing but a multitude…”

I spoke to the artists about the nature of collaboration, the role of artists in engaging with political issues, and why gallery spaces can be the worst sites for performance art.

What makes for a good artistic collaboration? How do you feel your individual practises complement each other?

Pope.L: A good collaboration requires two things: space when you need it, and boundaries when you don’t. We are black. Well at least I am. I shouldn’t speak for Adam. I have learned a certain generosity of spirit, wit and love of art from Adam that is very refreshing. Not sure this is generational, I have always been attracted to this sort of artist.

Adam Pendleton: Pope.L is an artist I’ve respected for many years, but have really only known through his work. We enact and realize our ideas differently, so it was important that we gave each other the conceptual and physical space to do what we needed to do. We never discussed what exactly the other person was going to do as we worked on the show, but remained in touch on a daily basis. Getting to know each through the frame of the exhibition made for a meaningful exchange.

How far do artists have a responsibility to engage with social and political issues?

PL: As far as you can throw a rock.

“What do I hope people get from seeing my work? Stomach pains, nausea, new insights about the democratic process”

Pope.L, your performances often involve local citizens and are sited outside—what are the challenges of performing in those sort of unpredictable environments? How does the nature of your performances have to adapt for the gallery space?

PL: The biggest challenge is allowing yourself to respond critically but without prejudice. Framing or not framing what you are doing when you are working in unconventional environments can be a great tool. People want to know: “What the fuck are you doing?” At times the answer is: “Fuck you. Ask a better question.” Galleries are the hardest places to perform because they are too familiar. The most fulfilling places may not be the best for the performance.

Adam, you’ve been described as “a kind of citizen-poet”. Why is language so central to what you do?

AP: I would claim the mantle of conceptualism but also Black Dada. Language is always failing. I see it both as a mechanism of escape but also a trap.

Pope.L, according to the gallery, your works “always have a tone that sticks and irks the consumer.” Should art rile people? What do you hope people get from seeing your work?

No Thing: Adam Pendleton and Pope.L 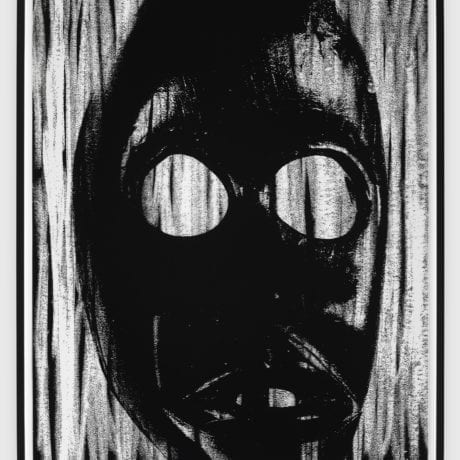