When Chris Kraus published I Love Dick, one of the most-discussed aspects of the book was the problematic nature of reading it on public transport. I found the exact same problem reading Olivier Schrauwen’s superb comic story collection Parallel Lives: I’d be loudly guffawing; and then realize I had his brightly hued pages open on a page replete with cartoonish cocks, or maybe an exploding volcano captioned with “I came”. For all the cheap gags and strange sex-infused alien encounters, this collection of six short stories is sharp, witty, beautifully drawn and a searing satire on the modern condition.

While Parallel Lives—which contains tales flitting from those about a trolled scat singer to a marriage blighted by a mysterious yellow man—fits comfortably into the sci-fi camp, its imagined scenarios often feel remarkably close to home. One story tells of an app that transforms a user’s appearance into that of a cartoon character—perhaps the ultimate conclusion to today’s digitally engineered bunny noses and doe eyes—and throughout the tales there’s an undercurrent of discomfort at hyper-masculinity or blithe, technologically assisted self-obsession. These things become at once poignant and absurd.

Belgian-born Schrauwen has lived in Berlin’s now-trendy Neukölln for the past decade or so (the site becomes a character of sorts in Parallel Lives’ opening tale, Greys, though in its pre-gentrification, desolate form), and this volume marks a new chapter in terms of its bolder use of colour than in his previous graphic novels such as Arsene Schrauwen. Previously, palettes have been restricted due to a couple of things: one, printing costs and restrictions, and secondly, the fact that Schrauwen is slightly colour blind. Here, the artist talks us through why he puts himself into all his stories, why he likes to confuse himself, and finding inspiration in YouTube’s autoplay feature.

What was the process like of putting together Parallel Lives? Although the stories were written at different times, they definitely feel very cohesive as a collection.

There’s about seven years between [making] the first and last story, so I just collected the stories and put them together in a book, though initially there was no plan to do that. Making it a whole seemed like a good idea; it kind of happened by itself. Certain things are always on my mind, it seems, but it’s not a thing I can control very well. When I make the stories I let my imagination try to be free and see what happens, but it’s coincidence they fit together. A lot of these are about some kind of attempt at human communication in different forms, people looking for connection with another, though not necessarily another human. A lot of it comes back to that.

While the book is very much sci-fi, a lot of the themes it touches on—the hint at a sort of computer controlling us in our head, or an app that changes our appearance, aren’t too far from the reality. Was that deliberate?

Making sci-fi seemed kind of appealing to me, because I always wanted to do those stories but when I started working on them they became more contemporary stories. I can’t seem to go completely science fiction mode and make it just about monsters or something, so in the end it’s something that’s much more about my daily life than anything more far-fetched.

“Whenever you’re writing a story it’s somehow about yourself”

You—or a character that has a variation of your name—is the protagonist throughout the stories. Why’s that? Are you, the person I’m speaking to now, any of those people or none of them?

That’s something I started to do a long time ago. I developed this alter ego figure that looks a bit like me, but in the end is quite different and leads a life of its own and has its own ideas. I build on it whenever I make a new story, but the idea is that whenever you’re writing a story it’s somehow about yourself. There’s variations on that, and clearly it’s not autobiographical, but it’s kind of personal in an oblique way. There’s some personal content but not in a direct way. I’m none of them or all of them.

I read somewhere that you like to use “intentional confusion” in your work. What does that mean?

I don’t know, maybe I was just confused! But I do try to confuse myself—I don’t like ideas to be clear cut, so I try to make them problematic because then I can find new ideas and go a bit outside of what might be a more cliched way of handling a story. I try anything to come up with a story that’s a bit more unusual; so confusing myself is a part of it. When you read my stories my hope is that you have to transport yourself into them, even though what’s going on can be very fairytale-like.

Where do these stories begin—I mean, what might trigger a certain plot line or character, and does the image or the text come first?

I have these notebooks that are full of random streams of consciousnesses, and a lot of it is just random and very uninteresting but sometimes I start writing something and then an image pops up and it propels itself. I feel like I’m not so much writing the story but seeing what might happen when one thing takes off. Nowadays mostly the words come first. I used to work the other way round and become fixated on an image, but I’d often get stuck as it was just a visual thing I had and that didn’t have enough meat on it or enough context or whatever. But it’s a difficult balance: sometimes it’s a good story but when I draw it, it might be difficult to balance what’s visually appealing with a narrative quality. Where it comes from is just a mass of things swirling around my head. When I’m working I just leave YouTube on autoplay so things all blend together and get inside my head.

By Olivier Schrauwen, published by Fantagraphics 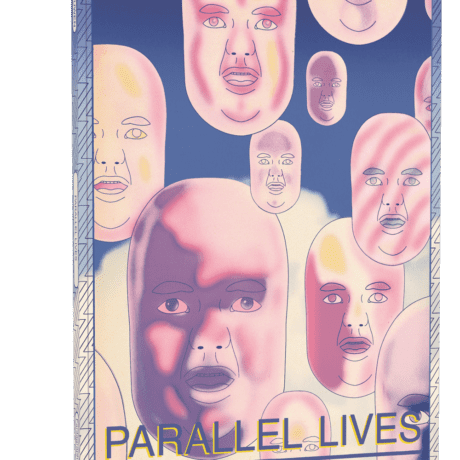