How did you start out as an artist? Your work is very political, but you are not an activist. How do you navigate the two?

I think that my initial interest in art was because I had no other choices. I wasn’t a good student and art kind of saved me. It was the only way I could get out of my hometown. I feel like I’m highly productive in this space. I’m very interested in labour and what I can do and I think I’m useful in this way. I’m optimizing myself. I do consider myself a labour body. My mom has to go to work in a place that she hates and I’m interested in what I’m able to do in these spaces and with these types of resources.

Do you ever feel anxious about your role as an artist, specifically having not entered the art world from a position of privilege?

Always. Ugh, my god, all the time. It’s really important for me that my family see me as someone who labours, someone who’s doing work, because of my anxiety around being an artist. But also, because I think that if I can get folks who are in the same social economic position as my family to understand that this is labour, that this is a part of the world not completely separated from you, there would be more people in schools who value an arts education. It teaches you how to critically think about images, which is what we’re surrounded by all of the time. My family aren’t just my test cases; they’re where I come from. They’re my switch that I go back and forth with.

“What do you do with a body that is being used? How do you prolong its life?”

Then I guess more specifically with how I work with images—I use a lot of appropriation—and I’ve been really trying to think through that. What is it to bring images of protest into a gallery? I think appropriation in general is highly problematic, especially when you’re working with marginalized—I hate the word marginalized— but when you’re dealing with black and brown subjects, how do you make work without it being an exploitation? And that’s essentially what I’ve always been interested in: what representation is, what it actually means and what form it takes.

Yes, and your avatar and black faces appear again and again in your videos. Do you feel an urgency or responsibility to start to correct centuries of non and misrepresentation of blackness?

I feel like at this point I have a bit of institutional privilege, when I’m in these white liberal spaces, that carries me through. When I go home, not so much. But it’s incredibly urgent to me because I think about the diaspora a lot, about the Middle Passage a lot. I’ve been thinking about them especially in connection with environmentalism; both the devastation of the bodies and the devastation of the landscape; how the South was completely destroyed in order to create this agricultural system and how that was intrinsically linked to the bodies of people being displaced and being killed.

You have repeatedly included exercise bikes that don’t actually function in your exhibitions. To me, these suggest frustrated aims, misspent energy and contemporary obsession with the body. What do they represent for you?

I’m really interested in efficiency culture and productivity. There is a lot of talk about blackness and queerness and black female queerness at the moment in general public dialogue, but as soon as you insert a fat body into that space it just gets really complicated. People’s politics aren’t really aligned when it comes to that because of all these assumptions about what you’re doing with yourself and if it’s something you have control over. It’s not as differentiated or easily understandable as race and gender.

Fatness and fat doesn’t feel as graspable. But as a fat-bodied person interacting with the internet, exercise bikes kept coming to me in my Amazon, like, “Hi, this is for you, you need this,” and I was just like, “Okay, interesting…” But those workstations, they have a long history, such as in Silicon Valley where it’s all about efficiency culture, making sure you’re not getting restless leg syndrome or something…

Exactly, and it’s so funny, my mom has one of those desks. But what I’m interested in is the physical object, this thing that is basically a machine to work a body: how is it going to figure out how to sustain its life? Because it knows it’s here to be used, and in relationship to the black diaspora—I’m interested in diaspora, but there are so many other peoples that exist in this way—we were literally machinery to be used.

And so, what do you do with a body that is being used? How do you prolong its life? For these machines—and I’ve made others that I’ve done different modifications for—it’s trying to impede its own productivity in order to prolong its life. It’s all a form of resistance. 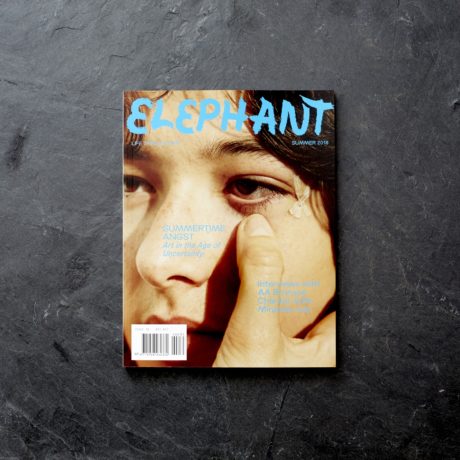