A young man holds a seated spinal twist pose, his high cheekbones and rounded upper chest reflecting the room’s light while his foot sinks into a soft, chalky mat. His body is a muscular grouping of perfectly straight lines: his left shin obscured by an outstretched arm held tense; his neck perfectly vertical and left arm hidden in strength, not strain. Behind, the wall appears canvas-like, almost a akin to a colour field painting.

The artist and subject are cousins: James Barnor and JPD (Peter) Dodoo respectively (both men apprenticed under Dodoo’s photographer father in early-1950s Accra). When Barnor was at school, his younger cousin gave him an introductory photography manual, laden with diagrams and formulas for treating negatives, printing and developing film. By 1955, when this photograph was taken, Dodoo was studying yoga under Mr Strong, a mystic who established the first ashram in the capital, while Barnor was capturing a nation on the cusp of independence from his Ever Young studio in Jamestown.

Dodoo would later travel to Germany to study architecture before returning to Accra, where his cousin had by then become Ghana’s foremost documentarist, both at home and abroad. In this image, the subject’s shorts (possibly underwear) speak to the casual, community atmosphere of Ever Young, where Barnor invited people from all walks of life to sit for him. “My studio was at a spot where everything happened in Accra,” the veteran photographer remembers, “where young and old people met from various backgrounds, free to talk about everything and anything.” He would travel to London in 1959, from then on working on portraiture, commercial assignments and photojournalism between the two cities.

“My studio was at a spot where everything happened in Accra, where young and old people met from various backgrounds”

In Barnor’s Accra/London – A Retrospective at the Serpentine’s North Gallery (on until 24 October), the above image forms part of a triptych of Peter’s yoga poses in the Accra 1950s section. This shot is positioned on the right-hand side, turning away from the other two images and towards a separate frame hung just next to it (incidentally, a portrait of Barnor’s eldest sister, Ivy, who seems to glance ever so slightly in the direction of Peter’s contorted body). In the companion yoga images, Peter performs an upright shoulder stand and, in the centre of the three, a plough pose, his hips positioned above his head and legs stretching diagonally towards the ground.

Barnor’s archive of 32,000 images have recently been digitised, but their power remains in film, as family, friends, strangers and even celebrities find strength in stillness before his lens.

At Serpentine North Gallery until 22 October 2021 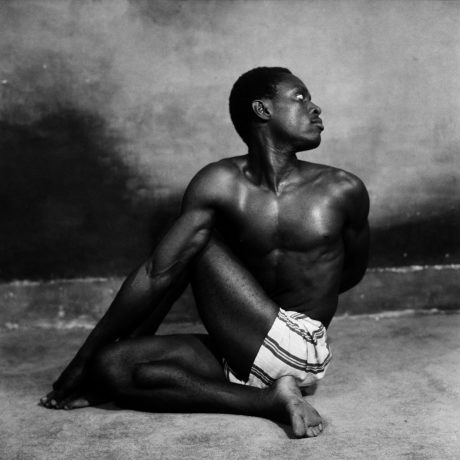