Growing up in London has imbued me with a corny but genuine and eternal longing to be somewhere where you can see for miles, where it’s just you and no buildings and a big, big sky. In an effort to assuage this yearning, I have spent countless hours of procrastination trekking around New Zealand and various parts of America on Google StreetView, getting high off all that Sublime through the computer screen.

Flicking through Nowhere Far does a similar thing in satisfying a little portion of that longing for huge deserted landscapes, though that is not exactly what its photographs are of. The book brings together work from six projects over the past fifteen years by photographer Nicholas Hughes, all under a moody grey canvas cover. Using solely large format film, the photographs are exquisitely ethereal, almost abstract depictions of the natural Sublime, never clearly just a landscape, more often than not aiming for the boundary between the land and the sky. Like photographic reincarnations of Turner’s seascapes and Gerhardt Richter’s seascapes much later, Nicholas Hughes’s images are alive with a liquid energy.

In some of the photographs the earth looks entirely extra-terrestrial. You certainly can’t tell that they were all taken within walking distance of Hughes’s homes, around North Wales, then London, then Cornwall—all lands become one earth under ominous fog and tempestuous skies, and the only signs of human life are the electricity pylons that crop up in some of the images from the Field series. Hughes explains “my intention is that representations stand for nature worldwide, regardless (of where they’re shot)”. An environmentalist from a young age, his concern is not with photographing the damage humanity has done to the planet but with photographing the beauty of the planet in a way that reinforces the necessity of keeping it alive.

I regret that I haven’t yet seen any of Hughes’s work printed large scale, as I can only imagine the overwhelming impact they must have. It’s frustrating in a way to look through Nowhere Far because it’s so obvious that the photographs can’t retain their full effect in this form—it’s hard to get lost in them when they just don’t take up enough space in your vision.

Yet the book is an object of beauty in itself. Printed on three different kinds of paper, with the front and the back on a deep blue that closes it off like night on either side of the day. It also includes three texts: a foreword by Brett Rogers, the director of the Photographers Gallery, who represents Hughes and has hosted three of his solo shows, as well as a poetic piece This Subtle Light by author Jay Griffiths and an essay by senior curator of photographs at the V&A, Martin Barnes.

Nowhere Far is an ode to the spirituality found in the vastness of the world, the serenity or drama that exists simply in a still or stormy sky—rather than being straight figurative landscapes, it’s more as if Nicholas Hughes has set out to make photographs of the elements. 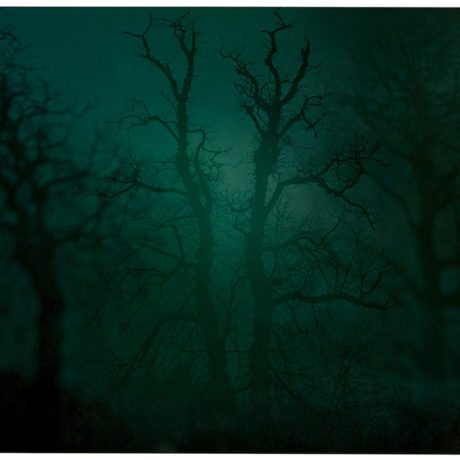