As I ring Viviane Sassen’s studio ahead of her exhibition Hot Mirror at the Hepworth Wakefield, I am reminded of the first time I saw her work. It was part of a group show in a former Co-op supermarket at Brighton Photo Biennale. The atmosphere was distinctly low-fi in 2010, the smell of freshly painted walls and the low hum of overhead strip lighting filling the retail relic. Tucked away in an unassuming corner was Flamboya (2008), a series of staged and spontaneous portraits shot in Kenya. The project contained the foundations of her visual language, where shadows flatten, portals open and gravity is distorted. Together they conjure a world where nothing is quite what it seems. Flamboya marked a new beginning for Sassen, establishing her as an artist in her own right—having previously worked primarily as a fashion photographer.

Sassen’s childhood was the catalyst for much of her work. Ideas around multiplicity and alternate realities manifest from a disruptive shift between continents. At two years old, her father moved the family to a remote village in western Kenya, where he worked as a doctor. The three years that she spent there went on to have incredible significance in her professional formation. “As a child I felt trapped. I grew up in Kenya and then moved to Holland, and those two worlds were completely different. I always had the deep feeling that I belong to Africa and that my real life would go on without me. I was desperate to get back. I didn’t know anything else.”

In the last decade, Sassen has successfully blended the worlds of art and commerce. Taking full advantage of fashion’s transitionary nature, she uses the space to play and go wild; she explains: “Editorial work for magazines is my testing ground. It’s a blank canvas for me to experiment.” While her art practice is deeply cathartic, focusing on personal histories and her fascination with the inner workings of the human psyche, she has a lifelong affinity with surrealism. She credits the movement with shaping her gaze and personal philosophy. “For me, surrealism is the ability to experience or look at things in a way that’s unbiased, free of judgement and convention—almost like looking through the eyes of a child.”

Hot Mirror reveals the surrealist undercurrent in the Dutch photographer’s work. Bringing together over sixty artworks created in the last ten years, the show offers new and unexpected pairings of her work. Familiar images from Flamboya and Umbra are interspersed between her most recent series Of Mud and Lotus (2017), a meditation on life and fertility. The show blends large-scale photographs, experimental photo-collages and film to provide an immersive survey of her work. Fittingly the exhibition is held in conjunction with a retrospective dedicated to surrealist pioneer Lee Miller. Both women are known for their provocative work that blurs the boundaries between art, fashion and life.

““For me, surrealism is the ability to experience or look at things in a way that’s unbiased, free of judgement and convention—almost like looking through the eyes of a child”

Sassen’s visual language is rooted in the human psyche. Shadows act as a metaphor for love, loss, anxiety and memory. Seemingly everyday objects and situations laced with shade are imbued with mystery and tension. Mirrors become portals into other worlds tapping into her fascination with the subconscious, “When I was younger I felt my dream world was as important as my waking world. I had a life at night and another in the daytime.”

In her latest work, Of Mud and Lotus, she explores the human condition from a distinctly female point of view. Experimenting with collage and hand painted layers, she evokes an imaginary realm of colour and texture where abstraction and performance intertwine. Organic materials such as flowers, eggs and milk are used suggestively within her imagery of the female figure, exploring ideas around transition and creation. “My work is so personal, I’ve been exploring female-focused ideas long before it was in fashion.  Now that I’m a forty-five-year-old mother, my work is totally different to when I was twenty-three. My focus is less political and I’m interested in exploring my own experiences. Now I’m on the verge of losing my fertility, so Of Mud and Lotus has been a way of saying goodbye but also cherishing the female body. I believe all the work we do is a self-portrait. Even if you’re an abstract painter, it’s always personal.”

“When I was younger I felt my dream world was as important as my waking world. I had a life at night and another in the daytime”

The centrepiece of the exhibition is an immersive installation of Sassen’s film Totem, exploring the dichotomy between nature and mankind. Human silhouettes cut from bright backgrounds sit alongside dramatic landscapes, illustrating the traces we leave behind as a species on the surface of the earth. The film’s complex materiality is rich, beautiful and disorientating in equal measure. “There is always this kind of friction with our perception of the real world. I’m drawn to these opposite forces, the dark and the light, balancing them as one cannot live without the other.”

Sassen is a master illusionist, often placing her subject in limbo, somewhere between a two-dimensional and three-dimensional form. “The development of my visual language has always been an organic process.” She adds, “I feel like I’m always solving little puzzles or making combinations. It’s all just trial and error while you’re creating something, hunting for that little bit of magic.” Heightened by colour, sculpture and structure, Sassen’s ambiguous world pulls the viewer in close, forcing them to question what is real and true. “My pictures function as some kind of mirror, I like to ask questions rather than give answers.”

Until 7 October at Hepworth Wakefield 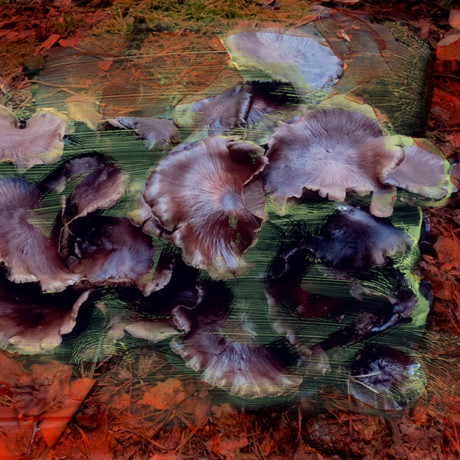