England, the land of croquet, pickled eggs, sherry and social awkwardness. Of country manors, Oxford and Cambridge, afternoon tea and a snifter of whisky before bed. This is a country where the class system remains firmly in place, rooted in historical land-owning gentry and powerful double-barrelled surnames. There is an enduring fascination with the upper classes, perhaps due to the fact that they tend to operate so far outside of the realm of the ordinary. Like a rare species glimpsed only occasionally in the wild, cloistered in their natural habitat, it is often only through photographs that we are are able to gain a privileged insight into… well, privilege itself.

A young photojournalist on assignment for Tatler—bible of the upper crust—throughout the 1980s, Dafydd Jones became one such intrepid observer. While working for the magazine, he gained access to everything from society weddings to college May Balls, intimate soirees to debutante dances. His images are distinctive for their deadpan portrayal of decadence and debauchery. Despite their often skilful composition, they manage to feel like snapshots, as if Jones just stuck his arm out amidst the chaos and pressed the shutter. It is not an easy sensation to pull off, to enact total immersion within a single frame.

“There is an enduring fascination with the upper classes, perhaps due to the fact that they tend to operate so far outside of the realm of the ordinary”

The Last Hurrah, published by Stanley/Barker, brings together a selection of his images from this time, and accompanies a recent exhibition at The Photographers’ Gallery Print Room in London. Young men and women in dinner jackets and ball gowns cavort and copulate before the camera, some playing up to the lens, others oblivious and carried away by their own revelry. There is something strangely uneasy about young people in formal wear, as if they are playing dress-up—at once aspirational and arrogant. Kissing couples, a common sight in most nightclubs, take on a new dimension when the man is wearing a bow tie.

The scenes, mostly captured at night and illuminated for a split-second under Jones’s harsh flash, remind me of Alan Hollinghurst’s intimate depiction of the personal lives of the British upper classes in The Line of Beauty, also set in the 1980s: “Nick picked his way between groups sitting on the floor in front of an enormous sofa where fat Lord Shepton was lying with his tie undone and his head on the thigh of an attractive drunk girl. […] Somehow they had recreated the mood of a college room late at night, girls’ stockinged feet stretched out across boyfriends’ knees, smoke in the air, two or three voices dominating. Nick felt the charm as well as the threat of the group.” It is precisely this seductive charm, laced with the menace of extreme entitlement, that charges the images included in The Last Hurrah.

“There is something strangely uneasy about young people in formal wear, as if they are playing dress-up”

These are photographs as threatening as they frivolous, playful and yet disturbing. Pranks and causal foolery abound—and why not create trouble when you’ve got no other worries in the world? Jones remains an outsider, observing the chaos from the sidelines. “I had access to what felt like a secret world. It was a subject that had been written about and dramatised but I don’t think any photographers had ever tackled before. There was a change going on. Someone described it as a ‘last hurrah’ of the upper classes,” he reflects.

Printed on newsprint, and folded neatly in two, The Last Hurrah conveys this feeling of transience. It crumples easily but rustles pleasingly as you turn the pages. There is no accompanying text about its subjects or the era, leaving the stark black-and-white photographs to speak for themselves. Assembled together, they feel absurd, poignant and, yes, extremely English.

All images © Dafydd Jones, from the book The Last Hurrah published by Stanley/Barker

The Last Hurrah by Dafydd Jones 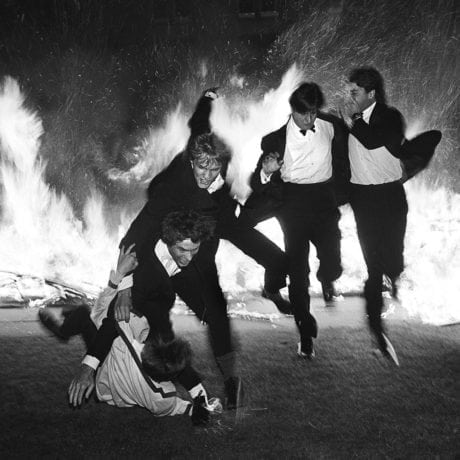