The dancing figures of Matisse are recalled in the brightly coloured tapestry works of South African artist Pierre le Riche. Under his gaze these male figures move with gleeful abandon, morphing between sexual desire and repose. Strong graphic shapes, primary colours and patterns form optical illusions as they clash and overlap, melding figuration with abstraction to create a sensation of constant movement. Threads are used to build texture and solid areas of block colour, as le Riche’s silhouettes dance across the frame in a celebration of fluid sexuality and the imprints that we each leave behind as we engage in encounters (romantic or otherwise) with friends and strangers alike. (Louise Benson)

Every one of Sahara Longe’s canvases are dripping in art historical references, in which the artist reimagines a canon long reserved for the white male gaze. Her exemplary skills with oils, honed from training at Charles H Cecil Studios in Florence, see her move effortlessly through the language and symbolism of Titian and Rubens, as well as more modern figures such as Sargent and Vuillard. While the points of connection are clear, Longe’s works move far beyond homage. By merging the marks of history with her own style, she resituates both protagonists and muses as Black figures, thus building an entirely new lexicon of art, agency and power in the process. (Holly Black)

Drawing inspiration from the culture of his native Congo, Bakambana moves seamlessly through a bright, energetic oil palette to give his characters a vibrant, expressionistic feel, even when caught relaxing over a drink or seated on a stool. Depicting members of the Société des Ambianceurs et des Personnes Élégantes (Society of Ambiance-Makers and Elegant People or La Sape), a Congolese subculture centred on fine clothing and style, Bakambana channels their adoption of colour beyond their figures, using his interiors to explore more abstract brush styles and configurations. (Ravi Ghosh)

Najla Said captures the intimacy of female kinship in her photographs. Her 2021 project Sister, Oh Sister, is shown at 1-54 and depicts women (sometimes alone, sometimes in groups) atop motorbikes against a soft pink silky backdrop. They convey the many different faces of womanhood, and push against the limiting patriarchal ideals of “femininity”. The series explores the artist’s own experiences in Cairo, and specifically address the societal expectations of Arab women, in how they look, dress, wear their hair and carry themselves. There is both a warmth and toughness to all of the images, as the women in the images drape their arms around each other in loving embraces, and stare unwaveringly into the lens. (Emily Steer)

There are swirling emotions in every photograph by Ivorian artist Joana Choumali. At first glance, these images don’t look like photographs at all. Instead, Choumali prints her images on fabric, lending them a depth of emotion and energy that would not come from photo paper. She then embroiders directly onto the image, elaborating city scenes at night with stitching and wandering threads that lend them an otherworldly quality. There is magic in these works, where a tulle halo appears around the head of a runner, and a figure beams golden light from a single gesture. “Instead of adding effects on the image with the postproduction of digital images, I decided to obtain it in a more tactile way,” Chomali told Elephant in an interview in 2019. “I use the voiles and the fabric to highlight and recreate the soft and misty morning air.” (Louise Benson)

Salah Elmur is very present at 1-54, showing with both Vigo Gallery and Circle Art Gallery. On first glance, his paintings belie the tragic subject matter that informs them; his Innocent Prisoner series of works take their cue from the many Sudanese people who have been taken into custody, tortured and killed since the 1960s. These detailed and often playful works offer alternative mug shots, subverting the typically cold and impersonal nature of prisoner photographs to show the wider narrative of each person. Elmur’s prisoners, each given a number by way of identification, are given back their humanity through his compositions. His paintings confront the objective presentation they are granted by the penal system, which Elmur believes is a tool for “desensitising” onlookers to their individual plights. (Emily Steer) 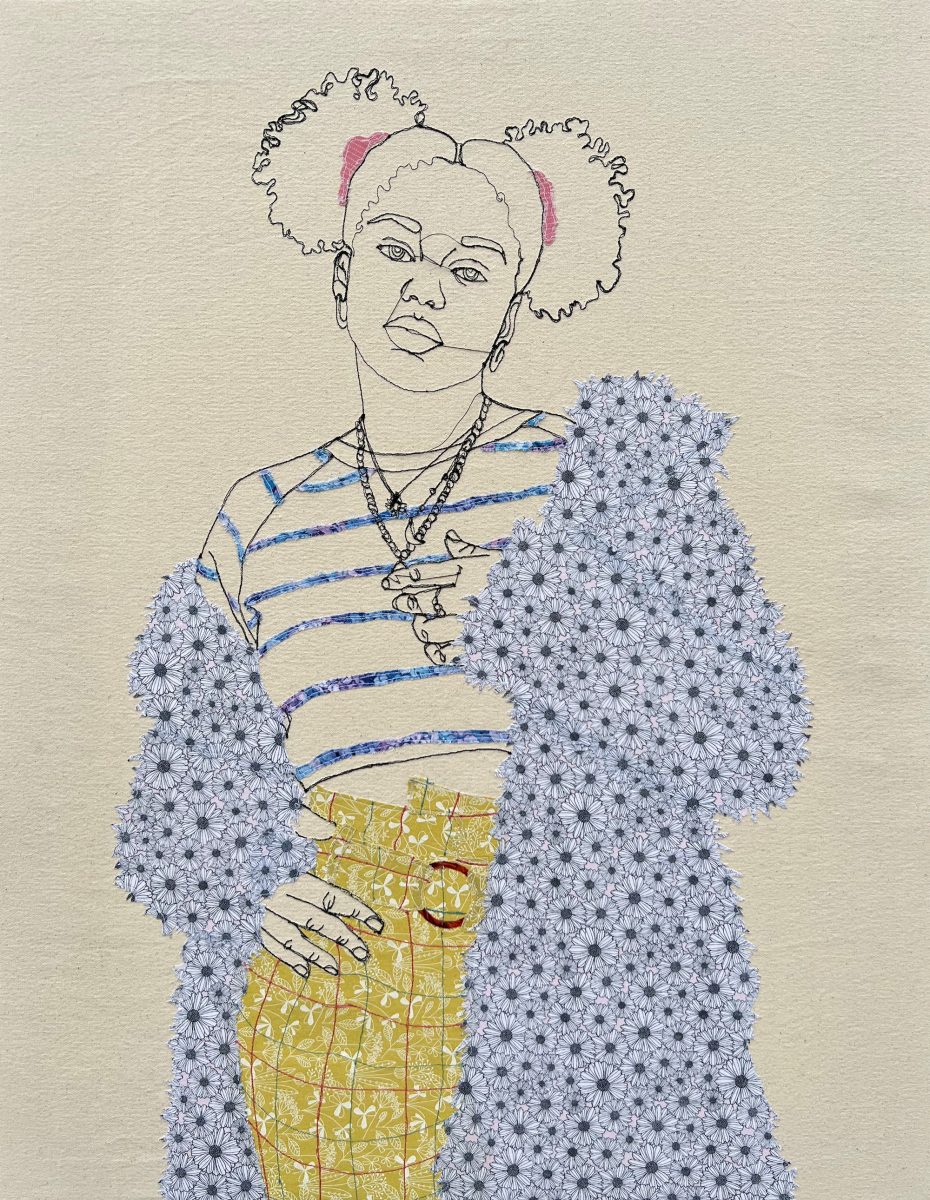 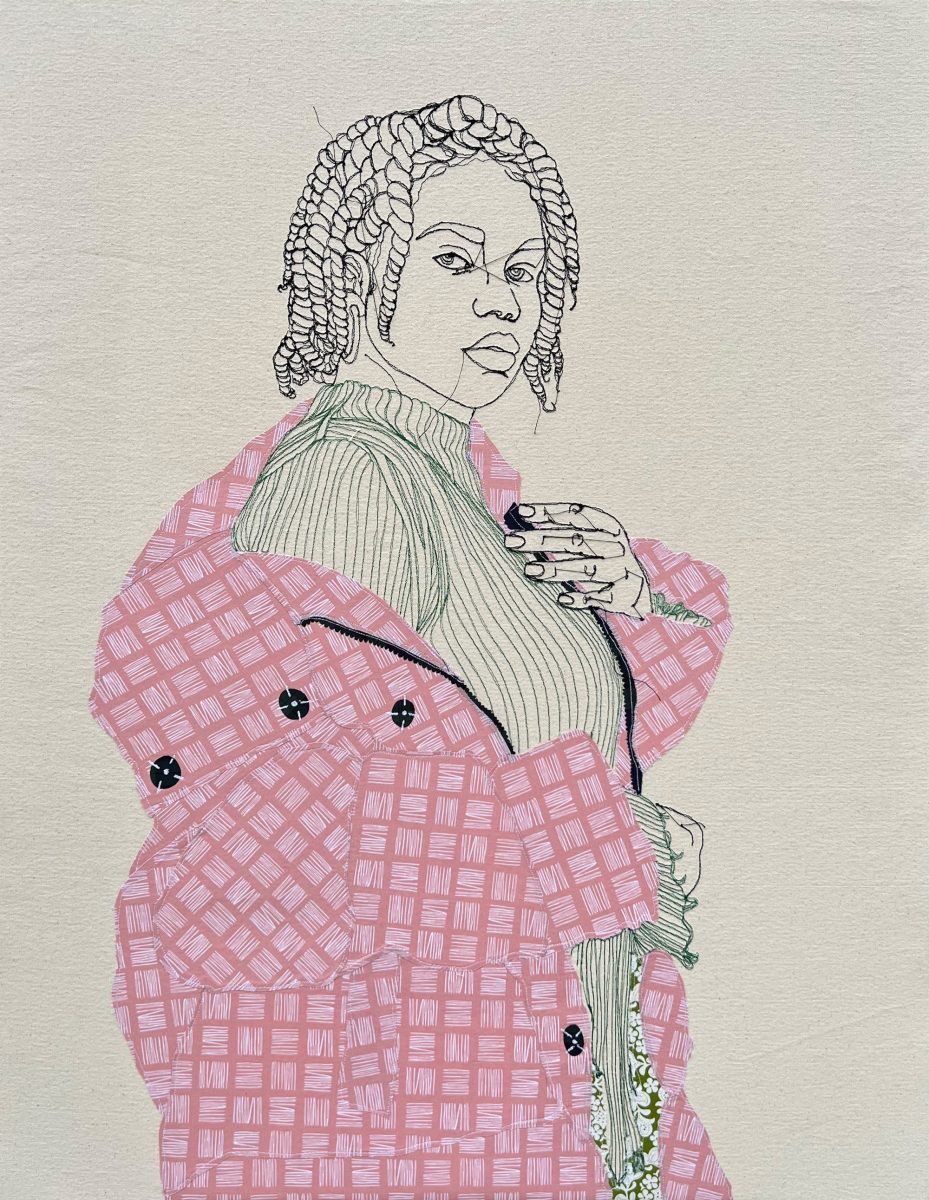 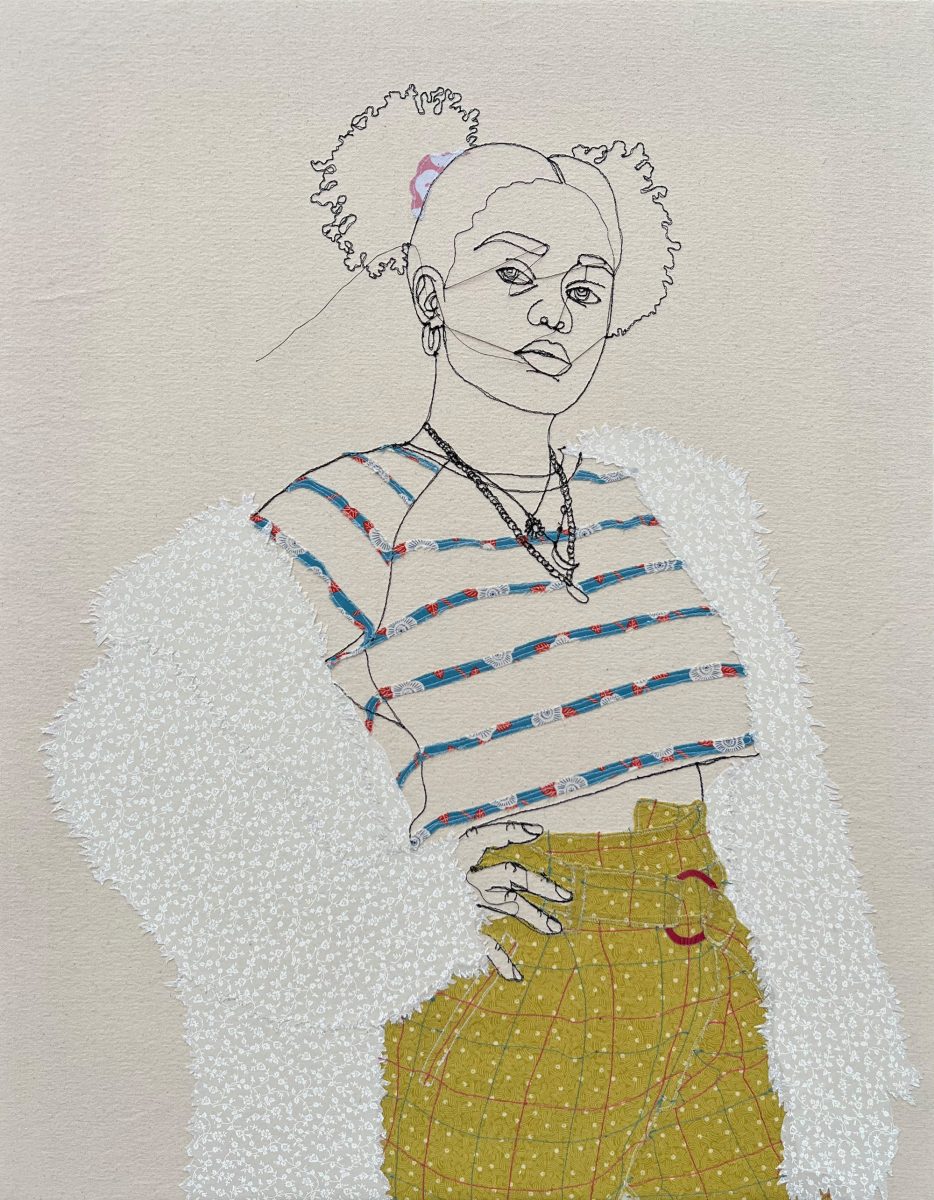 Threads hang loose in the delicate textile works of Bahamas-born artist Gio Swaby. It is a tender gesture that hints not only at the many threads that hold our lives together, but the moments where they tangle and become undone. Strength and fragility entwine in these portraits of Black women who stand and pose as if for an unseen camera, at once performing a persona and confidently at ease. Swaby pays careful attention to the visual cues inherent in personal style, from artfully ripped jeans to a colourful bralette worn just-so beneath an oversized jacket. These are portraits of women who know themselves well, but who are accustomed to being read and misread by others as the move through the world around them. (Louise Benson)

The Accra-born photographer creates scenes of interplay between his subjects and their surroundings, using props to layer, and often liberate, an otherwise cool, monochrome tonality. His series If we play like this, we stand a chance was made during the first coronavirus lockdown, though looks beyond that extraordinary period in its embrace of play, theatricality and intimacy between friends. He instructs his subjects (normally family and friends) like dancers, allowing their bodies to occupy the full scope of his images, while his skywards backdrops are undefined in comparison. (Ravi Ghosh)