“A persistent whinge of wimmin photographers is that they are not given equal opportunities to exhibit their work.” That’s the opening salvo from an overview of a women’s photography festival held in London in 1988, written by reviewer Brian Dee. “This is nonsense,” he continues, “particularly so in the wimmin-conscious 1980s where gallery directors, curators, keepers, [and] exhibition organisers… are more likely to be wimmin than not.”

Wimmin photographers, eh? What a bunch! If one were to believe this beleaguered critic, they must have been simply impossible to avoid all decade, crowding the galleries and simply drowning in attention and accolades. The festival in question featured Helen Levitt who, contrary to Mr Dee’s declaration, is still pursued some thirty years later by David Levi Strauss’ assessment of her in 1997 as “the most celebrated, least known photographer.”

A new exhibition, Helen Levitt: In the Street (at The Photographers’ Gallery) sets out to shed new light upon the American photographer, and raise her profile once more. Her work is startling. In front of her lens, children play and women clutch their hands to their chests. Her photos pulses with a “rhythm of lines, surfaces, and values” (to borrow Henri Cartier-Bresson’s phrase), the busy streets of New York surveyed by Levitt’s sportive eye. It is a rhythm that, through Levitt’s perspective, becomes slightly off-kilter. 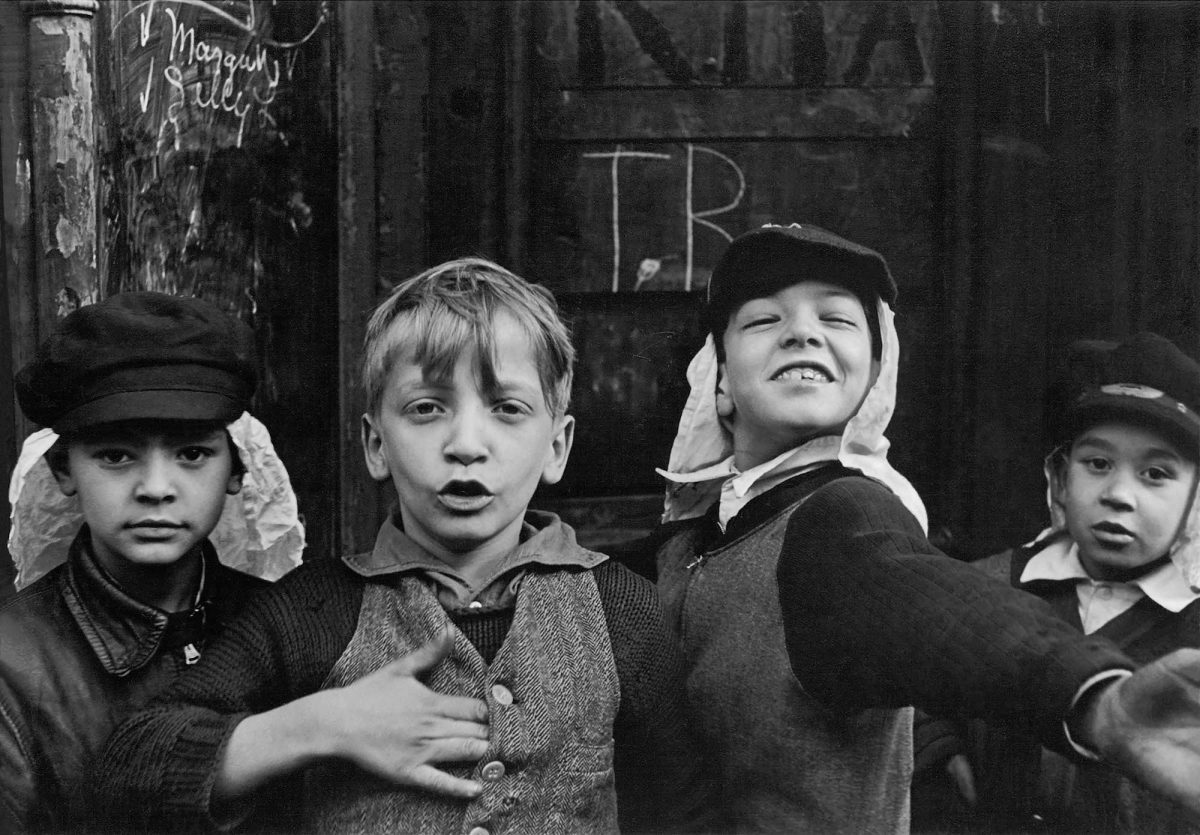 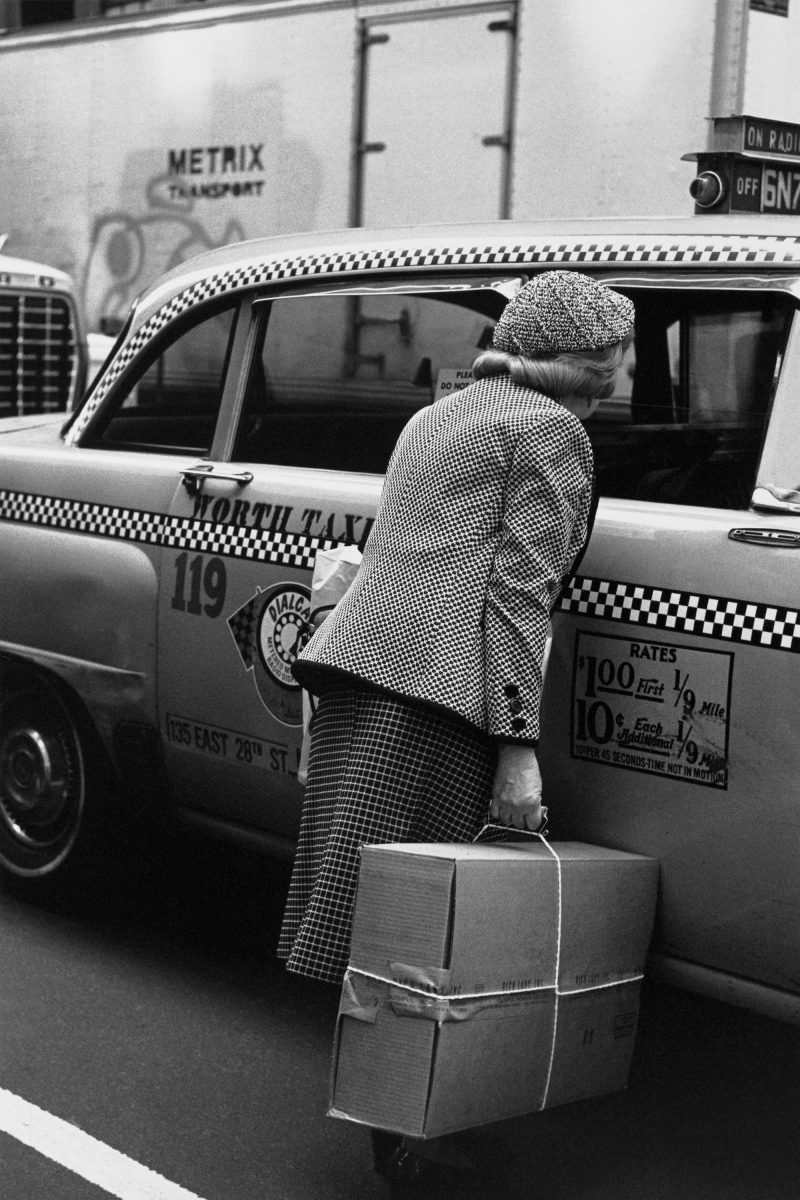 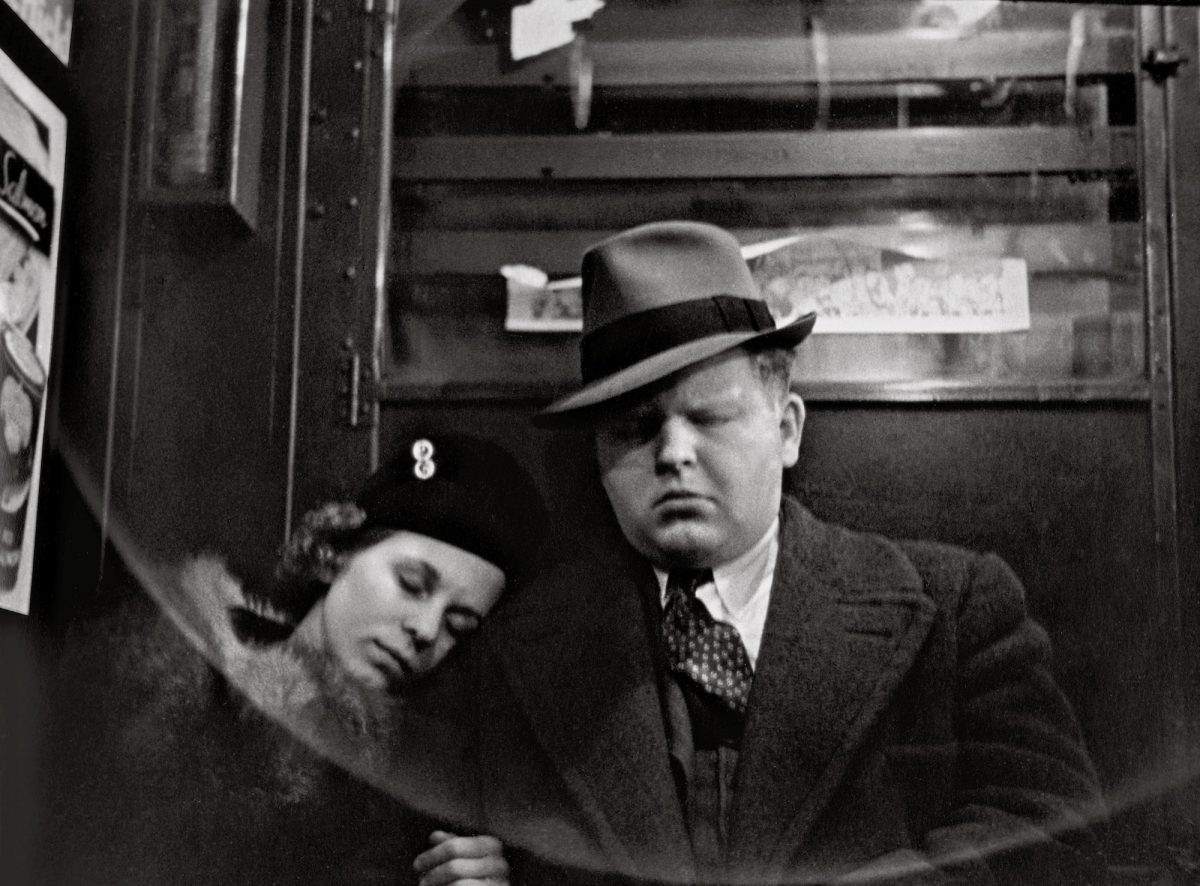 This is street photography as an event. She likes an unpredictable gesture, a moment that spotlights the drama of daily life. Her work, which stretches from the 1930s all the way to the 1990s, moving from black and white to rich colour, is fuelled by a spirited sense of the surreal. As her friend the writer James Agee noted, these are images that understand public space as “a theatre and a battleground.”

But a body of work does not exist in isolation. It is subject to the ever-changing tastes and judgments of the time it finds itself in. What does it mean to be known as a street photographer, particularly a female one? It comes with a degree of immediate name recognition, the kind that Cartier-Bresson has received in spades, along with a host of others including Weegee, Brassaï, Walker Evans, Garry Winogrand, Robert Frank, Bruce Davidson and Joel Meyerowitz (among the women one might feasibly include Diane Arbus and Lisette Model). It means, perhaps, getting to the point where you’re no longer described as an enigmatic gem constantly in the process of being discovered.

“You don’t know what you will come across while walking on the streets. All the action I capture is all natural and spontaneous”

Questions of legacy and reputation are valuable right now because, in recent years, there has been a huge surge of interest in female street photographers. Alongside Levitt, we have the unassuming nanny Vivian Maier who wandered the streets of Chicago with her Rolleiflex and left behind more than 100,000 negatives in a storage container, the contents of which were sold two years prior to her death and caused a media sensation.

On this side of the Atlantic there is Salford-born Shirley Baker, who recorded post-war life in Greater Manchester with sensitivity and humour, and has recently enjoyed a number of exhibitions and books devoted to her work. All three women assiduously documented their local communities. All three died in the space of five years (Maier and  Levitt in 2009, Baker in 2014) and have experienced a posthumous leap in reputation, albeit one that still classes them, at least in the case of Levitt and Baker, as remaining on the cusp of mainstream recognition. 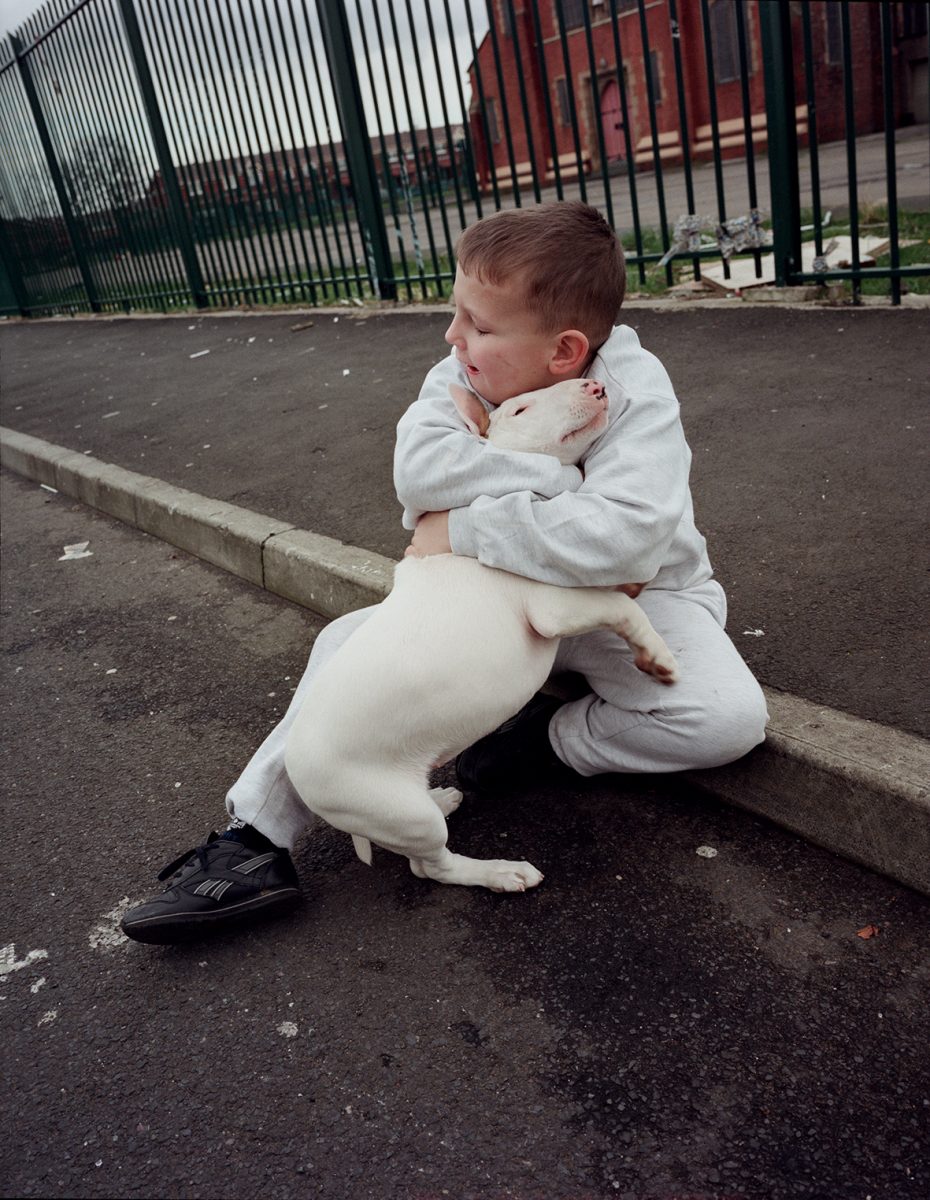 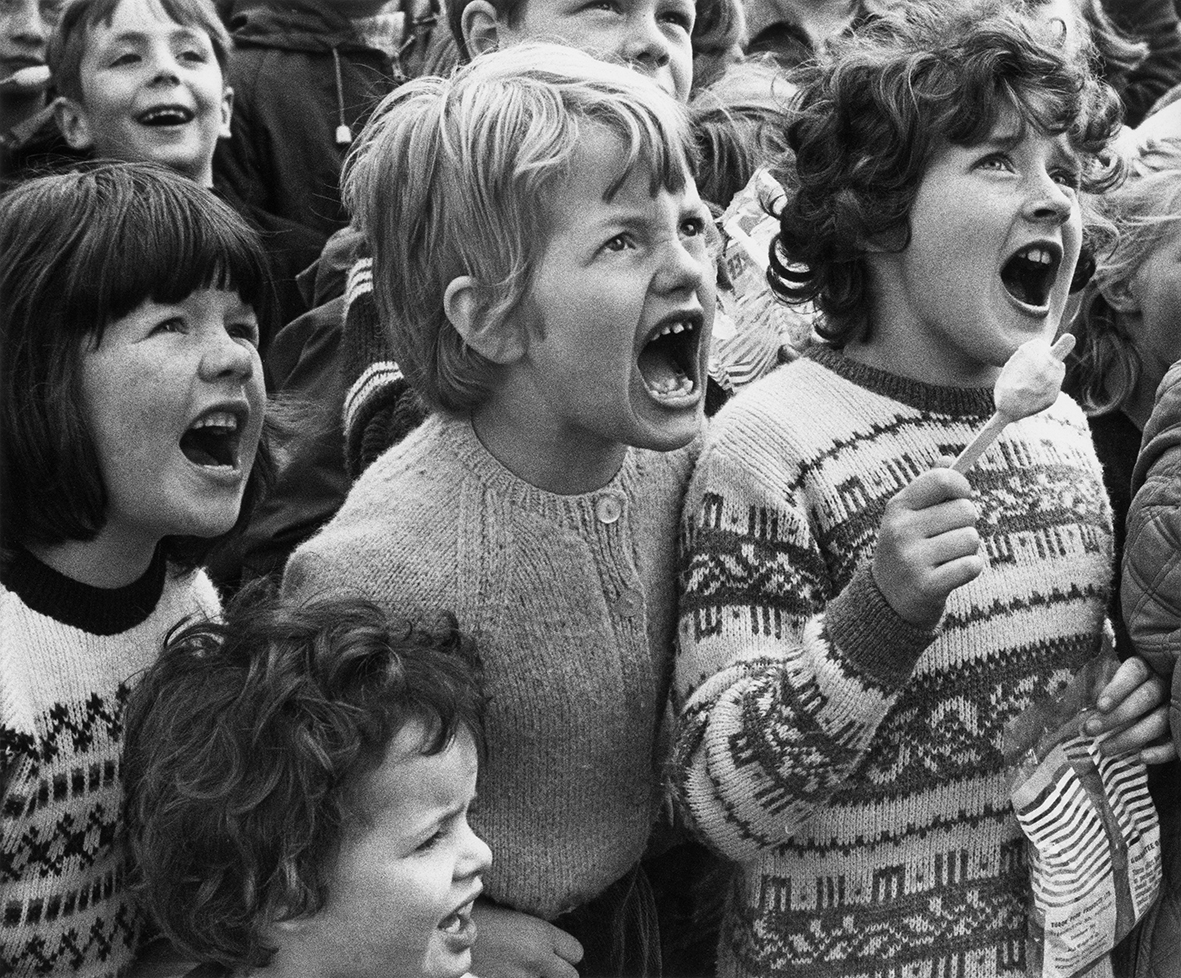 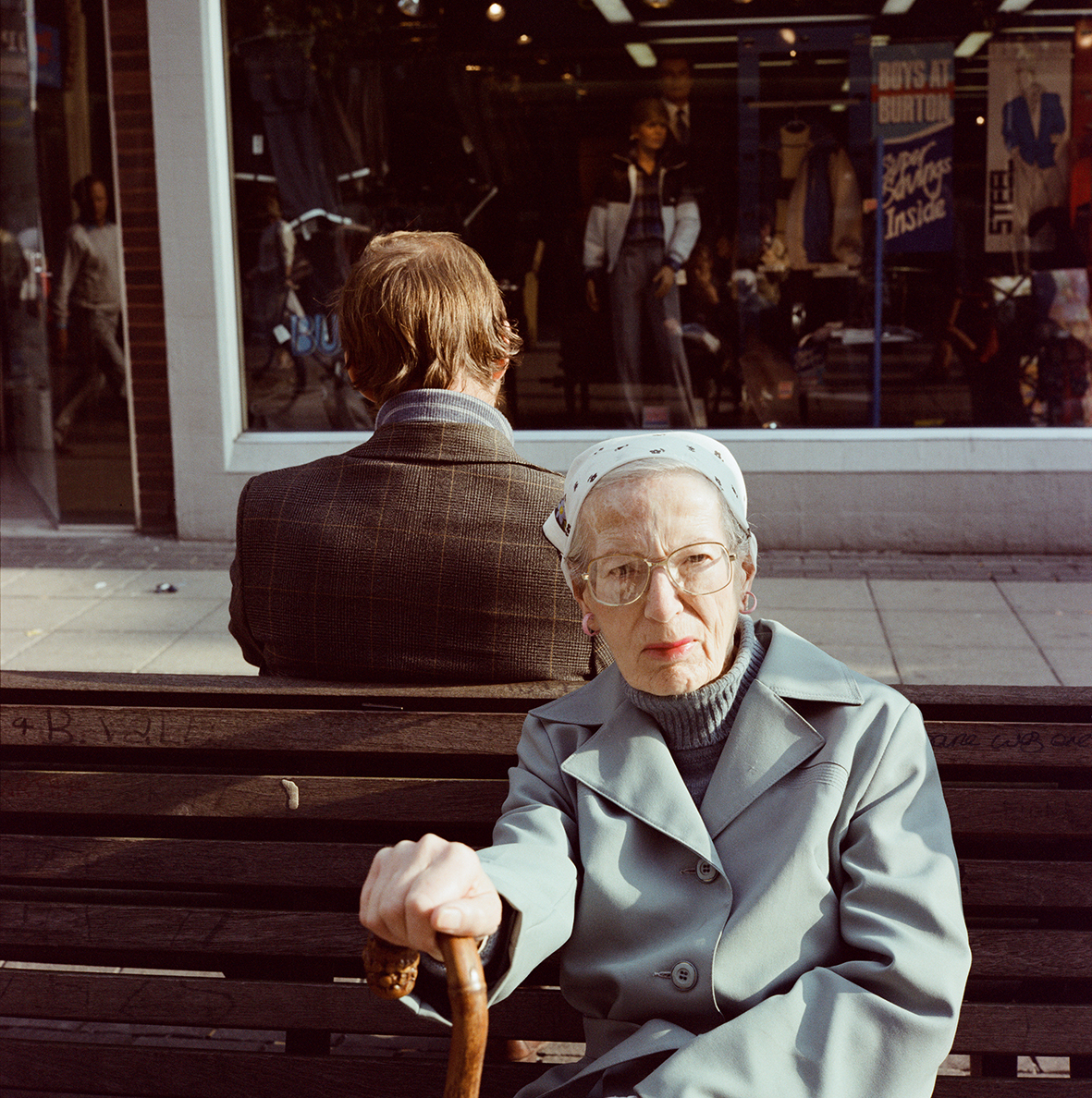 Does the fact that they were all women matter? There are various, obvious points to be made about how female artists have struggled to find legitimacy, whether because of material circumstance or industry barriers.

But street photography also comes with unique demands. It is an art that requires something singular from its practitioners, a willingness to go out into the world with a camera and document the life found there.

Some street photographers are silent ghosts, drifting around observing without ever inviting attention themselves. Others play up the machismo of it: unexpected flashbulbs going off, the shocked face incurred by invading someone else’s space. Being a woman in such spaces surely changes the nature of these interactions. Potentially it invites an entirely distinct way of looking.

“I’m slightly cautious of terms like ‘the female gaze’, purely because I worry that their recent overuse has led to their oversimplification,” says Lou Stoppard, curator, writer and editor of Shirley Baker (MACK Books). “That said, when writing about Shirley Baker, I did find it useful to think of the writing of Val Williams, who in Women Photographers: The Other Observers 1900 to the Present, writes of seeking to ‘resituate’ the work of known female photographers ‘within a women’s tradition’.”

Stoppard wonders if Baker’s commitment to capturing “the ignored, or disregarded, or silent—starting with the Manchester and Salford families whose homes were being destroyed, and, later, the playing children, the elderly, the homeless” was spurred by a sense of affinity. “As a woman in that era she experienced daily the feeling of being passed over,” Stoppard notes. “And she knew the same feeling as a photographer.”

It’s a sentiment echoed by Anna Dannemann, senior curator at The Photographer’s Gallery, who points to Levitt’s interest in “deprived neighbourhoods”. However, she also sees Levitt’s work as less that of a social documentarian and more that of an artist seeking the right materials for expression. “She did not use the adults and children she photographed for political ambitions or as examples to illustrate inequality,” Dannemann says. “On the contrary, she portrayed life on the street as a ‘theatrical spectacle’ in which the protagonists usurp their surroundings in playful ways.”

“Street photography comes with unique demands. Being a woman in such spaces surely changes the nature of these interactions”

Maybe we feel an urge to group female street photographers together precisely because of our fascination with the kind of relationship they build with their surroundings. Where are they looking? Who are they choosing to look at? How easy have they found it to walk around, capturing what they see?

In contemporary culture we are currently very alive to the ways in which women exist in public space, whether contemplating personal safety or psychogeography (Lauren Elkin’s book Flâneuse, which explores the liberatory act of exploring a city on foot as a woman, incidentally opens with a discussion of female photographers and subjects).

But much as it’s easy to focus on all the ways in which public space can be hostile, there are advantages to being a woman. People are perhaps more willing to be generous about their intentions. It’s notable how much of the best and most playful street photography featuring children came from the likes of Levitt, Baker, and Maier.

Today street photography is a changed beast. Phones have transformed the game for those behind and in front of the lens. Pioneers of photography like Meyerowitz have lamented how hard it is to take photos that don’t feature people staring at screens (another allure of the rediscovered archive: it’s always offering a different, lost world.)

Many of us are also more suspicious of being surveilled. When a photo of one’s face isn’t just something to be printed out, but potentially snapped and spread to thousands of people online, the ethics of documenting one another acquires new dimensions.

“Levitt likes an unpredictable gesture, a moment that spotlights the drama of daily life. Her work is fuelled by a spirited sense of the surreal”

Among the next generation of female street photographers, some have foregone faces altogether. Photographer Sarah Van Rij captures fragmentary details: shoes, hands, blurred reflections. “The way I’m building my frames is more painterly,” she says. “I’m more interested [in capturing] humans in a mysterious, abstract or detailed way, working with multiple layers, [to] give my viewers the chance to decipher the photo and use their own imagination to fill in a story and maybe even a face.” She sees her approach as symbolic of anonymity in a big city: “We… see each other and are among each other but we don’t really know each other.”

Others have embraced these new technological possibilities. Dimpy Bhalotia, who was one of the 2020 winners of British Journal of Photography’s Female in Focus Award, shoots on an iPhone. “Mobile phones are quick and handy,” she says. “I like how I am able to see the world without any material blockage… You don’t know what you will come across while walking on the streets. All the action I capture is all natural and spontaneous.”

Both photographers, when asked, are ambivalent about whether their gender has a bearing on their work. They don’t, it would seem, have to feel afraid of being seen as a ‘wimmin photographer’ in quite the same way anymore.

We are in the age of revived legacies. Photographers, artists, writers. So many creators, overlooked for one reason for another, are slowly getting their dues. In coming back to the cultural foreground, they ask us to reconsider our own act of looking. Where do we direct our attentions? What kind of work do we find valuable?

In discussing her attraction to Shirley Baker’s work, Stoppard quotes the photographer herself: “I was particularly interested in the more mundane, even trivial, aspects of life that were not being recorded by anyone else.” For Stoppard, it’s this interest in these humdrum experiences that makes Baker’s work so powerful, whether she’s capturing “the strange, private worlds of children” or “moments where people are, momentarily, lost or lonely, where an attempt to impress or shine has failed.”

These photographs of Baker’s, as well as Maier’s and Levitt’s, are a reminder of what it means to be thoughtful about where we place our gaze, and what we can learn from the people we are allowed to observe. They offer the pleasure of someone’s else’s small slice of life, their hopes, their disappointments, their social armour carried out into the world. They bestow the privilege of time spent in the company of strangers.

Helen Levitt: In the Street

The Photographer’s Gallery, London, until 13 February 2022 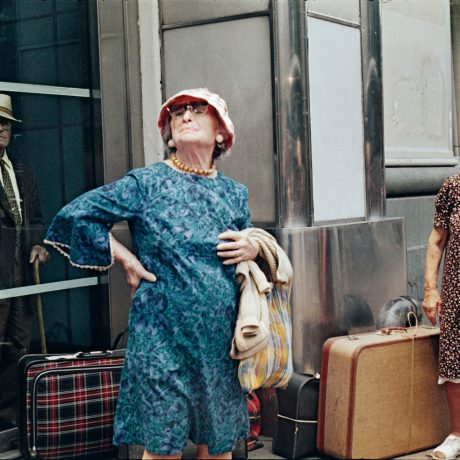