This week Marina Abramović was hit over the head with a framed portrait of herself. While signing books in the courtyard at Florence’s Palazzo Strozzi, where she has just unveiled her retrospective, The Cleaner, she was attacked by an emerging artist who claims he bashed Abramović for his art. Her attacker was arrested, and Abramović was, luckily, unharmed—posing for a selfie with gallery director, Arturo Galansino, soon after. Abramović even asked to meet her assailant to find out why he did it, telling the Italian newspaper La Republic that she’d like to find out, “Why does he hate me?” It almost appears like a meta-performance, the kind of scenario, both violent and eccentric, that Abramović often sets up in her video and performance works in order to demonstrate the strength of human compassion and empathy.

Abramović’s art is about empathy, but of course, that doesn’t always come across. Abramović might just be the Kanye West of the art world—derided and admired in equal measure. She did once raise a baby kangaroo. It’s enough for Abramovic to simply show up and sit in a room for 736 hours and call it art nowadays, but in the 1990s, before she joined the cultural elite, she had to work very hard to get our attention. She once, for example, ate a raw onion. Incidentally, onions are known for their healing properties—in the 1500s, a common cure for the flu was wearing socks filled with raw onions to bed. Unsurprisingly, there’s yet to be a scientific study to prove the veracity of the treatment.

“The camera pans in close on Abramović who is holding an oversized onion, nails and lips painted bright red. She chomps down voraciously on the onion”

The Onion is a video performance recorded in 1996 but largely forgotten since—after all, eating raw veg is hardly the strangest thing Abramović has done for the sake of her art. The camera pans in close on Abramović who is holding an oversized onion, nails and lips painted bright red. She chomps down voraciously on the onion, declaiming as she eats that she is “tired” of many things—taking planes, waiting for things, making decisions, pretending to be interested in conversations about art at openings and “being ashamed of my nose being too big, of my ass being too large, ashamed about the war in Yugoslavia”. Pre-plastic surgery rumours, with the war in Yugoslavia still ongoing at the time, The Onion, for all its political panache, represents a period in the artist’s career in which food also featured regularly. The Onion was made in the same year as the idiosyncratic Spirit Cooking—recipes for actions and thoughts that culminated in an installation of violent instructions painted in pig’s blood on the white walls of the Zerynthia Associazione per l’Arte Contemporanea in Rome, in 1997.

As her list of complaints goes on, the artist continues to tear into the onion with aggression, her eyes streaming, her lipstick smeared and smudged. The work connects with much earlier performances, such as Art Must Be Beautiful, Artists Must Be Beautiful (1975), in which self-inflicted suffering through a repetitious act has the effect of a self-exorcism or quasi-spiritual ceremony, using physical pain in symbiosis with inner thought and self-reflection—something that’s still at the root of Abramović’s work, and, even when she doesn’t plan it, seems to be part of her life.

Until 20 January at Palazzo Strozzi, Florence 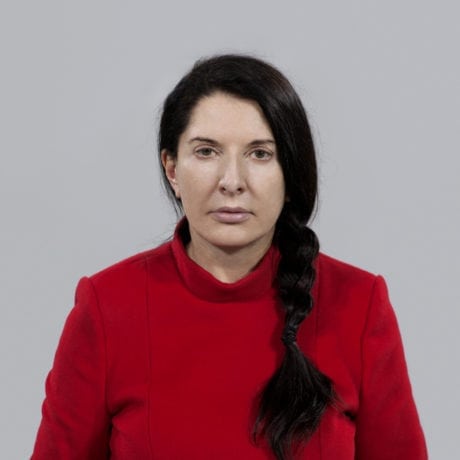