Time stands still in the photographs of Tina Barney. She has made a name for herself photographing the wealthy elites of America’s East Coast, notably her own family and friends, since 1976. Taking us into their homes and intimate surroundings, she reveals her eye for the fashion and interiors that shape them. Heavy fabrics and deeply coloured walls frame her subjects as they stand for the picture, casual in their familiar environment but posed for the click of the camera. Barney upholds a long history of portraiture, from Titian to Rembrandt, frequently choreographing the resplendent scenes that she captures––selecting what to include and what to leave out. The resulting images are infused with a powerful sense of nostalgia, and it can be difficult to put a timestamp on them. Elegantly dressed women and handsome men move amidst large and beautifully decorated houses, expressive and poised. They are suggestive of the stories that animate our lives, domestic dramas hidden behind closed doors, as idiosyncratic and restless as they have always been.

A comprehensive monograph, Tina Barney, was recently published by Rizzoli USA, spanning her four-decade international career. While going through her archives last year for the book, she came across a series of 8×10 landscapes, snapped in the summers of 1988 and 1989 and then forgotten. “When I wasn’t photographing people I wanted to keep working, and it’s always hard to find people to photograph, so I decided to try some landscapes,” she recalls over the phone on a cold January afternoon. The images take a wider view of the Rhode Island life that she knows so well, moving beyond the interior space of the home. Suburban roads, detached houses and rocky beaches are rendered in a bare palette of pale greys and blues, interspersed with bursts of bright colour. The rediscovery of these photographs prompted Barney to embark on a new series of landscapes––the first time in over thirty years that she has departed from portraiture.

Her new photographs of Rhode Island reveal that remarkably little has changed in the area, or at least that Barney has a knack for uncovering the timeless details of a place. She has chosen to pair together the two landscape series for an exhibition at Paul Kasmin Gallery in New York, blurring the old and the new into one. “Many people couldn’t figure out which images were taken when,” she confirms, echoing the nostalgia that runs through her portraits. “I don’t think a lot of people realize that in some of the pictures I’m standing almost in the same place thirty years later. I’ve always maintained that not much has changed in all the years that I’ve been photographing, and this is really living proof.”

What is it that she looks for when composing her photographs? Her eye for colour and lines is distinctive, and I am curious about how this translated from portraits to landscapes. She considers my question quietly for a moment; Barney is consistently precise in her responses, quietly at ease when taking the time to articulate herself. “In my interiors, you can use the furniture to make an interesting structure––or you can use the people themselves. Out there in the world, I am not using lights and have no control over the situation. I can’t move it or change it, I can just move myself. So it’s really structural reasons that I might choose something over another, and the light and the weather.”

An American flag unfurls prominently in one photograph, while in another it can be spotted flying above a white flat-roofed house. Barney’s images are inextricably American, and I enquire about her relationship to the country today. Has it changed since she first began her photography career? “I can’t really make any comment on the rest of the United States because I just don’t know it well enough. I just can say that I feel as if I know this place that I’ve lived in and photographed in, Rhode Island and also border state Connecticut, pretty darn well. I have a deep-seated feeling about the place and care about it, and that’s what’s important,” she says. “When I first began photographing at the age of twenty-eight, I did that because I felt that whatever was around me was going to disappear, and what’s comforting is that it really hasn’t.”

“I have a deep-seated feeling about the place and care about it, and that’s what’s important.”

She continues: “What these pictures from 2017 are saying is that, really, nothing has changed. Maybe there are no telephone booths on the street anymore, or maybe the telephone wires and poles have been taken down for aesthetic reasons. Of course styles change, but because there are really no specific people you don’t see the ageing of people. I know that some of the people who were in those pictures from the eighties are gone, but that’s not the focal point. So let me just say that I feel the same, but because of so much time passing I have an even stronger feeling of nostalgia, or caring about the place, that I want to protect it and save it and keep it.”

We focus now on this pervasive sense of nostalgia, so strongly upheld in Barney’s landscapes from the 1980s to today. I ask, is this something that is very important to your work? “Very,” Barney responds firmly. “If you look up the definition of nostalgia, I think it says ‘a longing to go back to a past time.’” She pauses, and then: “Can you look it up while we’re talking? That’d be fun to see.” I search for it online as she continues to speak: “I think that most people would agree that nostalgia is a sad feeling. It’s not a happy, joyful feeling. It’s a feeling of longing, yearning to go back to the past.” I cut in to read out that it is apparently derived from a Greek compound that originally meant pain or ache. “Oh, I love it!” she exclaims. I find a definition for nostalgia that explains it as a sentimentality for the past, particularly for a period or place with happy personal associations. “Oh, that’s really interesting,” she says. I suppose that longing, while it might be for happy times, is not a happy experience in itself.

“I think that most people would agree that nostalgia is a sad feeling. It’s not a happy, joyful feeling. It’s a feeling of longing, yearning to go back to the past.”

“I agree with all of the above, and that’s exactly what it is,” Barney says, emphatically. “But along with that, because you want to go back to a happier time, you want to keep it that way, the same way that it was in the past. You know, those feelings I had when I was twenty-eight, that’s pretty young. So it’s not because I’m older now, back then I thought the same things I do now. That feeling that you’re going to lose something, something so good, and then you’re not going to have it anymore. And then, that draws into politics, finance and all kinds of things.” We reflect on specific images in Barney’s Landscapes series, each of which tells its own story of the comings-and-goings of Rhode Island communities. Individuals fade into a bigger picture of an all-American town in Parade (2017), while The Tennis Court (1988) has a voyeuristic edge to it.

Barney has always observed her subjects with a certain intimacy; she maintains a fly on the wall proximity while remaining hidden just out of sight. Her photographs have a painterly quality; they are rich compositions which observe structural patterns and colour. She has a roaming, curious and precise eye, much like her conversational style. The Landscapes hold onto this elusive quality, pausing a moment in time that would otherwise slip away. They prompt us to remember and to imagine, to revisit and to look again. 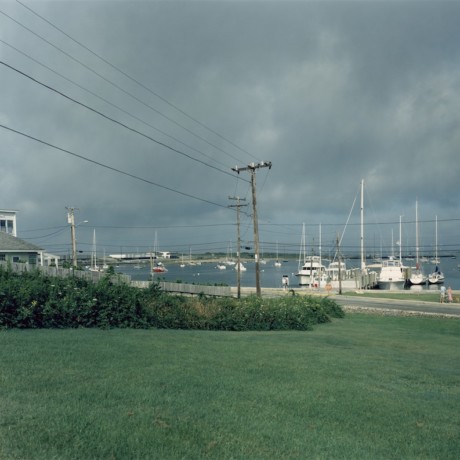