When it comes to the subject of fertility in culture, fables and folklore are seldom far away. There is comfort in a well-structured narrative, in the idea that things happen for a reason, that life proceeds with a certain logic. However, we should be mindful about which stories we turn to and be attentive to what new misconceptions they might generate.

Lindsey Mendick’s moving, funny and very personal recent exhibition Hairy on the Inside was inspired by the artist’s experience of polycystic ovary syndrome (PCOS), a condition that, among other impacts, reduces fertility and increases hirsutism. In the show, the audience is invited to join a group of she-werewolves sitting anxiously in a medical waiting room, surrounded by aspirational paintings of werewolf mothers with adorable children.

Wolves have long menaced young women in the dark forests of fairyland. Here, though, the fear is of the beast within, its wolf hair threatening at every moment to burst through a woman’s skin. In a piercingly frank film shot by her partner Guy Oliver, Mendick recounts the jibes, casual cruelty and self-consciousness that have accompanied the hair growing from her face and body.

The visual references for Hairy on the Inside come from werewolf stories, but Mendick is more troubled by modern morality tales. One tribe of contemporary womanhood tells her that as a good feminist she should accept and celebrate her body in its ‘natural’ state. Another commiserates, informing her that as a young woman she should mourn the loss of her fertility. In the name of choice, freedom and modernity, society remains curiously determined to solicit compliance to its new myths.

“Think positively and your body will follow”; “Stop trying and it will happen”; “Just relax and stop thinking about it.” Just legible amid the optic fuzz of Sally Butcher’s Infertile Platitudes of Embodied Emptiness series (2020), these are words of ‘encouragement’ offered to women going through fertility treatment. It’s a litany that comforts the maternal speaker in their possession of a compliant, fertile body, and conversely suggests a degree of fault in the infertile body. This implicit blame is bound up in broader issues of loaded language surrounding involuntary childlessness and women who ‘fail’ to conceive.

Butcher’s nine Sonograms (one for every month of human gestation) borrow the graphic style of ultrasound images but are in fact direct prints of the artist’s belly. Earlier this year, she released them on Instagram, using the now established vernacular of pregnancy announcements. Butcher’s prints show only the skin around her navel, stubbornly resistant. Within the current flourishing of art on maternal themes, as in society at large, infertility often remains unseen and unmentioned. 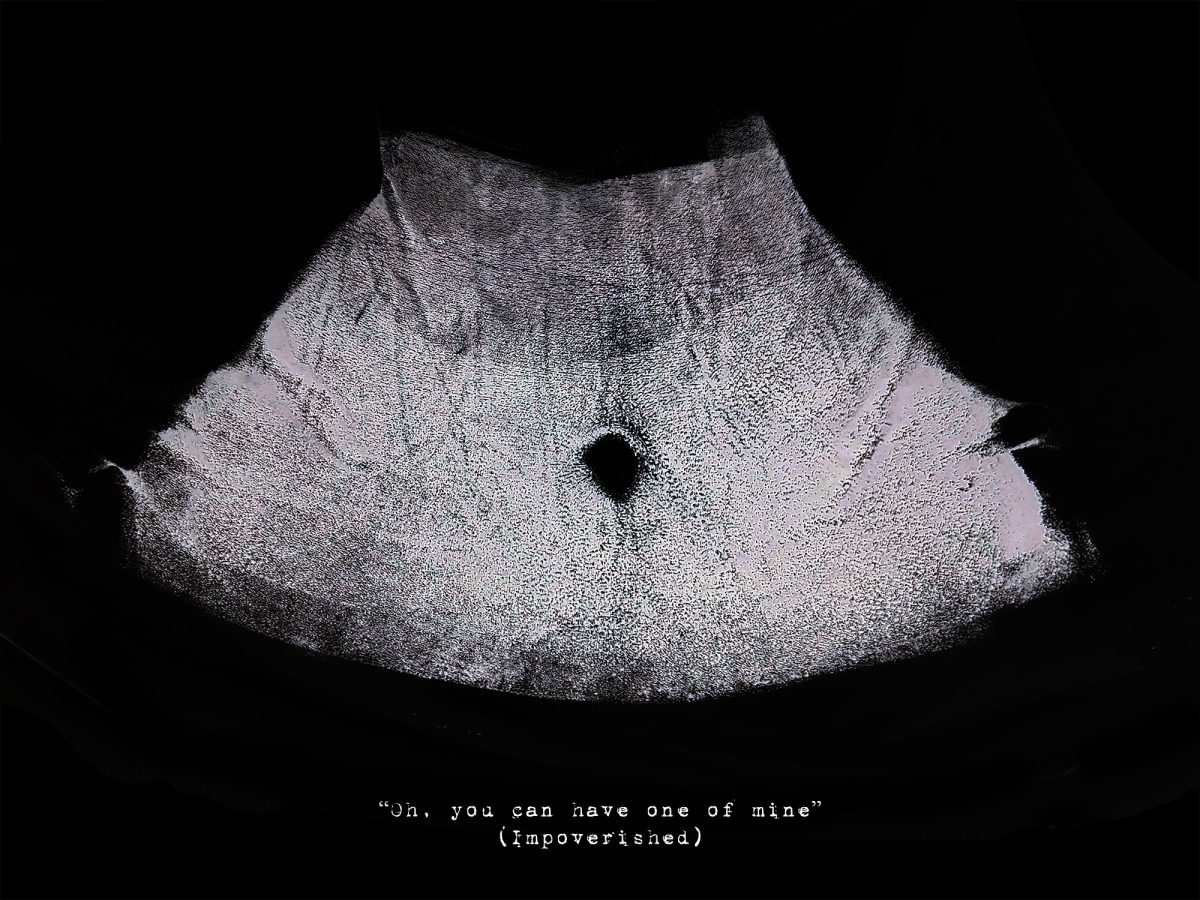 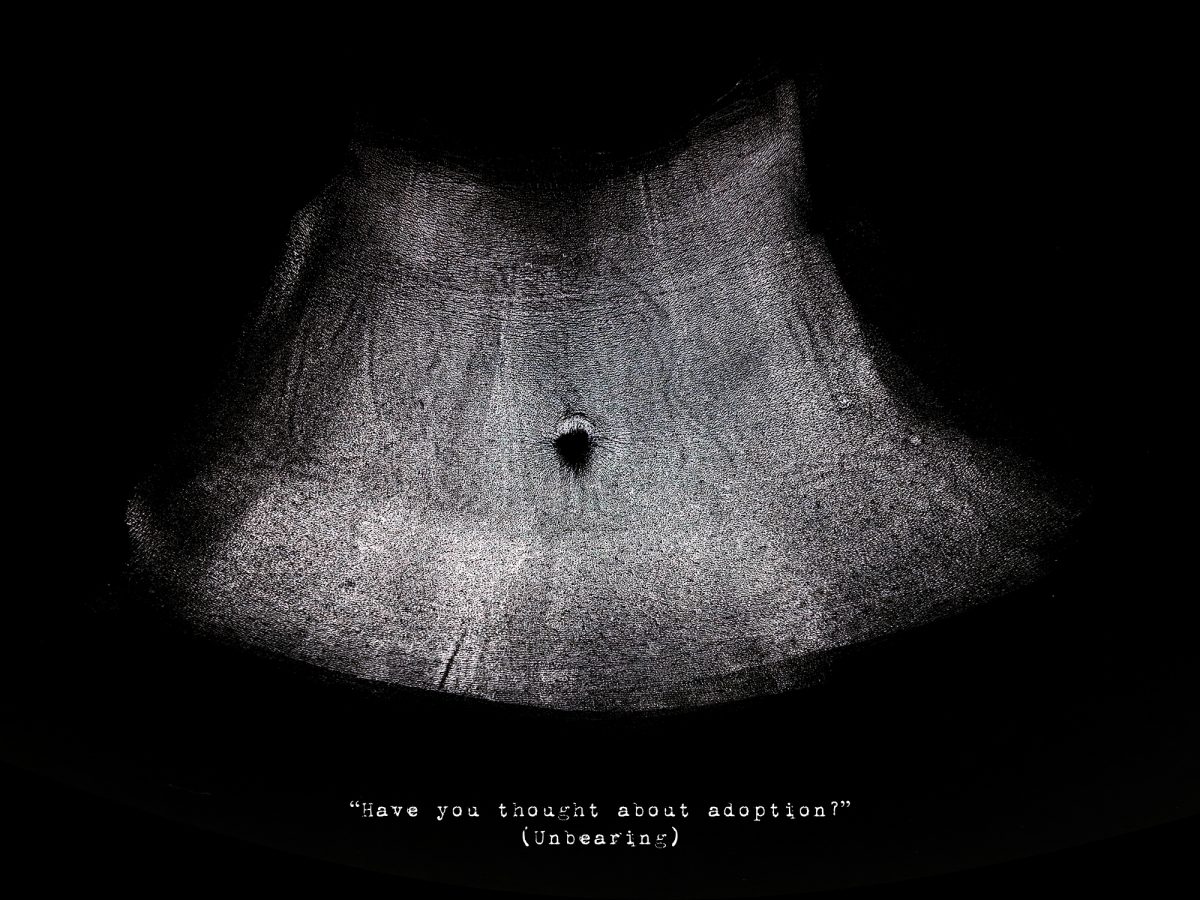 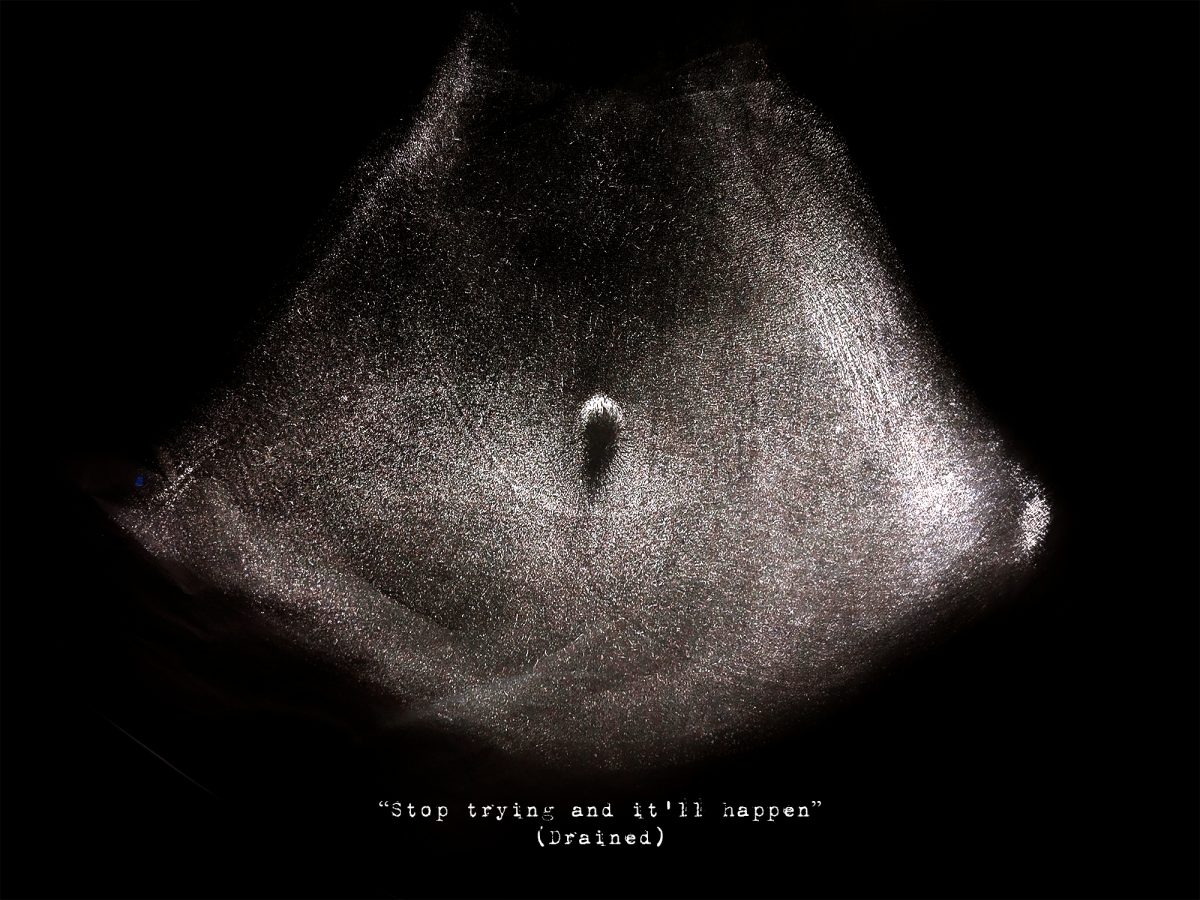 How do you give visual form to an absence, to a not-yet or perhaps not-ever event? Enter the old stories: Elina Brotherus’ exquisite, if almost unbearably painful, photo series Annonciation (2009–13) draws on the historical conventions of Catholic art which imagine the archangel Gabriel appearing to the Virgin Mary informing her she will conceive a son. Borrowing the archways framing the Virgin in paintings by Fra Angelico and Piero della Francesca, Brotherus seats herself attentively at her kitchen table, waiting for an angel to complete the picture. But the angel never comes.

We follow Brotherus through five years of IVF treatment, through hormone injections, moments of hopeful fantasy, cascades of tears, and also of blood. Writing of Annonciation Brotherus invoked the Hollywood fables in which suffering and perseverance earn reward. “In reality, the success stories are rare, but they are the ones we hear of,” she writes. “For the rest of us, this biased broadcasting is upsetting. It’s as though the general public should not see the inconsolable reality.”

“Within the current flourishing of art on maternal themes, infertility often remains unseen and unmentioned”

In one concluding photograph Brotherus shows herself from behind, gazing across a snow-covered landscape. Finally, she turns wearily back to camera with an engraved pendant spilling over her collar: ‘c’est la vie’ it reads, that’s life: it passes, it ends, it does not come. As one of Brotherus’ titles suggests, she is The Last One in My Line, a genetic full stop.

In Jessa Fairbrother’s Conversations with My Mother, the artist likewise positions herself as the conclusion of a matriarchal lineage, the end of a story. Through photographs, embroidery, collage, performance to camera and an artist book, Fairbrother explores a double loss, her mother to cancer, and her own fertility: “the relationship I had with my mother and my own inability to become one.”

Using photographs taken during an exchange between her mother and herself in their final months together, as well as found family images, Fairbrother maintains a conversation with her mother by lavishing acts of care on the images: embroidering them; enrobing them in dried petals from her funerary bouquets and leaves from her garden; re-staging them with her own body; binding them together. Later this month, Fairbrother’s work will hang in the Victorian galleries of Bristol Museum, opening the conversation up to include George Frederic Watts’ Love and Death (1875) in which the angel of love stands before the House of Life struggling to push death back from its door.

In a presentation last month, artist and writer Ciara Healy-Musson ran through layer upon historic layer of the vilification directed at infertile women, leading to a point in the 20th century where “the involuntary childless woman found herself caught in a place where institutionalised medicine tacitly or overtly accused her of being responsible for her own infertility, while many second-wave feminists equated her desire for children with her oppression as a woman”.

Healy-Musson also spoke with candour and courage about her own childlessness, a subject she had for many years not discussed publicly both because it was too painful, but also because it still felt taboo. She showed works from Brotherus’ Annonciation series, but concluded with a later image, from the series Carpe Fucking Diem in which the artist presents life continuing on the far side of heartbreaking loss. Brotherus poses holding her characterful dachshund dog in one hand and flipping her middle finger with the other. The work is titled My Dog Is Cuter than Your Ugly Baby (2013).

Searching for old stories with which to tell a new story of infertility, Healy-Musson reached for the selkie, a mythic creature common to Celtic and Norse tradition, which could change from seal to human form and impregnate women with a longed-for child. She proposes a new narrative that brings in alternative forms of kinship, and suggests a role for her own dog as a longed for selkie baby. The selkie is a subversive myth, a riposte to morality tales, but its old story of interspecies cooperation feels like an apt fable for our time.