Zanele Muholi creates a distinctive tone: their photographs are typically portraits, with the subjects’ eyes often locked on the visual activist and camera lens, emphasising feelings of exchange and solidarity. These images are shot in Muholi’s signature black and white, a deliberate choice for its timeless quality. Such decisions are emphatic in their work, and—as their current exhibition at Tate Modern in London proves—have been present since the earliest images, which were taken almost twenty years ago.

Muholi’s work constitutes acts of resistance by existence; a mantra they often discuss. Their constant return to portraits of other people, and more recently of themself, is an insistence on existence, and on visibility. By photographing LGBTQIA+ people, they document these lives, and sometimes the documents become commemorative. They bear witness to trauma, violence and abuse, but also to survival, healing and thriving. The portrait can, must, contain all of that life in its gaze. At the centre of Muholi’s exhibition at Tate is their ongoing, incomplete masterpiece, Faces and Phases, a work spanning more than a decade and featuring more than five hundred photographs, which illustrates their unfaltering devotion to this idea. It is a process that has inevitably at times been difficult and overwhelming for them.

“They bear witness to trauma, violence and abuse, but also to survival, healing and thriving”

Faces and Phases remains Muholi’s most famous work to date, and its aim is to change the lives of the people in the pictures, people in their own community, through the act of being seen and recognised. These photographs must function by being direct, striking the viewer—particularly the viewer who does not relate—and stopping them dead, making them stare, linger and engage. Muholi is masterful at creating arresting portraits; their most recent series, Somnyama Ngonyama (2012–ongoing) is an evolution of Faces and Phases that employs all of the power of the portrait they have practised for so long, and amplifies it with self-staging and play.

Given the intent of the work there is little space for levity in their black and white photographs. Yet this does not mean Muholi isn’t interested in joy, and often they find quiet, intimate moments of happiness, comfort and safety where least expected. The earliest body of work on show at Tate is titled Only Half the Picture (2002–6). It documents survivors of gender-based violence and hate crimes in South African townships.

“It is a moment of solitary content and contemplation, and it subtly places the viewer in Muholi’s place”

The photograph, Not Butch, But My Legs Are, taken in 2005, is a self-portrait; the camera is pointed down at Muholi’s unshaven legs and slipper-clad feet, and a white cup of black coffee which is full to the brim. The light strikes perfectly across the scene. With its geometric forms and symmetry it almost feels Modernist. It is a moment of solitary content and contemplation, and it subtly places the viewer in Muholi’s place, in their body and shoes; the viewer looks down at the picture as if these are their own legs. The playful title is a reminder then of what is being looking at: these unshaven legs of an LGBTQIA+ person are themselves an act of resistance, simple, but no less important—there is no hierarchy between this and the other images in the series; images of breasts bound with bandages, washing, laughing, scars. It is an incisive, moving portrait of self-care and survival in which everyday rituals take on new vitality and meaning.

Not Butch is an uplifting image, and presents another way of viewing Muholi’s later portraits, focusing on what we can see; how we can appreciate and experience the world in a different, but material and physical way. As they put it “From birth on, we are taught to internalise [gender binaries’] existences, sometimes forgetting that if bodies are connected, connecting, the sensuousness goes beyond simplistic understandings of gender and sexuality.” 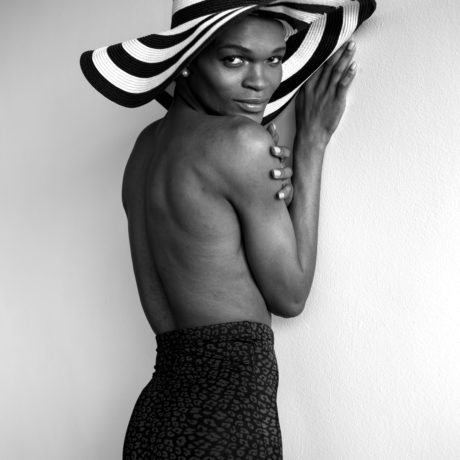