This year has been an unprecedented time for Japanese feminists: since April, the rise of the monthly Flower Demonstrations in Tokyo against consecutive unjust rulings on sexual assault cases have started a revolution of sorts. The #MeToo zeitgeist has finally caught on in a country ranked 110th in the 2018 Global Gender Gap Report; a country where women continue to be sexually harassed and socially discriminated, but are expected to be subservient caregivers who obey the rules of the heteronormative patriarchy. The public demonstrations are spreading to cities all over Japan, and as the women’s anger, frustration and sadness becomes more visible, artist Maki Makie’s light-hearted and mischievous semi-nude and erotic images stand out: empowering both women and men with their unwavering openness; an affirmation of the self, taking a defiant stance against authority.

Makie, who labels herself playfully as “a fifty-three-year-old selfie-taking ripe female”, but actually shoots with a solid sharp technique acquired over a long career as a commercial photographer, is deeply aware of the feminist aspects seen in her self-portraits which she started taking in 2015. “Feminism is certainly an underlying theme of my works. When I was in my twenties and thirties, men were constantly chasing me. I had a soft and gentle disposition that seemed to make them think they could do whatever they wanted. I was hurt that they only saw me as a sexual object and came to distrust them. So I spent those years hiding my femininity as much as I could to keep these men away from me. But when I experienced the menopause, I felt like I could embrace my femininity and desire as I pleased for the first time.”

Makie had been trying to find her own creative expression for two years before that, so when she started her semi-nude self-portraits and came up with her debut works like the Hotate (Scallop) series and Ketsu Batto (Ass Bat) it was a happy marriage between the rush of pure femininity she was experiencing after menopause and the urge to create something extremely funny and ridiculous which came naturally to her. “I think I am a born entertainer as I come from Osaka where making jokes is a daily routine. My family was very open. For example, back in the day, Japanese TV exposure restrictions were loose and women’s breasts would sometimes appear, and my mom would say things like, ‘Hey, look how large her nipples are!’”

“When I experienced the menopause, I felt like I could embrace my femininity and desire as I pleased for the first time”

What sets Makie’s works apart from the waves of young photographers exploring the female gaze today, shooting raw, self-nudes from their bedrooms and beyond with their cosplay and body paints, is the fact that she is in her fifties. Her body and desire are no longer connected to bearing children, and at the same time, she is comfortable in her own skin both career-wise and in her private life, giving her freedom to be her true self. Her husband is supportive and even acts as an assistant when she goes on photo shoots.

Both women and men are attracted to Makie’s works because they are the opposite of that: overwhelmingly open, independent, self-affirmative and desire free of ulterior motives. “I think people should read more of Japanese classic literature. I’m deeply influenced by Man’yōshū [one of the oldest and most respected collections of Japanese poetry compiled sometime after AD 759 during the Nara Period] and that’s why I made a zine with the same title. Surprisingly, compared to the samurai society that was to follow, the Nara period was a matrilineal society where women were allowed to own private property, so men and women had equal rights, and the general atmosphere was very easygoing. It was popular for husband and wife to live apart and women were freer to be true to their feelings. In order to have control of your own desires and live an honest life, women must be independent economically, and that ultimately creates a very open and tolerant society; that’s what I see and admire in Man’yōshū.”

“In order to have control of your own desires and live an honest life, women must be independent economically”

Makie says she doesn’t feel uncomfortable with having male fans, most of them middle-aged and older, but they sometimes make rude remarks. She makes the feminist intent of her works quite clear in her mission statements and very popular tweets that often admonish sexual harassment, but that doesn’t seem to put them off. She laughs, saying: “I think men just can’t read these days! They are so good at transforming meanings into what they want to read against what is actually being said. But I’m used to them… having spent more than thirty years working in a male-dominated field. I rarely get emotional and can handle them without a problem. If they like my work and are making purchases, that means more funds to make new work, so I’m not stopping them!”

From 22 August to 9 September at Cafe Hundred Red, Itabashi-ku, Tokyo 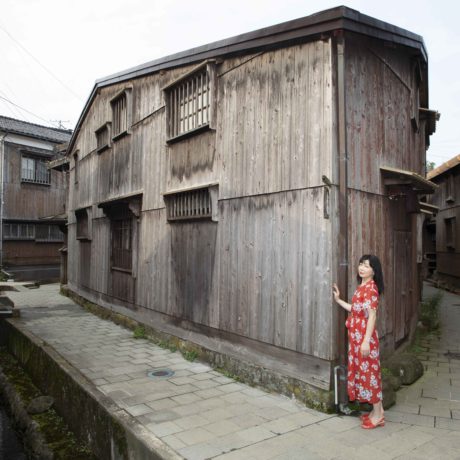