Rachel Maclean’s dystopian fairytale Feed Me is a sixty-minute film set in a world run by a malicious toy corporation called Smile Inc. Maclean plays all the characters herself, from a Scottish granny to a blue-skinned business executive and a hoard of little girls. She dons rubber gloves, face paint and the occasional prosthetic nose, filming against a green screen before adding backdrops and special effects in postproduction. The smiley appears everywhere, a mutating, feel-good emblem stitched into clothes, transferred onto foreheads, flashing on phone screens and rotating in the sky like a great emoji god.

Across fifteen films to date, Maclean has developed a very particular phantasmagoric palette, both bingey and mesmerizing at once, made up of Polly Pocket pinks and Barbie blues. It’s a hardcore toonland in which perverse businessmen stomp through synthetic palaces, accompanied by digital sparkles, honks and chimes. All Maclean’s films are dark satires that expose the cult of positivity necessitated by the capitalist belief system, where dreams really can come true—if you just work that little bit harder.

While she has built a cohesive body of work over the years, Feed Me is a standout. It’s the first time Maclean has written her own script (rather than stitching together found audio) and the derisive storyline provides an ingenious and disturbing commentary on capitalist hedonism, all through the lens of fairytale tropes.

“The smiley appears everywhere, a mutating, feel-good emblem stitched into clothes, transferred onto foreheads, flashing on phone screens and rotating in the sky like a great emoji god”

Unlike her other films, which often feature adults or boys, young girls are the protagonists of Feed Me—tweens with warped turquoise eyes, who are Smile Inc’s ideal customers. It’s a masterstroke on Maclean’s part because the figure of the young girl allows for her most precise analysis of commodity-lust yet. On the one hand, the girls are fully seduced by the sales propaganda, which like cautionary tales, act as a kind of social grooming.

They are integrated addicts, texting in Happychat and performing happy-themed songs in Smile Inc talent shows. But the figure of the young girl is also a consumer typecast. As the philosophy collective Tiqqun pointed out in their book Preliminary Materials for a Theory of the Young-Girl, the young girl is a “not always young, she is not even female”, but instead a total product. Adults are enticed to shop in young-girl mode. As if to illustrate Tiqqun’s point, all of the characters in Feed Me are infantilized or nannied. The business executive wears a baby’s bib and checks his shares on a pink toy computer. The beast has his own replica plaything, a furry blue Happychat toy. Whether or not Maclean read Tiqqun is unknown, but it’s fascinating to see this theory in practice.

Feed Me also draws a startling connection that I’ve not seen elsewhere, between the manicured world of children’s television and the candified world of pornography. In both, bodies are airbrushed and idealized. The business executive in the film is exposed as a paedophile—playing on another monstrous stock character, this time drawn from the tabloids. Smile Inc’s silicone toys might well be glittery dildos or rubber fleshlights, which often deploy the same girlie palette. Eventually, the girls destroy the corporation by their sheer desire for more. Nobody is safe in Maclean’s cautionary utopia, as all surrender to the higher power of consumerism.

At YSP until 17 June, then various venues, as an Arts Council Collection touring exhibition 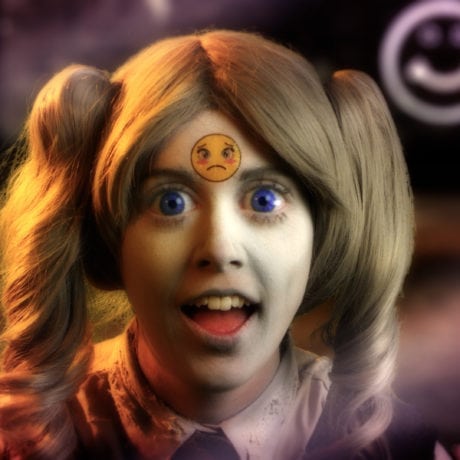