John Pham‘s new graphic novel, J&K, could be seen to be a celebration of medium and process and form as much as a narrative; but Pham’s storytelling prowess makes it both. We follow central characters Jay and Kay (perhaps a reference to archetypal slacker movie names) as they sort of doss about, yet the quotidian is always gloriously surreal.

When Jay gets a large, bulbous spot on her back, for instance, it pops and becomes a new pal in the form of a gloomily grotesque little creature that she names Bacne. Little Bacne joins them at a party that night, thrown by their mate Eggy (naturally), and helps the pair to smuggle out a couple of taco rolls.

The book is packed with sweet and hilarious references to pop culture—who else can the quiffed pop-star miserablist named Pomp à Dour (“the most dramatically miserable pop singer in all of France”), beloved by Eggy, be but Morrissey? This interaction with Eggy, just after he’s been pied off by the girl at the orange juice stall, tells us a hell of a lot: “His songs give comfort to the tragically sensitive, like me!” he says. “Why do hot chicks always reject me? I know we’re perfect for each other! We’re both the same kind of sad.”

Our protagonists’ meaningless meanderings make the whole book feel very much like the sort of teen-aimed 1980s films of sleepovers and hangover duvet days: no one really does a lot, other than interact with certain archetypes and subcultures. Here, there’s the pervy, mean dudes in the park who always seem to have some sort of dumb “say what you see” remark; and the cooler older kid “Glumpires”, who terrify Jay and Kay. In a typically John Hughes-like twist, we soon see the Glumpires sitting with their ghetto blaster, deflated that the pair “ran through us like we had the plague”. Turns out they don’t want to bully them at all—they just really “admire their style”. 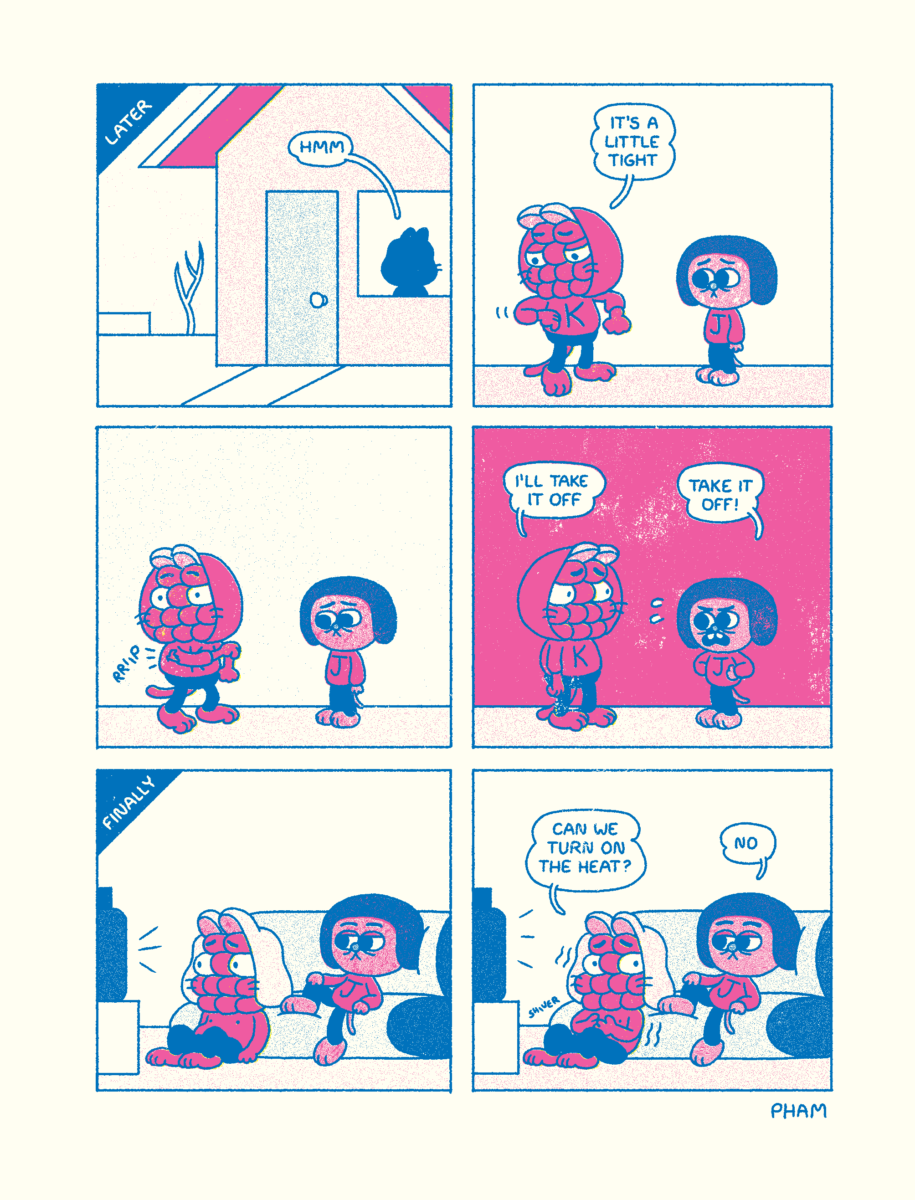 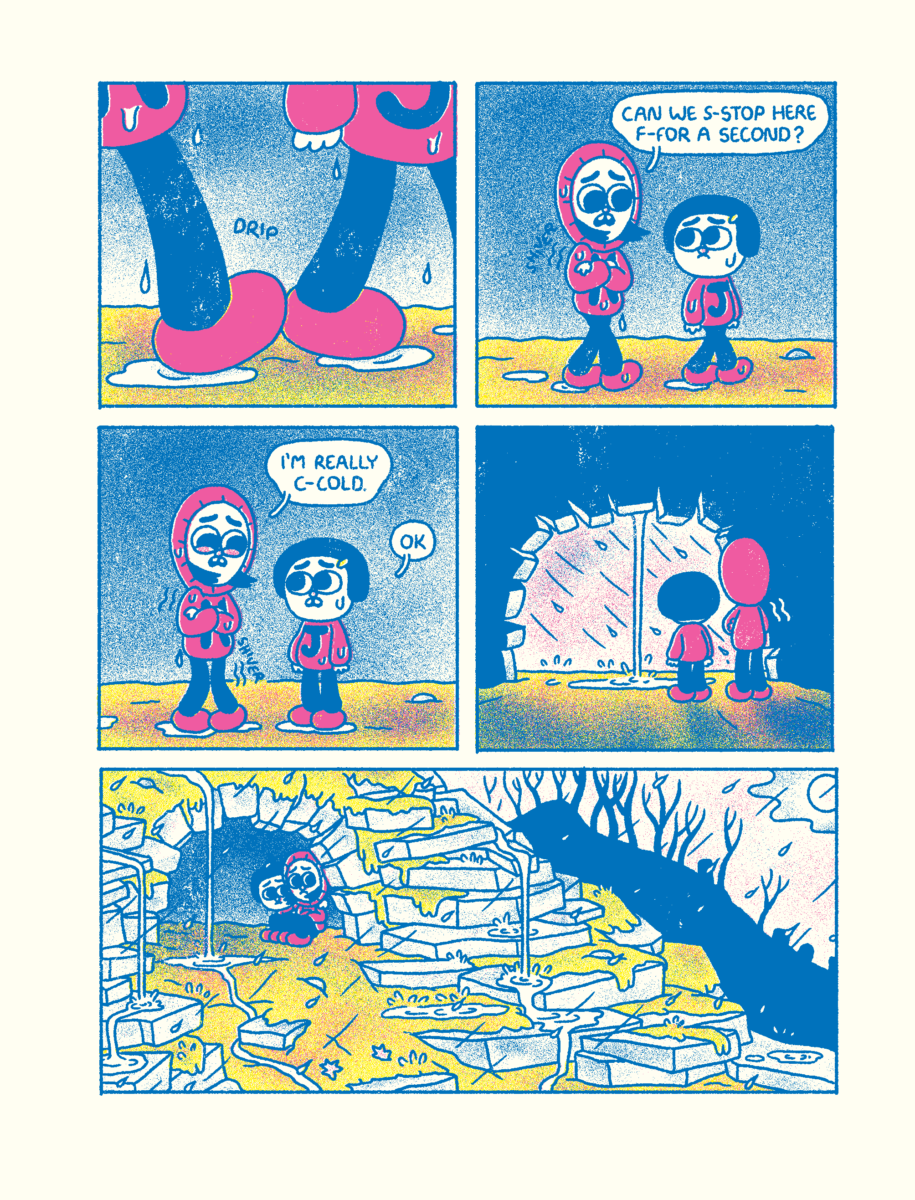 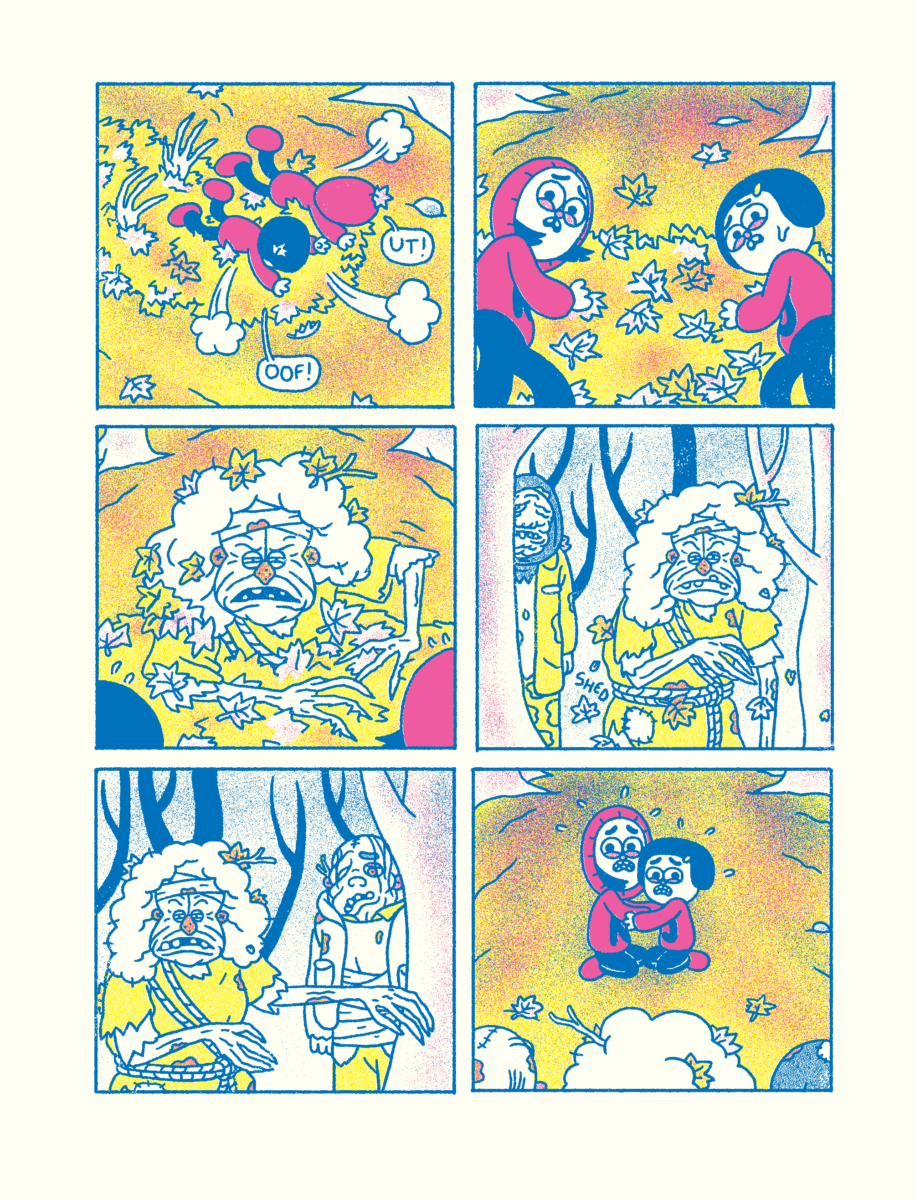 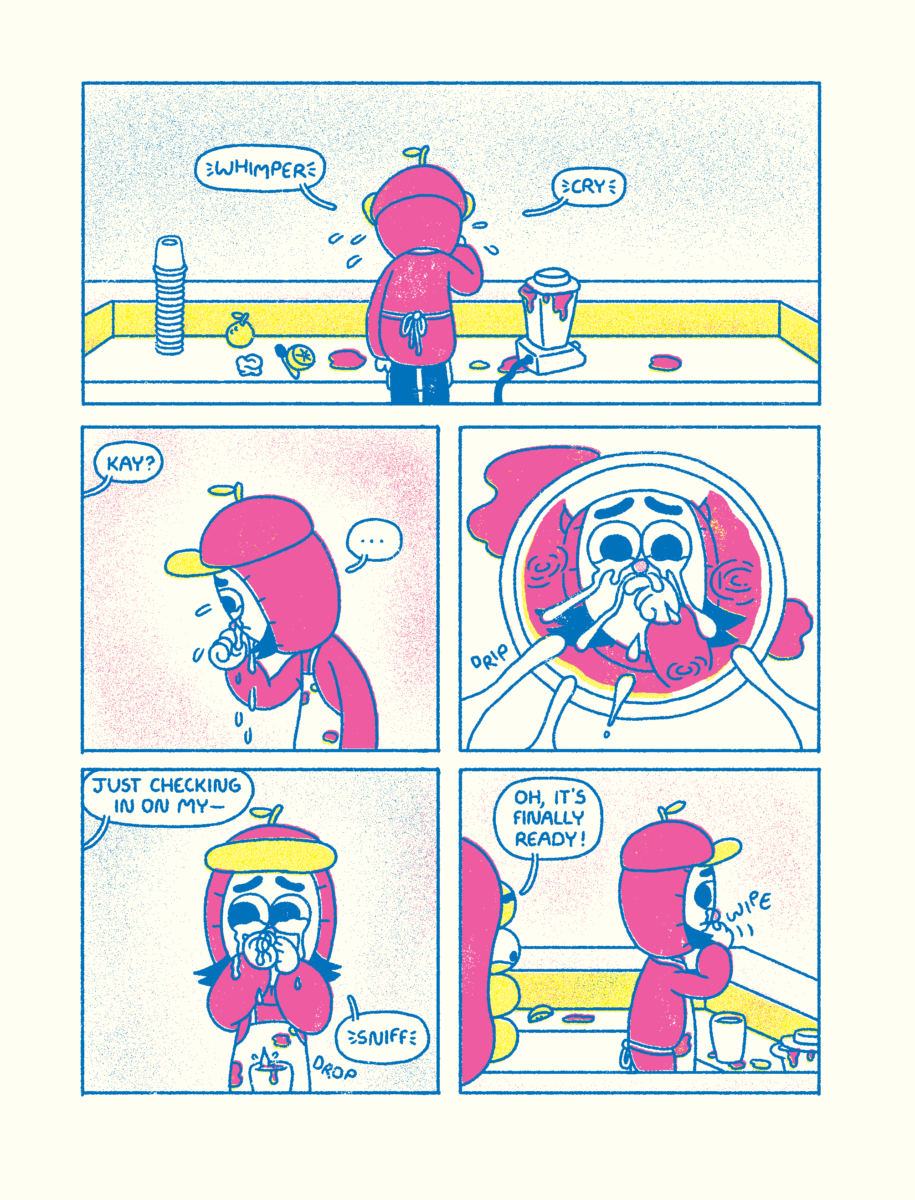 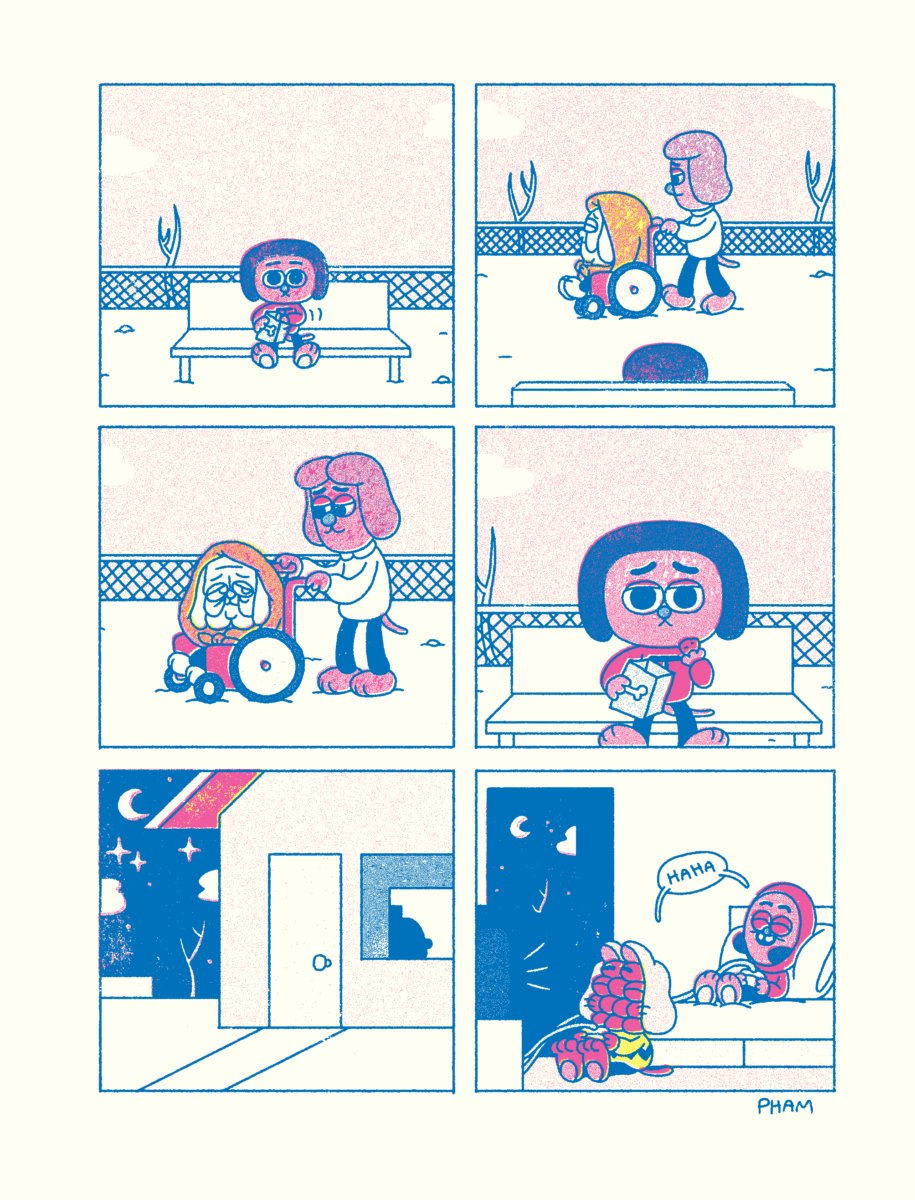 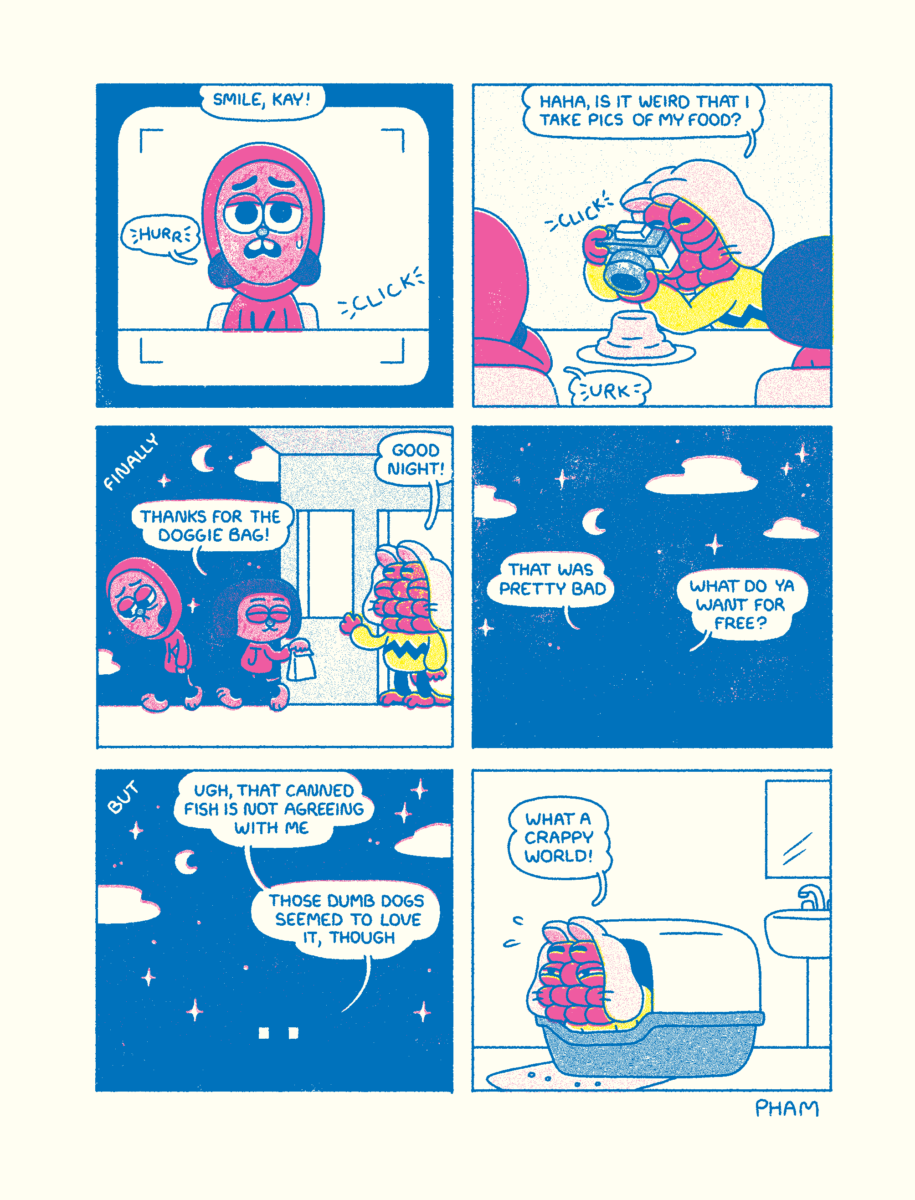 Things continue along this sweetly mundane, teen melodrama route most of the way along the novel until the final third or so, when thing take a rather more abstract turn. We’re tugged out of the world in which we’ve become immersed, where things like Jay and Kay’s strange appearance and prediction for weird milkshake flavours and ability to create new life from pus-packed pimples seem totally normal.

“I know we’re perfect for each other! We’re both the same kind of sad”

Where before, the “bummers” that punctuate the book have been the typical “too skint to buy comics”, “no girls like me” style problems that we can brush off; now things become a lot darker. It feels as though a new barrier has been erected between us and the characters as the panels suddenly take on a firmly comic-like appearance, and we’re suddenly made aware that the main characters, which until now have felt so incredibly real, are in fact cats and dogs.

Things don’t end well—why, we won’t say, as not to ruin the book for you. But it’s a testament to Pham’s skill and his nuanced way of using character design, narrative and minimal colour palettes to create a powerful connection with his protagonists that he can wring such emotion from his readers. While this may have something to do with Jay and Kay’s cuteness, or having spent so much time with them, there’s a genuine spark of humanity of sorts here. We’re rooting for them the whole time, despite them being at turns quite pathetic, covered in snot, lazy and wholly two-dimensional (in form, not personality).

Whether or not you get into the story, though, Pham’s artistry is a thing to behold: the speckled effect of the printing, the stunning effect to which he weaves entire words from two-tone processes and smart approach to graphic design principles like typography, advertising copywriting and layout mean that each spread could be a discrete artwork. We thoroughly recommend that you do read the whole thing—just don’t say we didn’t warn you about that sad ending. 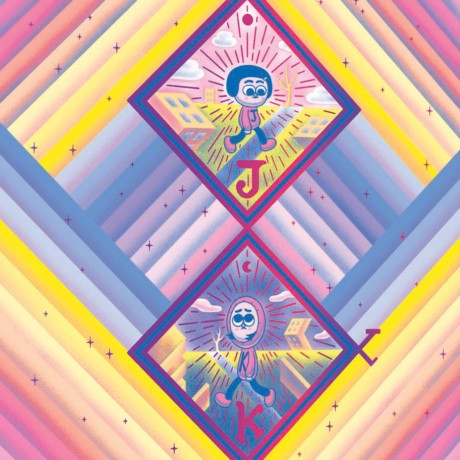