For the first iteration of the new Riga Biennial of Contemporary Art (RIBOCA) one thing is for certain: nothing has been done by halves. The event comprises nine different venues throughout the capital, featuring over one hundred artists (approximately seventy percent of which are from the Baltic region) and forty-nine new commissions. As if to prove a point, during the opening press conference held at the wonderfully named Splendid Palace cinema, curator Katerina Gregos invites every artist on stage in some kind of collective graduation ceremony.

The sheer magnitude of the programme is palpable as soon as you enter the Former Faculty of Biology at the University of Latvia. This vast neo-Renaissance building is the cornerstone venue from which everything else seems to orbit, and it houses work across all four floors. The selection process demonstrates an intelligent reading of the space’s science and technology legacy and great pains have been taken to embed works that correlate with the decrepit wood-panelled corridors, defunct equipment displays and abandoned laboratories.

An exemplary case is Stelios Faitakis’s allegorical wall paintings that adorn the entrance foyer. They are aesthetically similar to traditional Byzantine religious imagery and it takes a second to realise that these are not historical murals but are, in fact, entirely contemporary. They show scientists signing contracts with pharmaceutical companies and factory workers struggling in plumes of smoke. They’re both beautiful and full of condemnation.

The impact of human enterprise is also explored in Diana Lelonek’s Center of Living Things, something of a research display that shows the incredible hybrid ecosystems that have developed from non-degradable waste. Cases are filled with Styrofoam covered in moss, a motherboard filled with weeds and other household implements that have become home to flora and fauna. It is fascinating to see how resilient natural organisms can be, but it is yet another reminder of how deeply polluted our world has become.

“It is fascinating to see how resilient natural organisms can be, but it is yet another reminder of how deeply polluted our world has become”

Upstairs in a former working lab, Sissel Tolaas has installed Beyond Se(a)nse, a sensory experience that envelops you in the aromas of the nearby seaside in Jūrmala. It is one of two installations that encourage you to fully engage in the visceral act of smelling but is far more successful than its counterpart staged in Jurmala’s station. Here, the effervescent substances are held in old-fashioned beakers and test tubes, and the overwhelming smells (this is not an exercise in manufacturing fresh sea breezes) seem utterly at home among the old wooden benches and dusty cabinets.

The allure of old forgotten institutions is also celebrated in Mark Dion’s eerie installation A Tour of The Dark Museum. Armed with only a red flashlight, visitors are invited to roam what appears to be a forgotten gallery filled with animal skeletons and taxidermy, before arriving at a display of glowing green items that represent the natural sciences. It is a work that recalls the melancholic sensibility locked within the walls of this abandoned faculty building and strikes a chord with the childlike desire to encounter excitement and mystery.

The same wonder is called upon in Erik Kessel’s The Human Zoo, another intervention that involves the artist placing his collection of found photographs among displays in the university’s zoological collection. An image of a woman in a bath is shown alongside jars of pickled sea creatures, and a grimacing old woman with a canary perched on her glasses offers some comic relief to a display of forlorn stuffed birds. The artist claims that the site-specific piece is designed to make us see the “weirdness” of animal and human existence and question the way we categorize and catalogue natural species.

All of these works share a common interest in interrogating human behaviour within the natural world, celebrating or actively employing a scientific lens. Meanwhile, outside the venue itself, Michael Landy has constructed a satirical intervention with Open For Business—which is basically a Brexit booth. This re-appropriated Soviet-era kiosk has been transformed with a Union Jack paint job, a gigantic revolving sign and a booming British soundtrack and is filled with British exports such as Heinz baked beans, Fray Bentos pies and HP Sauce. The artist has also created his own merchandise, including broken-hearted EU fridge magnets and “Hard Brexit” condoms—when asked, Landy assured me that they were up to European health code. Whether or not the kiosk will have a profound effect on its European audience is uncertain, but at least one customer walked away with a box full of Weetabix.

“This re-appropriated Soviet-era kiosk has been transformed with a Union Jack paint job, a gigantic revolving sign and a booming British soundtrack”

After traipsing through this gargantuan exhibition, it seems almost impossible that there is even more to see, but every succeeding venue brings with it the promise of a distinct architectural character. The former apartment of Kristaps Morbergs on the nearby Freedom Square features several artists who engage with the notion of the home and political upheaval, including Eve Kiiler and Henrike Naumann. Once again, the venue itself is an important player, and the stained-glass windows, which show resplendent ladies bathing, and archaic traditional fireplaces demand as much attention as the art on show.

The far more utilitarian set-up at Andrejsala (an industrial port area) focuses on Riga’s history as a trading post and the connection with (and occupation by) the Soviet Union. A reclaimed boat forms the prominent exhibition space, but the real gems are found in the vicinity of a (badly signposted) warehouse. On the approach, a sinister livestock trailer appears abandoned, until you hear a booming and crashing from within. Is someone trapped? Are we in danger? Is this the beginning of the zombie apocalypse? In fact, it’s a sound installation by Estonian artist Jevgeni Zolotko, known for his ability to ignite an emotional response through simple cues that evoke a collective fear of an impending doomsday.

Another Armageddon seems feasible in Alex Destoop’s documentary film Phantom Sun. The piece presents parallel narratives that tell of abandoned industrial sites and even whole villages along the Norwegian-Russian border. Heavy snowfall envelops buildings that never technically existed, and mounds of discarded gas masks tell of forgotten fears of mass poisoning. It marries together the bitter reality of conflict and commerce, as present-day container ships roll into harbours, before the narrative switches to old battlefields.

The film is enthralling, and the chill of the Norwegian winter seems more real than the baking sun outside. This immersion is as much a testament to the film as it is to the incredibly attentive installation process (the exceptional sound and epic proportions of the screen truly envelop you), which is of an impressively high standard throughout the biennial.

“Is someone trapped? Are we in danger? Is this the beginning of the zombie apocalypse? In fact, it’s a sound installation by Estonian artist Jevgeni Zolotko”

The realms of possibility are pushed to their limits in Marco Montiel-Soto’s complete recreation of a stilt house traditionally found in the villages of Lake Maracaibo in Venezuela (the artist’s home country), which is hidden in another hard-to-reach warehouse on the other side of town. Montiel-Soto travelled to the area known as El Congo and recorded the inhabitants’ daily life, learning about local customs, mythology, the effect of crude oil extraction and the ensuing ecological issues. The result is an epic installation featuring a purpose-built lake, complete with a rickety bridge leading to the small dwelling, where you can sit and take in a three-screen video that plays his footage.

The routine of life on the water is mesmerizing, as dog, pigs and chickens jostle alongside children racing towards their makeshift boats, and village elders remember snippets of traditional songs. On leaving, it seems impossible to believe that you are actually on the other side of the world, such is the immersive effect. It’s an exceptional feat that exemplifies the ambitions of this biennial, which manages to weave common threads without seeming heavy-handed, with a deliberate focus on immersive film and installation. Although I fear some of the disparate locations might be too hard to find, the search makes their discovery all the more rewarding. 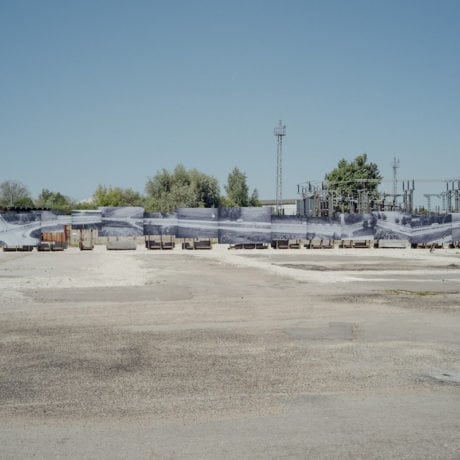