Two spindly bronze bunny ears weave their way around a blush-pink space rock, while a lavender martian head looms over an onyx black bed. Next door, a polished bulbous bum clenches a pastel funnel between its cheeks, and a cup with a long nose collects snot. None of these scenarios is literal, of course, but any of them might come to mind when looking at the trippy and sumptuous ceramics of Californian artist Ron Nagle.

I say artist, as Nagle’s work transcends sculpture: in addition to his cheeky clay creations, Nagle has also made waves as a singer-songwriter. Born in San Francisco in 1939, Nagle studied English Literature at San Francisco’s Community College, before switching into the school’s Fine Art department to explore ceramics. He’d elope often to Los Angeles to see the work of Ken Price and Billy Al Bengston, whose expressive use of colour and form inspired his work. During this time, Nagle contributed, however unconsciously, to the midcentury California Clay movement—a collective effort to get ceramics on the map, led by Peter Voulkos, a mentor to Nagle.

In the sixties and seventies, Nagle helped shape the San Francisco Sound music scene. He went on to teach at Mills College in Oakland, California for thirty years (retiring a decade ago), but continued to pursue his passions of throwing clay and making music. Nagle’s 1970 album, Bad Rice, is a psychedelic swagger through west coast rock that sounds something like his clay creations, I imagine, if only they could talk.

A strong love of wordplay defines Nagle’s practice. Framing each microcosmic sculpture is an esoteric title that is both befuddling and sharp as knives in its ability to conjure all sorts of imagery from the rich, sultry ceramics. Bulbous curves, oil-slick automobile paint, and an ombre starburst colour palette typify his works made from cast polyurethane, clay, car paint and metals including bronze and gold. Simultaneously futuristic and postmodern, each miniature world—they are all tiny, small enough to fit in the palm of your hand—distorts its own scale, winking at you with a multi-stylistic irreverence that makes dating and contextualizing always just slightly out of reach.

“Simultaneously futuristic and postmodern, each miniature world distorts its own scale, winking at you with a multi-stylistic irreverence”

“We were working with brighter colours and earthenware glazes, which was initially frowned upon by both traditional potters and the mainstream art scene,” says Nagle, who recalls the California Clay Movement as a more diffuse and casual affair at the time. Citing Giorgio Morandi and Philip Guston as major influences—two twentieth century painters with wildly different styles, from the blurred still-lifes of the Italian loved by John Berger to the explosive, pink-tinged tableaux of the American—Nagle is quick to bring other, non-art references to the table. “Food plating, things I photograph on the street, fashion magazines, Japanese visual culture… termite mounds, Hawaiian gravesites, early automobile aesthetics, especially my own 1948 Ford Coupe…”—the list goes on and on for Nagle, who seems to soak up inspiration from anywhere he looks.

More than anything else, Nagle’s sculptures are about mood. The fiery starburst hues and kitschy joy of macaroni cheese yellow; the sharp dictator’s spears and voluptuous protagonists; their sandy airbrushed texture and sinister oozing liquid: each work has a visceral sensual impact, often achieved by bringing together contrasting elements into a disorienting melting-pot of feeling. Unlikely colour combinations sear into your skull, creating a sense of uneasy ecstasy. Put simply, Nagle’s ceramics take everything you thought you knew about feelings and turns it inside out. They instil a childlike wonder that’s soaked in magic. And just when you think you’ve finally cracked its code, each work pushes you back into that black abyss of unknowing with its mystical title.

“I used to resist titling my work because, when I saw it on a gallery wall, it always seemed to me quasi-poetic or pretentious. It took me out of the work,” explains Nagle. But the artist’s instincts as a songwriter eventually won over. “I believe puns are the highest form of humour,” asserts Nagle, and one look at the list of works currently on show at Midnight Stroll, Nagle’s solo exhibition at The Perimeter in London, proves him to be a master of the naming game.

Humour plays a big part, but the title can also provoke a darker take on what seems at first glance to be a cheery piece. For instance: in Donkey No Show (2016), a cute pastel-pink blob stands in front of an oil slick black screen, its pudgy reflection staring back. Has the amorphous creature been ghosted, left wallowing in the loneliness of his own reflection? Then there’s Ms. Artismal (2018)—a nocturnal desert scene of ombré ceramic, plum-hued acrylic, and catalysed polyurethane—the meaning doesn’t yield easy, but googling “artismal” reveals it to be a portmanteau of artisanal and abysmal, “an adjective describing authentic handicrafts of terrible quality”. Is a single lady ostracized for her janky wares now on the run in this dark bruise of a desert?

“At a time where artists seek increased control over a single ‘correct’ interpretation of their work, Nagle’s loose attitude is a breath of fresh air”

There are also more positive parallels. Teeter Tartar (2000) is a brute with a badass first impression—the chunky cylinder-shaped body is made from blush-hued clay with the texture of volcanic ash, a cherry red base and an ominous black spike that sticks straight up from its front—but the title suggests the autocrat is less stable than he may seem. The titles are always slightly unhinged from the mood of the work at hand, as if standing two steps away, letting a multiplicity of meanings breed in the sticky in-between. “In almost all cases there is never a direct correlation to the content,” admits Nagle. “It’s a means of adding extra curiosity into the mix, to throw the viewer off so their imagination can take over.”

At a time where artists seek increased control over a single “correct” interpretation of their work, Nagle’s loose attitude is a breath of fresh air. For the better half of a century, Nagle has been crafting his weird worlds without a care for passing trends; and now, as the art world has developed a fanaticism for characterful, colourful ceramics, the market has clocked in to the value of his work. But despite having pieces in the collections of institutions from LACMA to The Met, exhibiting at the 2013 Venice Biennale, and experiencing increased attention from collectors aside a flurry of solo shows this year from New York to Vienna—Nagle maintains a healthy distance from that world. He prefers to keep a low profile, drawing and sculpting in his tranquil California studio—and he needn’t be anywhere else. His boisterous, transcendental ceramics speak for themselves. 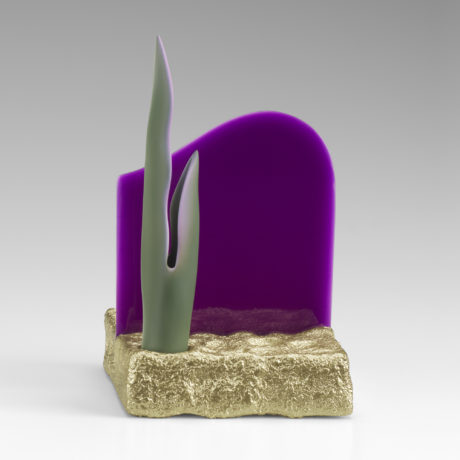