Out today on Artsy is Jennifer Brough on Ana Mendieta’s Silueta series.

Growing up, I spent summer weekends on the beach by my family’s house. My parents read and dozed while I foraged among the pebbles and seaweeds replenished daily by the tide. One day, I found a stone shaped like a telephone. “Ring ring,” I sang, holding it to my cheek. I took the precious item home, and placed it by a window overlooking the ocean.

“As a child I played on the beach, my hands and feet blackened by oil.” This reminiscence, by the Chilean artist, poet and activist Cecilia Vicuña, differentiates the sands of Jersey, where I grew up, from the shores of her childhood. The beaches of the Channel Islands, an affluent cluster of islands near the Norman coast, are clean and quiet. Concón, where the Aconcagua River meets the Pacific Ocean, is polluted by an oil refinery sited on an ancestral cemetery.

The line features in About to Happen, an artist’s book that accompanied Vicuña’s 2017 retrospective, which was first staged at Contemporary Arts Center, New Orleans and travelled to a string of other venues. The book is a lament and a love letter to the sea. It encapsulates Vicuña’s unorthodox approach to artmaking, in which hummed fragments and resituated objects are entangled within a capacious eco-poetics.

Vicuña was born in Santiago de Chile in 1948. In 1972, she moved to London for a residency, becoming exiled when Augusto Pinochet assumed power in her home country. She later relocated to New York. She first made art in 1966, aged seventeen, when she produced a spiral of beach debris that was washed away by the tide. Her artistic consciousness developed in dialogue with the ocean, and water has pulsed through her work ever since.

Vicuña has made los precarios, as her small, epiphanic bundles of found materials are known, throughout her career. In a fragment titled “The Precarios”, she describes their richly relational genesis: “An object is not an object; it is a witness to a relationship.” Often clasped together by twine, Vicuña’s early precarios were designed to be dispersed by wind or waves.

“Vicuña’s use of discarded materials speaks not just to a logic of recycling, but to a methodological insistence on working ‘from below’”

The artworks, which have since frequently been displayed in galleries, evoke what the anthropologist Deborah A. Thomas terms “witnessing 2.0,” a practice of embodied looking that “recognizes the various ways we are implicated in the processes we address,” and consequently “destabilizes the boundaries between self and other, knowing and feeling, complicity and accountability.” The precarios are an open-ended archive of affect that trouble distinctions between what is felt and what is observed.

A few years ago, I worked at a non-profit contemporary art institution in downtown Manhattan. While researching Vicuña’s 1997 exhibition at Art in General, which had for many years been located a block from my office, I learned that the artist combed the surrounding streets each day for detritus to construct a series of precarios, which she installed on a shelf referred to as a “Poet’s Table”.

In 2016, when preparing for About to Happen, she produced an arrangement of basuritas, as the “thrown away” assemblages are also known, on Collister Street, a stone’s throw west. The ephemerality of these artworks subverts the logics of primitive accumulation that are disassembling lived environments worldwide. Vicuña’s use of discarded materials speaks not just to a poetics of recycling, but to a methodological insistence on working “from below.”

I recently spent time, extended by the pandemic, back home in Jersey, after over a decade living elsewhere. I re-grounded myself in the landscape, and gave attention to my mental health after my experiences in the precarious and individualising cultural sector. When I could, I combed the beach.

Each day, Jersey’s tides wash up mounds of vraic, seaweeds dredged from the ravines of the Atlantic that are harvested as manure. I felt the touch of my smallholding Jèrriais ancestors, who replenished their soils with vraic, as I sifted through these rubbery herbs. As I did so, I contemplated the differences between holding and looking. I came to understand Vicuna’s precarios as acts of holding, staged in liminal and in-between spaces, that challenge the visuality of power.

The wind would often carry salt onto my tongue, destabilising my sense of separateness from the ocean. Researching the area, I learned that, one night in 1356, a coastal house and its woodland was engulfed by the sea. Locals would lure boats onto nearby rocks, as shipwrecked cargo would become property of their parish. They then witnessed oak become reef and fields become dunes, and, superstitious, they changed their ways.

“I came to understand Vicuna’s precarios as acts of holding, staged in liminal and in-between spaces”

Throughout the winter, storms sent waves heaving over the seawall. I watched, conscious of how much has been stolen through misuse of the ocean.

In “Floating Between Past and Future: The Indigenization of Environmental Politics,” her appraisal of the climatic resonances of Vicuña’s practice, the feminist art critic Lucy R. Lippard reproduces a poem that Vicuña wrote at Lake Titicaca in 1989:

The Inca is about to be

and the ruins of the past

are the model for the future

being created by our

The archaeological traces of classical ruins were foundational to the discipline of psychoanalysis. Postcolonial theorist Ranjana Khanna has observed that “Freud was a great collector of ancient artifacts, from which he drew inspiration for his idea of the unconscious as something buried beneath layers of repression.”

Vicuña reaches for less monumental forms: the discarded things that accumulate in cities and on beaches, and the threads that hold these together. As analytic theory excavates what has been buried, so the precarios commune with what is resurfaced by the tide. Addressing the contested currents of cultural erasure and oceanic drift, Vicuña’s sculptures pay tribute to an important site of ecological and artistic gathering: the wrack line.

Head to Artsy to read their latest story in the series, a piece on Ana Mendieta’s Silueta series 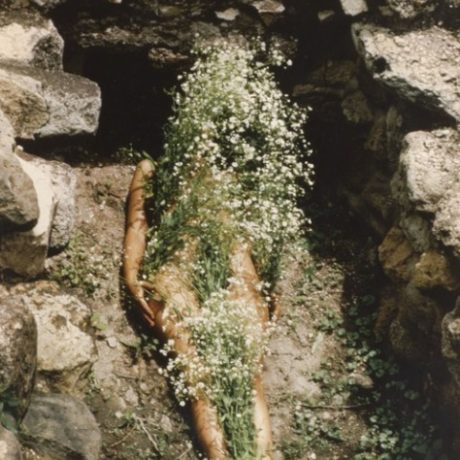