“The cat’s cutesiness morphs into something more malevolent as it watches, CCTV-like from the ceiling”

Artist duo Eva and Franco Mattes have made real these celestial characteristics in their taxidermy translation of the feline overseer, who surveys visitors to their current show, Dear Imaginary Audience, at Fotomuseum Winterthur in Switzerland. Here the cat’s cutesiness morphs into something more malevolent as it watches, CCTV-like from the ceiling, signifying the power the internet holds over our lives.

The cat’s venture into the physical realm (and back again: a high-res image of the sculpture is downloadable on Wikipedia), highlights the disquieting fact that each of us is accompanied by our own digital doubles, knowingly or unknowingly assembled from harvested internet data.

According to the LOLcat Bible, Ceiling Cat’s alter-ego is the devilish Basement Cat, who tempts mere mortals into sin. While philosopher Jeremy Bentham’s panopticon theory posited that people’s behaviour is modified when they know they are being watched, perhaps the internet has upended this logic. For, with the disabling of a cookie or pull of a plug, we can pretend we are free from the shadows of surveillance. As one meme-creator responds: *masturbates anyway*.

At Fotomuseum Winterthur until 24 May 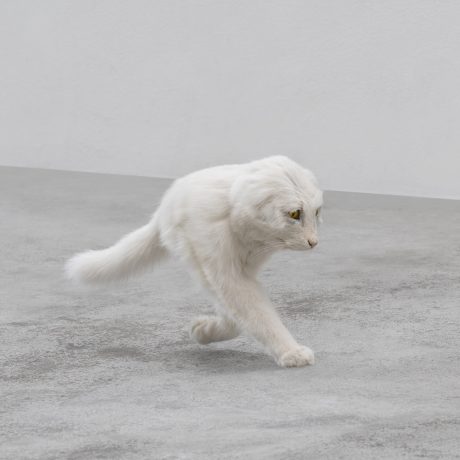