The paintings of Claire Tabouret exist in the hinterland between corporeality and ethereality, one foot in earthly reality and the other in reverie. Rendered in expressive plashes of colour, often placed atop lustrous layers of underpainting that can make them appear lit from within, her figures are simultaneously recognisable and disquieting, as if drawn from a memory you’re unsure you’ve actually experienced. Many of them stare out of the canvas, as if sizing up their beholder.

The figures in If Only the Sea Could Sleep—Tabouret’s new exhibition of paintings, monoprints and sculpture at HAB Galerie in Nantes—are more interested in each other. Named for a collection by the Syrian poet (and perennial Nobel Prize contender) Adonis that uses maritime imagery as a metaphor for the changing tides of romantic attachments, Tabouret’s new suite of works depict couples at different junctures in their relationships, all ensconced in a seaside landscape.

The majority are nude, with the occasional flash of swimwear. This is another departure: much of Tabouret’s prior work paid especial attention to garments. The large-scale painting The Red Carnival (2015) showed a crowd of children dressed variously as commedia dell’arte clowns and characters from fairy tale, expectantly gazing out of the canvas in a moment of arrested innocence. Another, Les Debutantes (2015), sees eight young women posed in gowns, each formed from from strips of actual fabric stuck to the canvas. “I’ve worked a lot with clothes,” she says, “with what you wear, how they attach to people. But I think here I’m trying not to give too much away. It’s more of a mental space, a dream space. Clothes would give too much of an indication of time and place.”

“I’m trying not to give too much away. It’s more of a mental space, a dream space”

The new works at Nantes indeed give little away. Sometimes we see a woman and a man, sometimes two women. Some stride, hand-in-hand and eye-to-eye, across a beach, while others wade without touching into the waters. Pieces that appear to convey the same scene subtly diverge. In one, with a yellow couple against a raging red sky, a woman holds a man while walking slightly behind him, suggesting an unequal attachment and powerful relationship; in another piece showing a similarly positioned couple, both place their arms around each other’s shoulders. Circling round these figures it is tempting to form a narrative progression in and out of love, but Tabouret’s fragmentary images arrest a simple A-to-B story.

Another pair, printed in a pale ceramic blue against an aubergine night sky, are locked in a tug that could be either affectionate dance or a bullying tussle. Several pictures see one figure clamp another to the ground. “I find it invigorates,” explains Tabouret, “being between sexuality and violence, between who is dominating who. And it’s not always simple.” A plaster sculpture in the gallery’s atrium sees another such duo butting heads and grasping arms, their legs tilting backwards in a sort of wrestling posture. Is this a scene of tension, tenderness, or a mélange of the two?

“I find it invigorates, being between sexuality and violence, between who is dominating who”

The sculpture was previously featured in I Am Crying Because You Are Not Crying, Tabouret’s 2018 exhibition at the Château de Boisgeloup, Picasso’s country residence outside Paris. And Tabouret’s work shares with that of her modernist predecessor a psychological charge embodied with form and colour, and an interest in folding histories and mythologies into the image. But while the Spanish artist (often viciously) tracked the waxing and waning phases of his own affairs, Tabouret recedes from view, instead presenting us with a series of universalized bodies on which we can project our own experience.

If Only the Sea Could Sleep is the latest in a series of summer shows at HAB Galerie, held as part of Le Voyage à Nantes, an annual festival of public art. Tabouret is the first painter invited to exhibit in the space, a gargantuan concrete warehouse on an island in the Loire, formerly used to store bananas. Tabouret’s initial visit to the venue shaped the art she created for the show. “The space was empty,” she recounts, “and my first impression was about how I could embrace this monumental space without going against it. I didn’t want to break the space, I didn’t want to make fake walls.”

Her solution was to turn to the site’s nautical history, creating paintings not on wall-mounted canvases but on sails, hung from the gallery’s ceilings by ropes; early experiments for the show used oil, gasoline and varnish instead of paint, all substances used on boats. A looping sound piece, by Tabouret’s friends Aska Matsumiya and Alex Somers, combines the sounds of waves and creaking boats with cellos and harps. “I feel we can imagine,” says Tabouret, “that there’s an ocean, that there’s this big ocean beyond the walls.”

Recently, the ocean has some to occupy Tabouret’s own imagination. Born in Provence, raised in Montpelier and educated in Paris, she has lived for the past four-and-a-half years in Los Angeles, a city whose own sun-drenched, Pacific-facing luminosity seems to seep through her works. “When I arrived in Nantes,” Tabouret recalls, “it struck me how, like LA, it turns its back to the world and faces the ocean.” The idea of using sails came from her explorations of San Pedro, the Californian metropolis’ port district. “It’s magical,” she says, “there are really no humans, just machines working.”

These sail paintings, seven in all, each display differently on either side, so that when you loop back around the gallery they are encountered anew. When sunlight pours through from the gallery’s skylights they become diaphanous, and elements of both images begin to meld together. “They’re very light,” says Tabouret, “you could roll them up and put them in a suitcase.” Each retains evidence of their previous life, stitched with numbers, badges and (in one case) a tiny transparent window.

On the surrounding walls Tabouret has placed fifteen monoprints, a form of print whose mould can only be used once. “I fell in love with monoprints a few years ago,” she explains, “and they’ve become part of my process in the studio. It’s where I find ideas of characters and postures.” Tabouret uses her wet prints to print further pieces, creating a spectral chain where each link carries the ghost of that which came before. “I really go into a flow,” she continues, “I think it’s close to musical improvisation.” The colouration of the final prints emerges from this process, adding an element of unpredictability to the outcome.

Interspersed among the couples in Tabouret’s dream realm are two outliers: a print depicting a boat and another showing a house reflected in water, which call back to her 2011 series Maison Inondée (‘Flooded Houses’). “I like the idea of having a tiny glimpse of landscape in the show,” Tabouret explains, “to set up the stage for tragedy.” This expectancy that something unpleasant could all-too-easily happen, is not new in Tabouret’s arc: a set of 2011 paintings showed migrants crossing a wine-dark sea, their fate indeterminate. In Nantes, she transfers this ambiguity to intimate, less cataclysmic instances. The seaside may provide romantic joy and erotic playfulness, but Tabouret leaves a question mark as to how long these moments might last.

Claire Tabouret, If Only The Sea Could Sleep 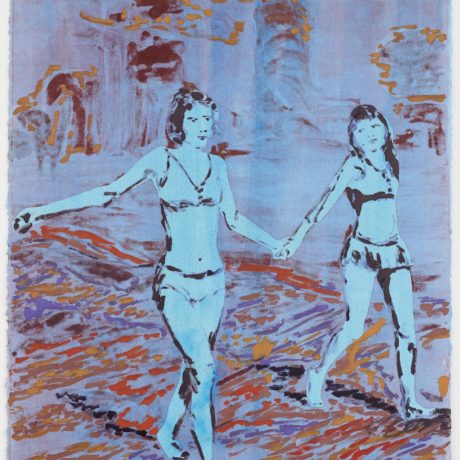