For one week each December, a global cohort of collectors, gallerists, VIPs and influencers descends upon the sandy shores of sun-kissed Miami Beach for a debauched week of buying, selling, and imbibing in the name of art. Here, jet-setting celebrity curators donning French-style blue blazers swivel their martini glasses and throw back negronis beneath light-strapped palms, all while chairing panel discussions on the crisis of sustainability or the power of political art.

But as 2019 hits its final hour, it’s proving a rebellious end to a decade driven by profit and excess: from Greta Thunberg and Extinction Rebellion, to the Turner Prize winners subverting the competitive logic of the prize in the name of collective success. But is the art world’s most hedonistic affair any more enlightened this time around, or does it remain entrenched in the annual display of glitz and glamour? Pervasive high-life denial and diamanté decadence prove that cheap thrills are still the name of the game in the pastel-soaked wonderland of Miami Beach, with seven artists taking very different approaches to the art world’s most escapist escapade.

Order of Importance by Leandro Erlich

It wouldn’t be Art Basel without a monumental (and monumentally Instagrammable) piece of public art, and there is perhaps no greater symbol of Miami than a road rage-encrusted sandy beach (except, perhaps, a leopard print jock strap). Argentine artist Leandro Erlich has whisked up a six-lane traffic jam on South Beach for this year’s edition of the fair, complete with sixty-six life-size sand-coated sunken cars that appear to be in the process of being slowly reclaimed by the sea. For a city that’s projected to be underwater in as little as forty years’ time, it’s a fitting installation that will inevitably be washed away by the rising tide. 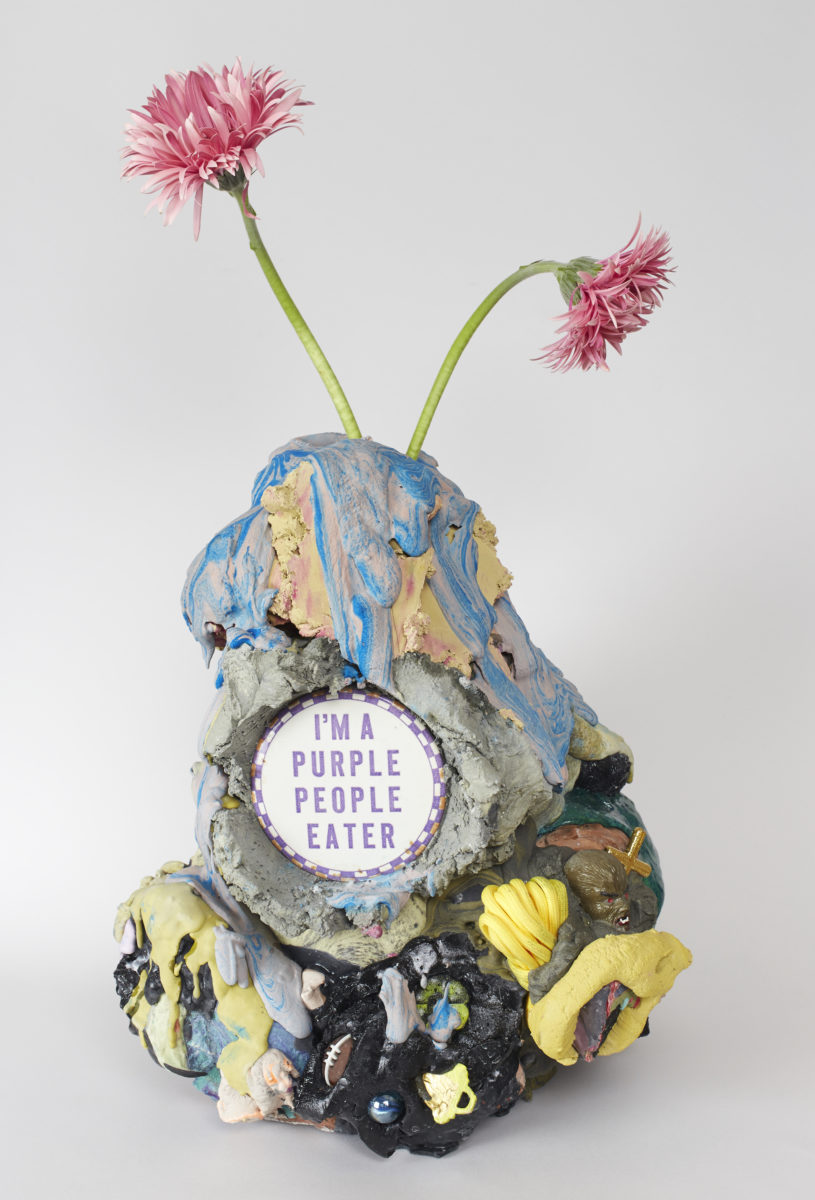 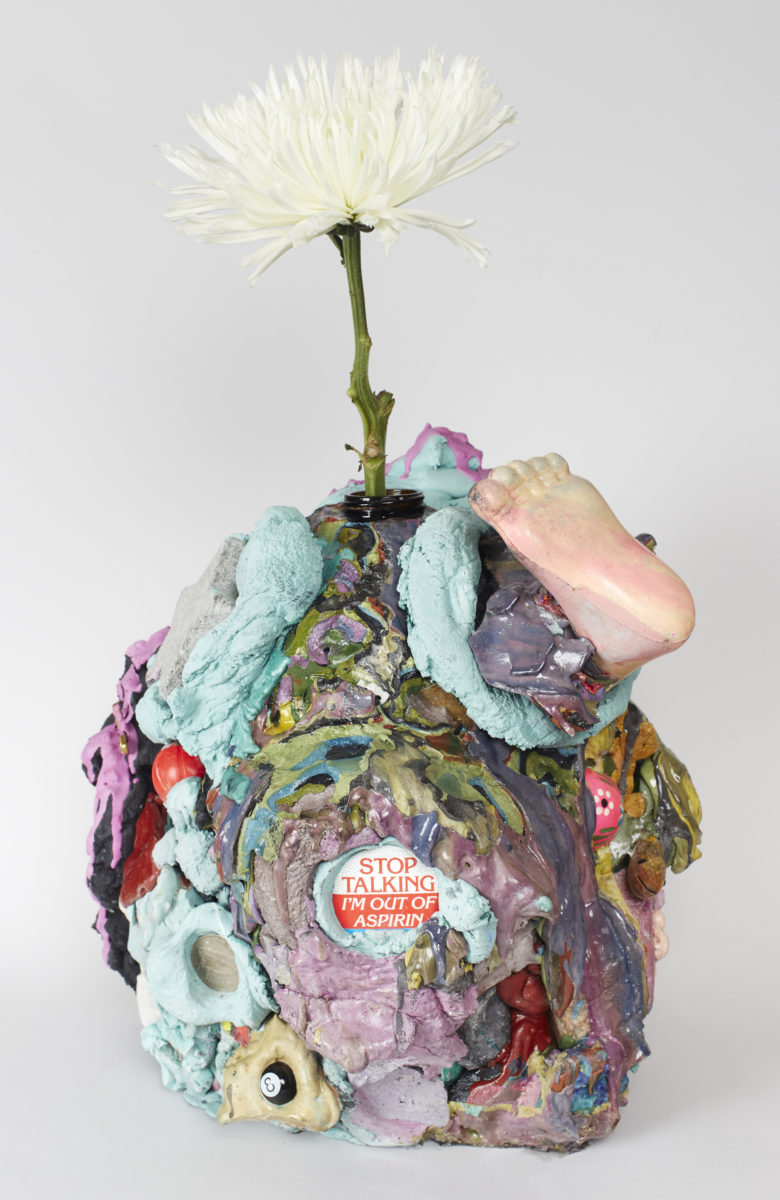 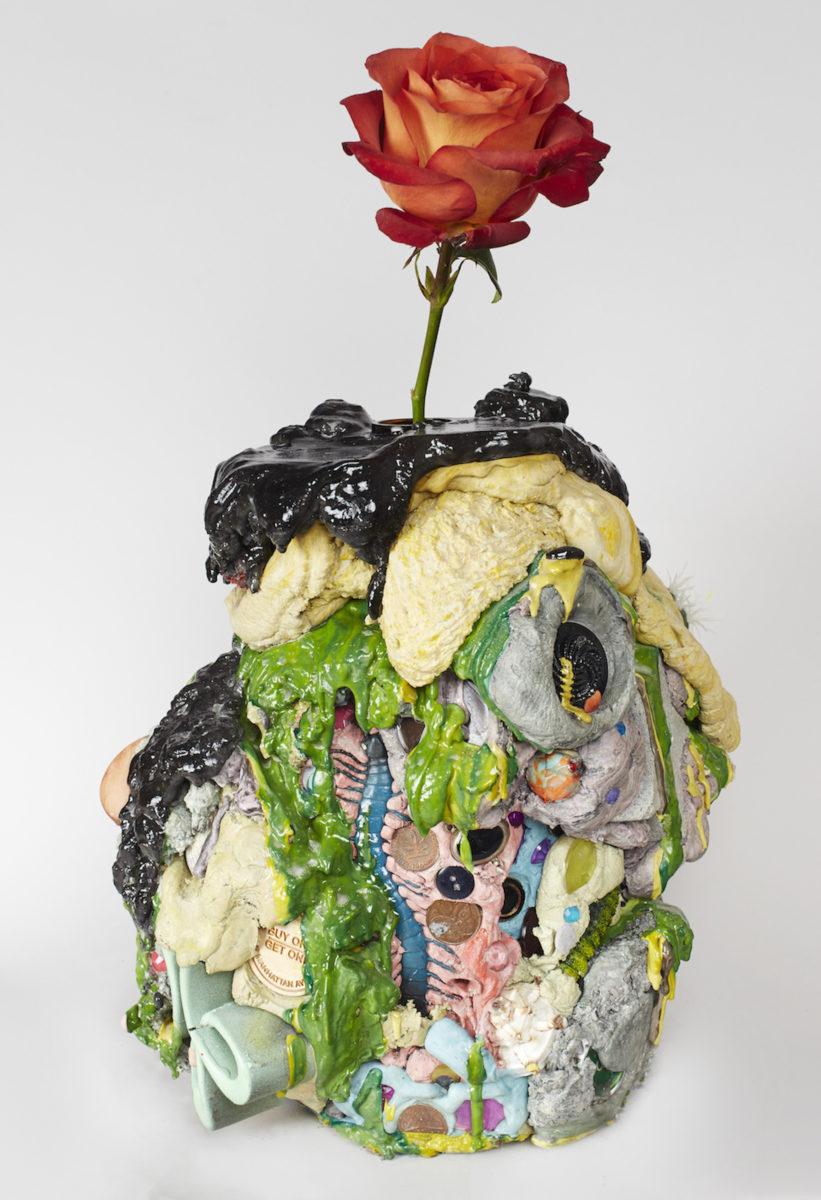 A gold American Express card, car keys, Wolf Man doll and an enamel crucifix poke out from the oozing slime-coated sculptures of Vincent Dermody, presented with Selenas Mountain at the New Art Dealers Alliance (NADA) parallel fair back on the mainland. Like little alien critters, these three compact sculptures are comprised of a beer growler and concrete core, which over the years has been heaped with layers of aggregate matter including nostalgia-crooning memorabilia and more glitzy symbols of luxury. Protruding from each shrine of junk is a triumphant thrust of real flora—the monsters become quasi-functional vases. Reminiscent of the death rattle of an agave plant—the striking flower shoots out of the tropical flora shortly before it dies—I can’t help reading Dermody’s psychedelic sculptures as a premonition of what’s to come.

The provocative pink-hued, gemstone-lined booth of Company Gallery quickly slips into something more ritualistic as one steps inside the installation by Raúl de Nieves and Cajsa von Ziepel. Collaging mystical and sci-fi aesthetics with diamanté-encrusted dollar store bling, the otherworldly characters romping through Nieves’ and Ziepel’s presentation are queer futurist polybots for the new decade. Le champs elysees (2019), one of two “artist shoes” by Nieves, is a technicolor conglomeration of fibreglass, beads, glue, costume jewellery, a psychedelic light box and acetate tape. Like a pair of rocker boots colonized by gemstones growing in wild neon abandon, this work—and the rest of the twisting, posing, twinkling productions in this sultry emporium – seem to suggest the way out of this hot mess of our burning planet is better bling, and more of it. 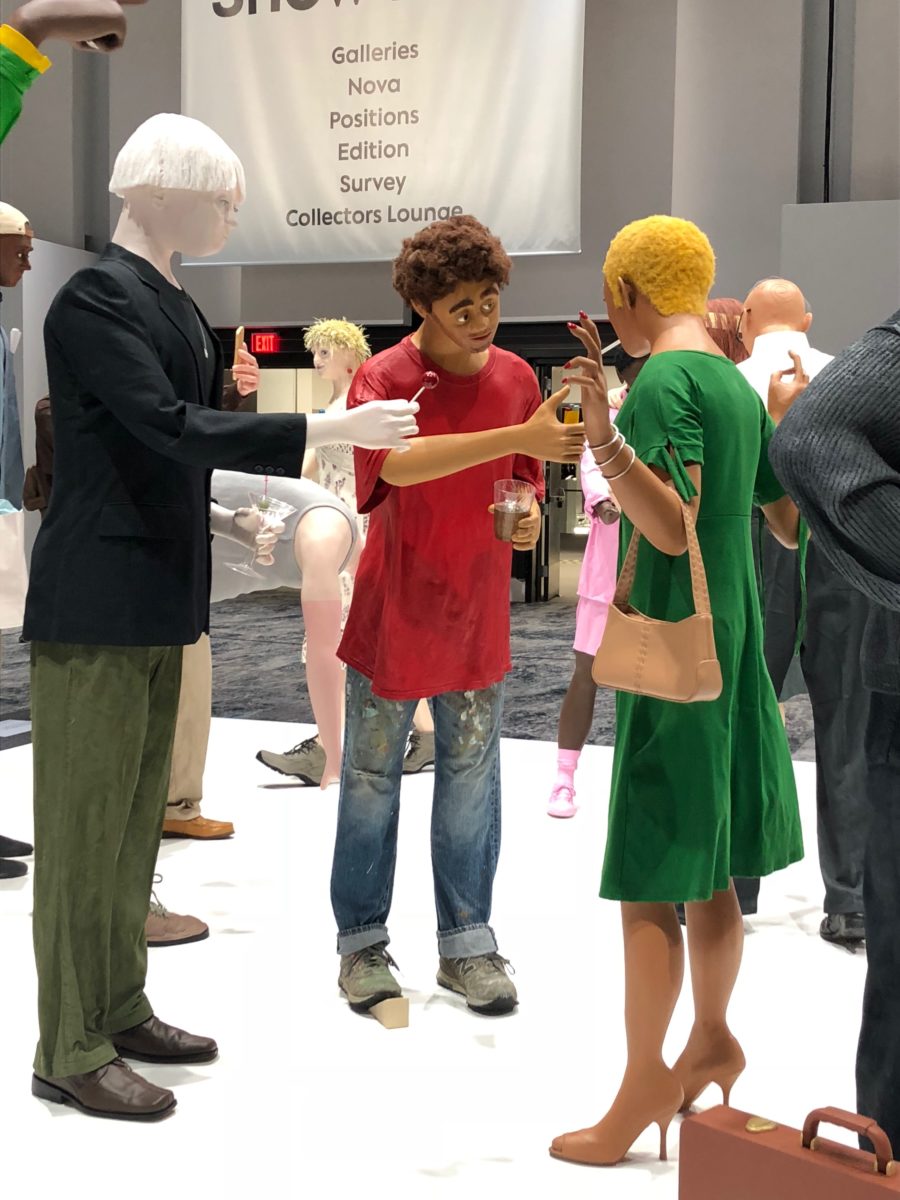 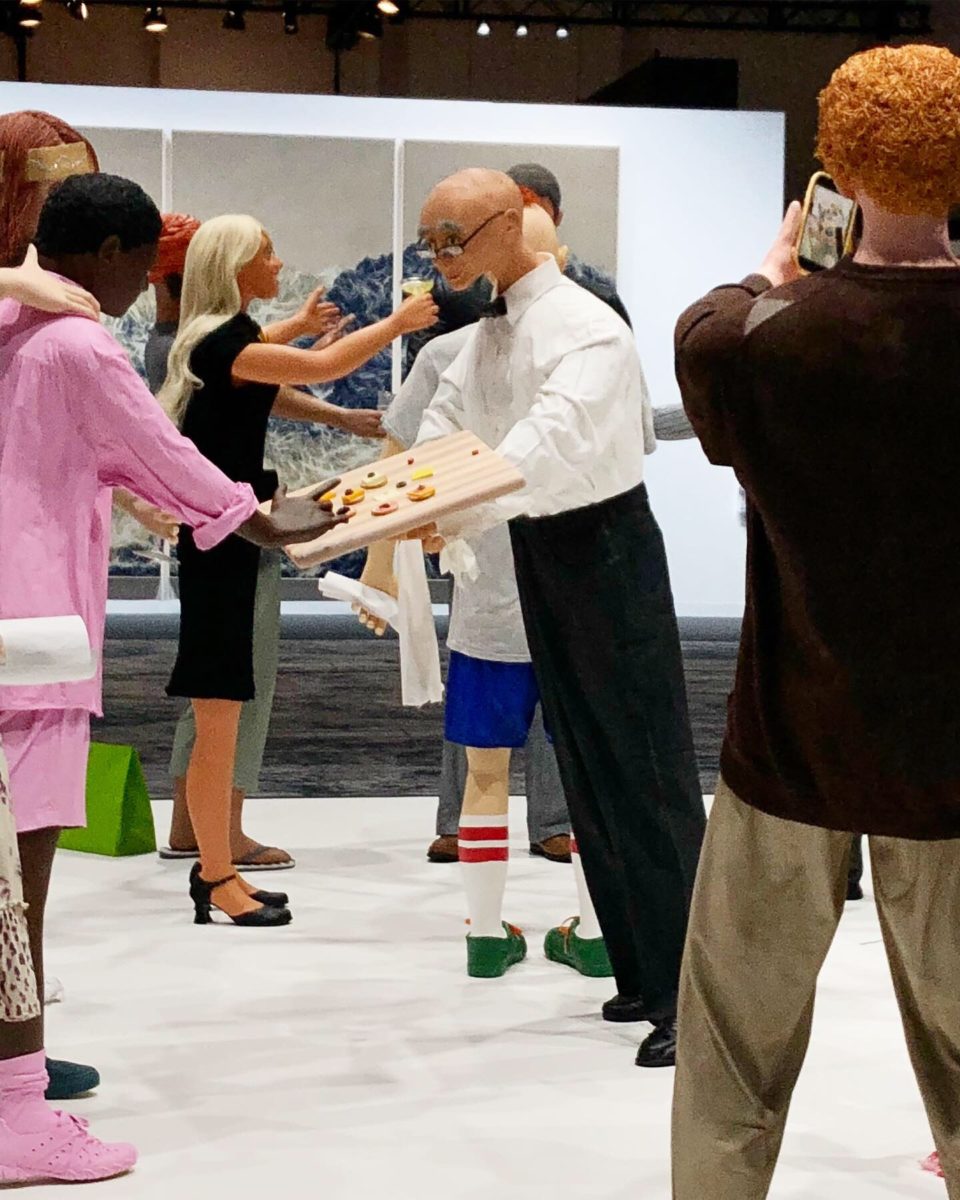 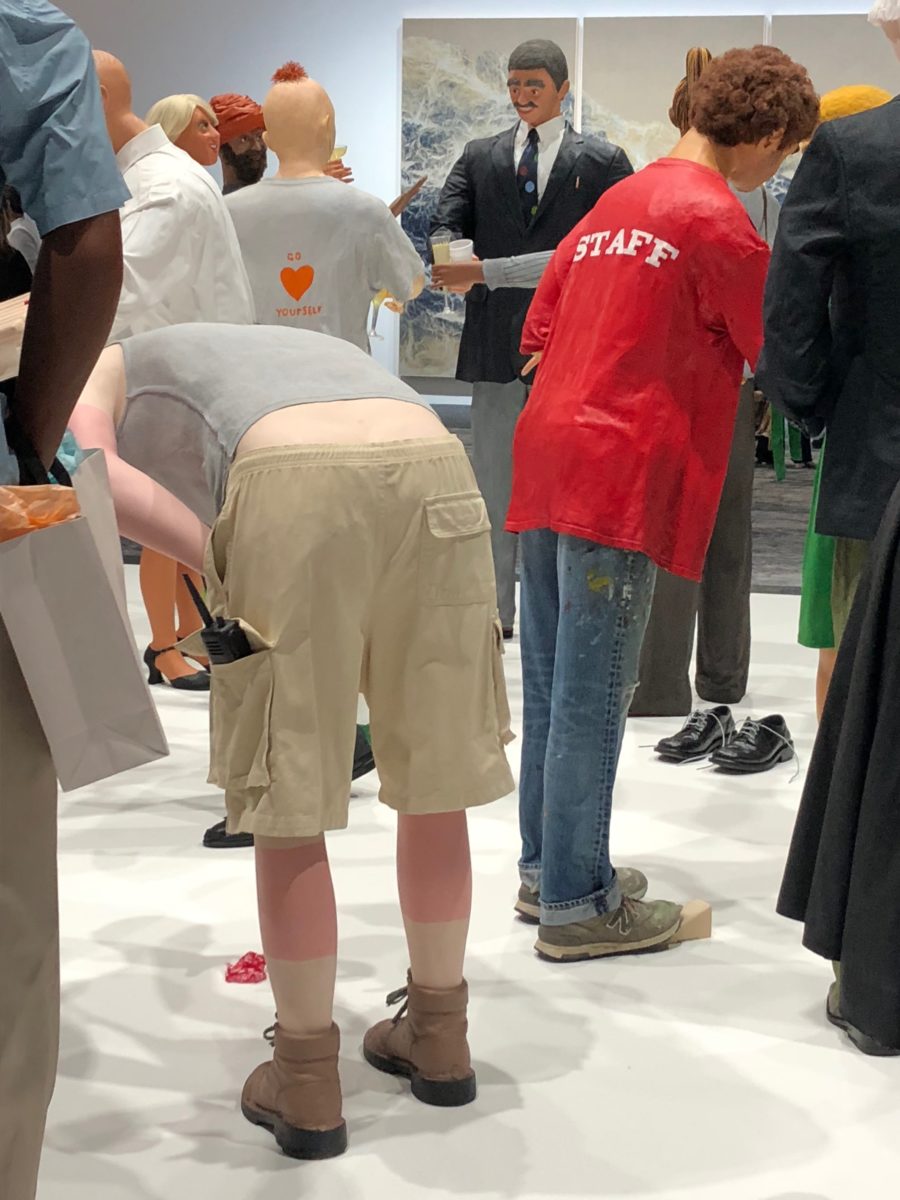 An acid-blond dealer clutching a martini offers a lollipop to a fashionable collector in stilettos, while an art handler in paint-smeared jeans stoops to offer her a light. Across the platform, spilling over with twenty-six life-size party guests, a suave gallerist in a black turtleneck attempts to snag an up-and -oming young sculptor, while a badly sunburned security officer bends down to pick up the vagabond candy wrapper. Tom Friedman’s Cocktail Party (2015), installed in the fair’s new “Meridians” sector, is a cutting and witty metaphor for the wealth gaps and power structures that dominate the art world, not least in Miami Beach. There is no shortage of irony that this Bosch-like tableau of contemporary art’s true colours finally sold this year for a cool $250,000.

New York-based sculptor Katie Ryan has made a recent wave in the art world for her acclaimed “bad fruit” tableaux. Using semi-precious stones, glass, pearl and bone sourced everywhere from vintage stores to Craigslist, Ryan produces sculptural still-lifes of rotten fruit wherein the value of the mould-infested vessel increases with its state of degradation. The art historical narrative of the still life: a temporary display of opulence trending to rot—a tragicomic nature of the flashy still life as a bombastic display of wealth—finds its truest form in Ryan’s monumental work. Propped up on a rusted trailer is a truckload of new characters including peaches, cherries and a bunch of grapes alongside the citrusy mainstays (as well as some fruit that’s too far gone to tell); the fetid and the rotten blend with the seductive and opulent to create a delectable monster of contemporary excess. With three potential buyers lined up (including one institution), each willing to pay $350,000 for the junkyard cornucopia, it’s a metaphor that’s poised to sell well in a mood that hints at the end-of-days. 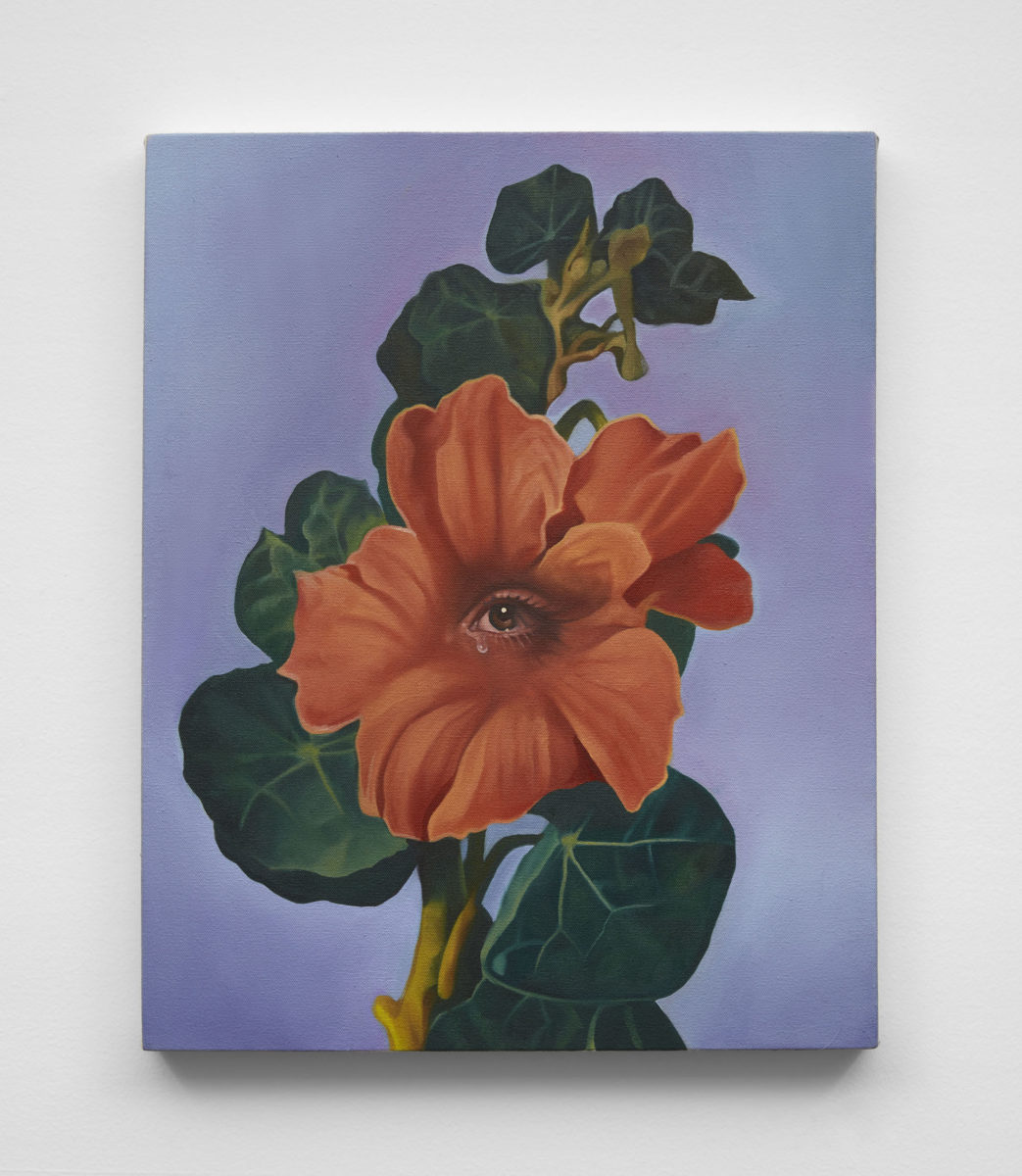 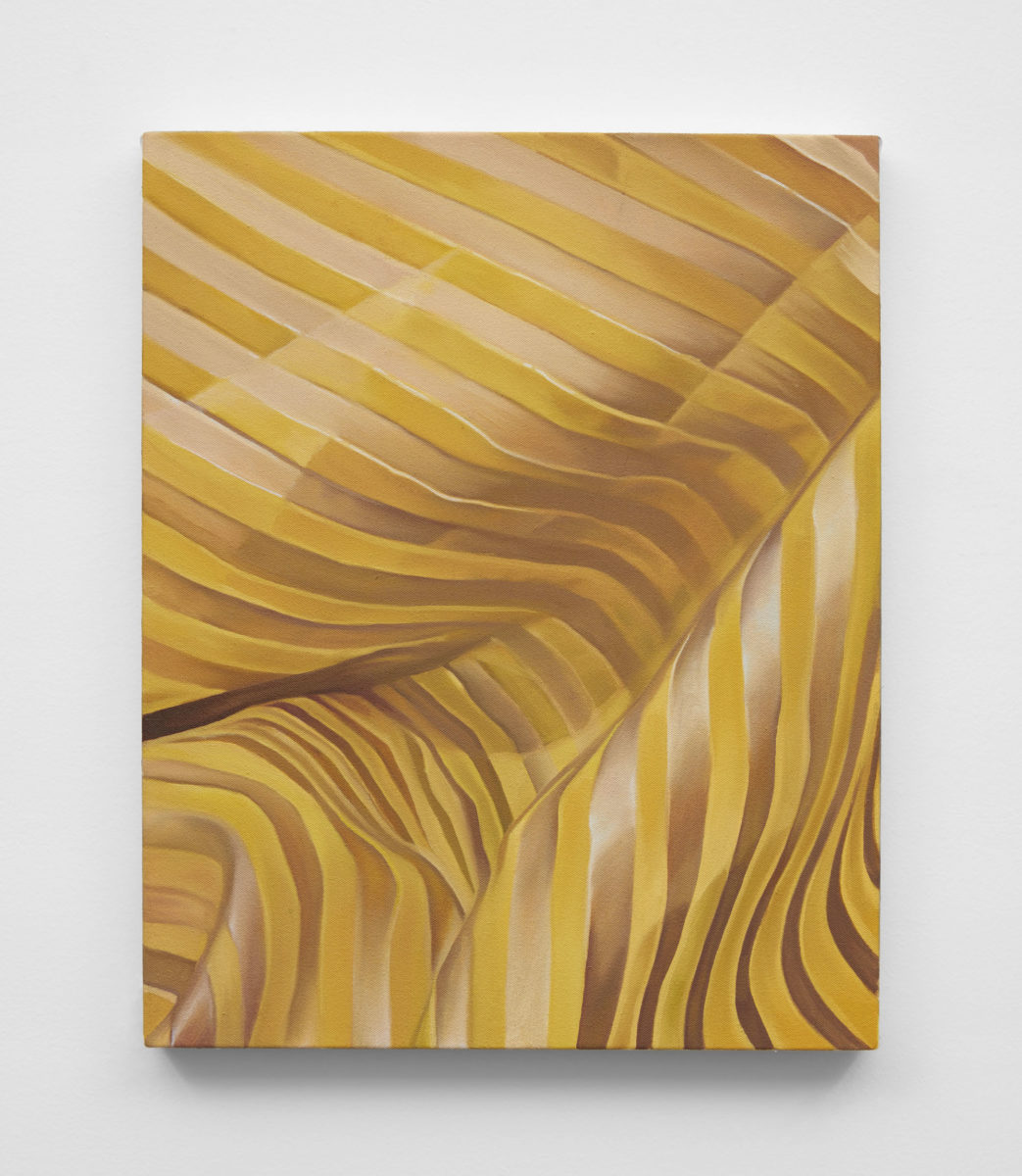 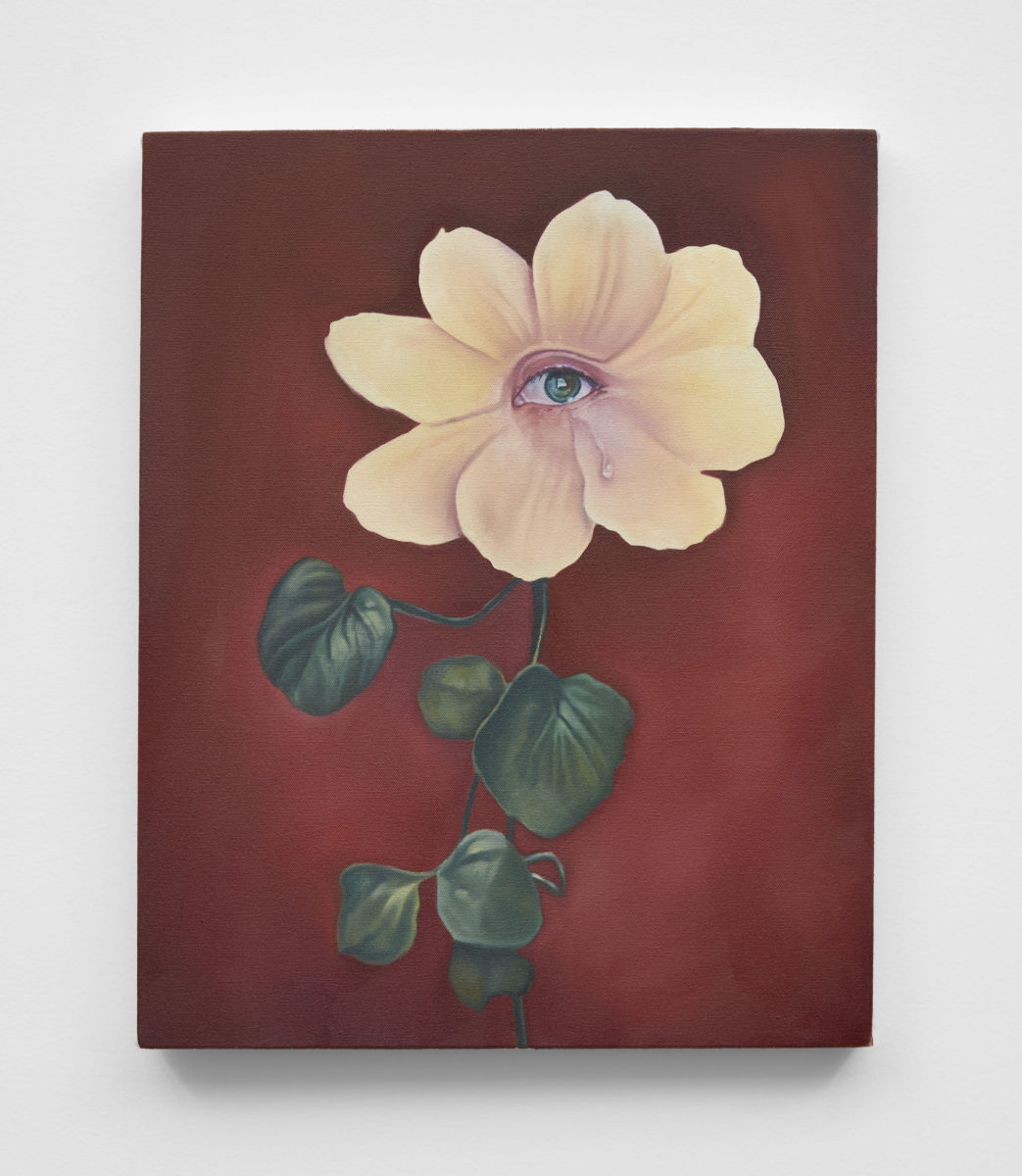 There is something tragicomic about Papademetropoulos’s weeping inanimate objects. A clean departure from her earlier layered hallucinogenic collage-style paintings, the anthropomorphic roses and shells—two classic tropes of feminine representation conceived by men—offer up their tear-swelled gaze, in an ambient but unflinching pastel dreamscape, that feels primed for the theatrical wonderland of Miami Beach. Papademetropoulos, an LA-based artist, curator, and latest face of Gucci (she can be seen jaunting alongside a medieval-fashioned Harry Styles in the Italian fashion brand’s latest campaign) sends a message from the inner chambers of the art, fashion and finance trifecta forming Art Basel Miami Beach, suggesting that things remain, more or less, exactly the same.