Covered with glitter, rhinestones, fabric and sequins, Devan Shimoyama’s paintings dazzle at first sight; collaged fabrics typically used by drag queens and feminine-presenting features come from queer visual language, but the structure for his paintings harkens back to Goya and Caravaggio. “In a way, the work was functioning as much more brazen than I could ever actually be in person. I then began to think of that self-portrait as an archetypal character of my own invention that is used as a tool in which I explore a multitude of themes,” Shimoyama explains, as he prepares to open his latest solo exhibition at De Buck Gallery, New York—his second at the gallery since graduating Yale’s MFA in printmaking and painting in 2014.

“There are so many nuances in semantics of certain terms within that definition such as the word ‘men’ being much more open and in flux,” the artist responds, when I ask what masculinity means to him—something he sees as, “limitless and ever-changing according to how any individual feels at any given moment”.

Shimoyama was born at the end of the eighties in Philidelphia and went on to do a BFA in drawing and painting at Penn State, where he began to consider the politics of gender, dress and race. An earlier series of sculptures on hoodies—February, which Shimoyama dedicates to Trayvon Martin—is the more direct works presented at the artist’s first museum exhibition Cry, Baby at the Andy Warhol Museum, Pittsburgh. Shimoyama explores African-American boyhood and masculinity through the setting of the barbershop, imagining it as a place where male bodies that do not conform with traditional notions of masculinity feel shamed and vulnerable. Elsewhere, mostly through self-portraiture, challenging “conventional ideas of blackness and masculinity and where the two intersect through the queering of typically male-dominated spaces and male portraits” is at the centre of Shimoyama’s world, mystical and utopian, an imaginary space for those same bodies to feel joy and be celebrated; at the Andy Warhol Museum, these works are in dialogue with Warhol’s series Ladies and Gentleman, (1974-5), a lesser known Warhol work, portraying cross-dressers and drag queens.

The way Shimoyama encounters himself through his art is in part a way to reinterpret the dominant narrative of portraiture as an assertion of hyper-masculine identities, overtly queering it into a space for fantasy and fiction—“I often create fictional individuals to talk about fantasy or desire or to even start to approach difficult situations in which I may not feel comfortable asking someone to pose for me. Much of what I paint is actually me creating a desired fictional world.” Art is also a safe space from which to contemplate and elevate the black queer male figure, especially in the context of America’s present politics.

Shimoyama’s earlier practice has focused on self-portraits, but his new exhibition at De Buck, titled Shh, introduces subjects other than himself—some are people he knows and shares a close connection with, others are fictional characters. They are depicted in private, domestic settings, absorbed in books, pensive and contemplative. The figures allude to “a reading list of sorts for those who identify with the subjects… many of these texts present alternatives to the plethora of predominately white American authors who so often dominate those genres,” Shimoyama suggests. Among the books that appear are Yuval Noah Harari’s Sapiens; the publication that accompanied the major touring exhibition, Soul of a Nation: Art in the Age of Black Power; and the experimental feminist sci-fi, M Archive: After the End of the World, by Alexis Pauline Gumbs. They are titles that encourage self-inquiry, revise history and challenge the cultural status quo. Though he embraces the performative gestures, feathers and flowers, there is more to Shimoyama’s queer fantasy.

“I primarily focused on self-portraiture in much of my earlier work in an attempt at self-reflection and exploration of my identity and personal history related to my blackness and queerness,” Shimoyama says. “I absolutely see identity as intersectional. I also think about how identities are complicated by how legible one’s identity comes across to others. Just because one is queer, doesn’t mean that all queerness is treated equally; some people immediately and clearly register as gay through giveaways in how they dress, walk, talk, etc. while others come across as straight upon first glance. I think those nuances make for a gradient of experiences that all deserve to be considered on an individual basis.”

“I think images are immensely influential in how we perceive and understand so much in the world, especially via social media, clickbait news articles, etc. and the way we perceive men is no different,” Shimoyama observes. Though he is not particularly concerned, he says, with creating images that either contribute to or counter the visual mythology around men, “I do think alternative images used to diversify notions of gender and race are welcome and necessary as a tool to disrupt binaries and stereotypes.”

The response to Cry, Baby—which opened in October—perhaps reveals why this matters more than ever: “Many people of colour have told me that they were enthusiastic to have seen black men represented in such a positive way. This comes from people who have seen the show at the museum—a place in which many black people often don’t feel seen, represented or welcome.” 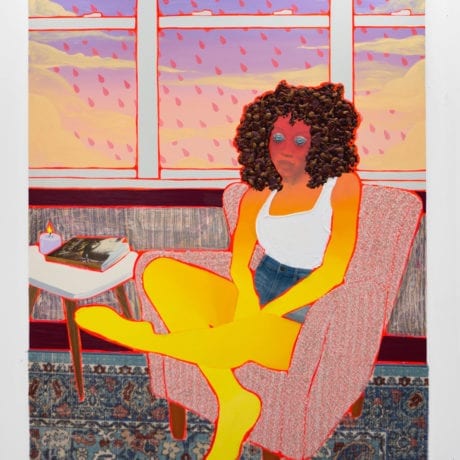