If you can’t beat it—join it. Artists might soon find themselves in explicit competition with the machine, as artworks produced by technology enter the market: just this week, Christie’s announced the first ever sale (starting price, 7000 USD) of an artwork made by an algorithm. What is the subject of this innovative artwork, produced beyond the limitations of a human hand? It’s a portrait of a middle-aged European man. Artists might still have the edge over AI yet…

Meanwhile, at the MAXXI Museum, Rome (until 24 February 2019), a line-up of immersive installations dunks viewers heads into the world of AI, proof that contemporary artists are ready to explore the possibilities of “computer generated dreams, creative algorithms and avatars that question the meaning of existence.” The latter refers to Tay, an AI-ready chatbot, originally created by Microsoft. The artists Zach Blas & Jemima Wyman have their version of the 3D avatar speak in a four-channel video, edited with a psychedelic backdrop created using Deep Dream technology (a computer vision programme). Tay’s main issue is the lack of a physical body. Problems… we all have them, even if we aren’t real.

The earliest adopters of AI in contemporary art include Lynn Hershman Leeson, who was perhaps being the first to use technology to speak about technology, and its impact on our human life and interactions with one another; as the world has developed, AI can itself be a collaborator and an independent artist, raising new questions about the future of creativity and the human position within it. The role of AI is certainly shifting in the art context: it’s becoming more emotive, engaging and present; while there’s no doubt AI still has skeptics in the old school art world sniffing—two generations of artists have now successfully made AI part of their practice. Here are eight of them.

The original pioneer of AI in contemporary art, Hershman Leeson started working with technology in the 1970s, but she has only achieved a cult-like status in recent years. In the late seventies, the American artist first developed her alter ego, a clone by the name of Roberta Breitmore, who could be reconstructed with artificial physical things—clothes, make-up. The work developed with AI in the mid-nineties to become a web-based sculpture, CybeRoberta, and in 2006 she morphed into an avatar on Second Life.

Hugely influential and a hero among art students, early-millennial artist Rafman is a purveyor of internet irony. His well-known obsession with Second Life (the 3D virtual reality that allows people to choose a life they want and live it out online) and interest in “machinima” (real-time in-game filming) manifest themselves in his work in myriad ways. Frequently what Rafman explores through these popular, diffuse alternate worlds, is how they change our state of mind, something he tries to induce through his art.

If Rafman plays on different physical states and relationships, Ed Atkins toys with emotions, digitally reconstructing feelings. A criticism leveled at AI is that robots could never evoke the same intensity of emotions a human could. Ed Atkins turned this idea upside down in his seminal work of 2014, Ribbons. The HD computer-generated subject is as emo as they come, no less sympathetic because they aren’t flesh and blood. His avatar, Dave, who can be bought “off the shelf in a foetal state, as it were,” as Atkins says, is sexy, suffering, fag-stained and drunk—humanity under a microscope.

Cheng’s LED wall, Emissary Sunsets the Self (ESTS) (2017), has exhibited at MoMA PS1 in New York and the Serpentine Gallery in London, and is now on show at MAXXI. The work features a landscape, generated by a video game motor, that evolves infinitely with no human interaction: a simulated world, outside time and real space, with an eerie, never-ending narrative. Is it heaven or hell? The question might apply to Cheng’s piece as much as it does to the possible future of AI.

Like Rafman, Achiampong is inspired by the films of Chris Marker, as well as gaming culture and virtual worlds where we play out the fantasies of our truest selves without social, racial or biological boundaries. Achiampong uses AI as material in his films, such as his Fanon Trilogy, a collaboration with David Blandy concocted in the forgotten parts of Grand Theft Auto. Technology is also the only valid way to build Achiampong’s utopia: The Pan African Alliance.

Bonfili’s ambitious ongoing project, The Infinite End of Franz Kafka’s “Das Schloss”—3412 Kafka consists of a central interactive CGI video installation, experienced though virtual reality visors. Inspired by Kippenberger’s The Happy End of Franz Kafka’s Amerika (1994), itself inspired by Kafka’s Amerika, Bonfili’s work refers to The Castle, Kafka’s last and unfinished novel. In AI, the possibilities are endless, infinite; but that is deeply disturbing in Bonfili’s work. As we move over a 360-degree view of surreal, scary terrains, the effect is disorienting—have we been here before? And where are we going?

“Identity is the name of the battlefield over your code—be it genetic, informational, pictorial.” Steyerl suggested in an interview. I’ve tapped my toes in many of Steyerl’s truly absorbing, prize-winning installation works. Flooded with images and drowned in sound, I’ve often left her works feeling concerned about the dissemination of globalised, digital messages in the age of AI. Steyerl purposefully confronts representation and what it truly means in our times, while in her writing, she addresses the role of social media militia, Twitter bots and spam. What does this slew of information, LEDs, likes and data result in? “I believe that a widespread standard of the contemporary condition is exhaustion.” Steyerl reflects.

Using found archival materials, Agnieszka Polska employs technologies to reconfigure the past, subtly changing the context of history or changing the function of images from old newspapers and manuals, to manipulate our hearts and minds. A former student of Steyerl, Polska’s work with AI is potently politicized. One example of this is the 2017 video work What the Sun has Seen, giving the sun a human face: its beaming surface is created using face recognition technology – a comment on pollution and our collective abuse of the natural environment.

Low Form: Imaginaries and Visions in the Age of Artificial Intelligence 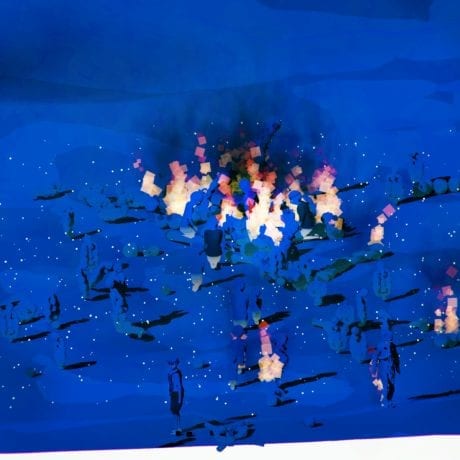