To juxtapose the last year of blockbuster art events—the Venice Biennale, the Whitney Biennial, Documenta 14, Skulptur Projekte Münster—Mexico City’s Lulu gallery presents its second edition of The Lulennial, a pseudo-biennial that opened during the city’s art fair week: something miniature and quiet amid a crowd of dramatic giants. Rather than subscribe to a grand, world-saving vision, the two curators, Chris Sharp and Andrew Berardini, chose to focus on something much more modest: A Low-Hanging Fruit.

There’s something deeper than the cheeky name, though. In the context of the big fairs and in the mega Mexican capital, The Lulennial II promises levity. It also promises not to play by the rules—in agreement with its chaotic unruly surroundings in the streets of Mexico City. It can’t even subscribe to its own purported form, the biennial, instead returning three years on from its previous edition.

Of course, fruit as still life rang through the renaissance and classicism. Beyond that, contemporary art in Latin America and indeed regional politics has been shaped by the humble foodstuff. Only Chris Sharp, co-founder of Lulu along with the artist Martin Soto Climent, could pull something like this off. The Lulennial is his little monster amid a career studded with prestige, which will include co-curating the New Zealand pavilion with Zara Stanhope for the 2019 Venice Biennial.

As if to put a full stop on the exhibition and perhaps to underline the comedy of fruit with some mortality, photographer Jef Geys sadly died last week. In The Lulennial II, two photos by Geys from his 1985 series Fruitlingerie provide some canonical weight and remind us of the impact he had while he was alive as a Belgian conceptualist with a cult following who resisted classification. Those who know Geys’s work love it, but the series of fruit in lingerie is also a little-known allegory of his charming weirdness.

“The exhibition promises not to play by the rules—in agreement with its chaotic unruly surroundings in the streets of Mexico City.”

Of all fruit, the banana is perhaps the most storied in recent history. The crimes against humanity committed by the United Fruit Company—now called Chiquita—are well documented. Similar exploitation of working-class fruit pickers and growers continues on a smaller scale in Latin America, Asia and Africa. Let’s not forget the exploitation of immigrants picking strawberries and apples in the United States. Fruit, although sometimes funny and cute, has a dark side.

Artists Adriana Lara, Naufus Ramirez-Figueroa and Yuji Agematsu all deal directly with the phallic fruit—the sexuality of fruit as a sensual flower and sex organ plays heavily into the narrative of the show. Lara’s classic installation, Installation (Banana Peel) from 2008 perfectly embodies the purposeful ridiculousness of the show. The piece is exactly that, a banana peel, casually tossed onto the gallery floor as if someone has just finished breakfast.

It’s the kind of dense conceptualism that irks art world outsiders—how is that art? But, as Sharp writes in the catalogue about the work of his fellow curator Berardini, The Lulennial II embodies “inappropriateness as a position”, which, ironically but appropriately, is at odds with Lulu and Sharp’s insanely obsessive sense of perfectionism. He would probably disagree. But juxtaposition, even contradiction, is the modest—or perhaps revolutionary—proposal of the show. Art as a polyvalent, multiplistic and indefinable force is the focus here.

What better to illustrate the multiplicity of fruit than an ongoing series by Allison Katz, Arsi-Versi (Nose-Ass-Pear), where small ceramic sculptures allude to the formal similarities between the three organisms with vastly different purposes? Born in Mexico City, Aliza Nisenbaum now lives and works in New York, where she was one of the breakout artists of the 2017 Whitney Biennial. Her works are portraits and still lifes with a political twist, often creating intimate and emotional, rather than photorealistic, representations of immigrants in the United States and the artist’s connection to them. Here, a small painting created for The Lulennial II shows what appears to be a rose, but is actually a strawberry, from a dinner that Nisenbaum and Sharp had in Mexico City.

“Fruit, although sometimes funny and cute, has a dark side.”

One theme in the show—indeed in Mexico and greater Latin America—is that things are not as they seem. In the work by Ramirez-Figueroa, a bunch of bananas is actually a stage prop made from toxic polystyrene and fibreglass, a metaphor for the hidden pathology of fruit in the Americas. How can something so sweet be so evil? Elsewhere, one of the most unassuming pieces in the show, a life-size cherry adorns a small white shelf protruding from the wall of the gallery. The artist, Luis Miguel Bendaña, who also co-runs Queer Thoughts gallery in New York, created the tiny sculpture from powder-coated cast bronze, so, although it looks real, the succulent sweet flesh is replaced by bitter metal. In another material stunt, Lisbon-based Mexican-born Rodrigo Hernandez has created what appears to be a solid abstract relief rendering of a papaya in a geometric square that sits off from the wall, but it is in fact papier-mâché. Hernandez’s material magic never disappoints.

Despite its tiny size, The Lullenial II packs twenty-two artists into the tiny space, proving that bigger isn’t necessarily better. The show is funny, but also seriously against the sensationalism and accelerationism sweeping up everything in the world on a path toward ultimate obliteration of what we know and love, consuming ourselves like fruit. Sweet.

The Lulennial II: A Low-Hanging Fruit 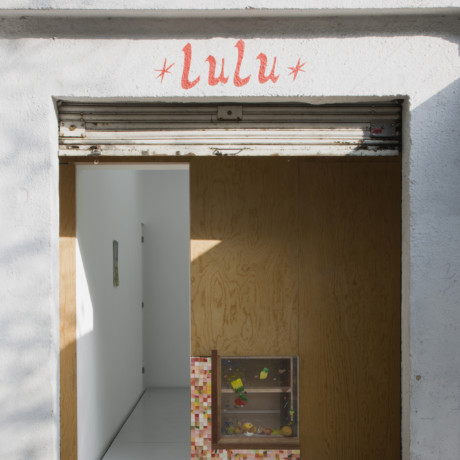