First, it felt very odd. Now, as the weeks have gone by, it’s just the way it is: if shows can’t happen in real life, we’ll have to make do with them being online. In this brave, rather flat new world of exhibitions seen purely on screen, viewing art as little more than a collection of pixels remains a sad facsimile of the “real deal”. But it does interestingly bring artists to the fore who focus their gaze on interiors, and also highlights those who deal with digital replica rather than IRL inspiration.

One artist whose work has long ticked both boxes, is Gretchen Scherer. Her paintings of empty museums feel oddly prophetic now, painted pre-lockdown, and by choice rather than necessity, depicting desolate, empty interior spaces. Scherer’s process is to view various collections from galleries and museums around the world online. She then selects her favourite paintings and sculptures from each museum and creates amalgams, like a sort of greatest hits as gathered from collections that might be graphically and temporally thousands of miles apart. Among the institutions the artist depicts are the Hermitage Museum in Saint Petersburg, Russia; The Wallace Collection and Ham House in London; The Louvre in Paris; and New York’s Frick Collection.

Unless you already know of the artist’s process, it’s hard to gauge that these strange conglomerations are what shape her neatly ordered tableaux. Her skilful manipulations of this assorted subject matter mean that each painting is its very own salon-style hang, formulated from a careful rearrangement of source material gathered, magpie-like, from internet searches, books on interiors and the artist’s own imagination.

The unpeopled spaces feel eerie, as though some unseen catastrophe has caused a mass evacuation—or perhaps, a wealthy family with a keen eye for art has simply abandoned their riches and fucked off elsewhere. Once you get past the sense of disquiet at the people-less scenes, there’s a definite sense of playfulness here, too: the audacity to cherry pick favourite works and objects and rearrange them just as the artist deems they should be is pretty brilliant.

Scherer was due to show her recent series of paintings, Love Letters, at Monya Rowe gallery in New York from early April, but naturally—and rather fittingly for this work—the images are being showcased in an online gallery. And while we’re sure that this collection of jpegs doesn’t entirely do the work justice, it seems as though the medium of the online viewing gallery befits the works that “hang” there.

The excess of imagery challenges the viewer’s relationship to space, memory, and objects,” says the gallery’s founder Monya Rowe. “Embracing a contemporary interest in the ways in which objects are experienced—the artist has never visited some of the places depicted—Scherer hints at the current image-saturated culture that social media forces upon us. An intersection of art history and the modern world.” 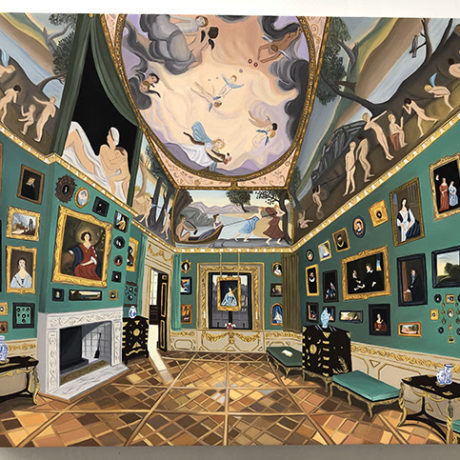