When you think of a trip to Ibiza, contemporary art isn’t the first thing that springs to mind, and it definitely wasn’t on the radar of my fellow passengers on the 10pm flight from Gatwick Airport, London. As an Ibiza virgin, I wasn’t sure what to expect beyond super clubs and shots, and as I attempted to explain to my plane neighbours that I was heading out for a twenty-four-hour round-trip to visit an art deco-inspired, hotel-cum-gallery, I was met with bemusement and immediately invited to an all-night party.

It might have been a bright idea to take up the invitation, as it’s clear that no one in Ibiza is interested in sleep. When I arrive at the Hotel Art Paradiso, which dazzles like something from a Las Vegas fever dream on an otherwise down-at-heel street in San Antonio, guests are rolling out ready to start their nights, while others gather in a drunken stupor around the pastel pink swimming pool. One or two guests do peer into the perspex box in reception, which seems to serve as a show room for the hotel suites. In fact, it’s a slightly outlandish take on an artist residency. Individuals are invited to stay in the “room” for free, if they “create their interventions” on site. Whether or not many people will be up for being on display 24/7 remains to be seen.

Beyond the quizzical cube, it’s hard not to be impressed by the interiors. They are designed to be something approximating Miami Modern, but in reality, are more akin to a life-sized version of a Barbie dream house. Does Barbie have an art collection? I’m not sure, but if she did, it would definitely look a lot like the offerings at the Paradiso. Each room is named after the artist whose work it has on display; ranging from illustrators and photographers to street artists and designers, most of whom employ eye-popping colour, such as Mònica Figueras and Brolga. The works are on long-term loan, but the lobby focuses as more of a flexible (and traditional) exhibition space with more of the same.

“People are here for parties, but our goal is to show quality contemporary art,” says Iñaki Domingo, co-curator of the artistic programme, along with photographer and filmmaker Diana Kunst. It would be a tall order anywhere on the island, but should prove particularly difficult in San Antonio, which is known for the rougher side of package holidays and a “Brits abroad” mentality—there’s a greasy spoon nearby called Fatso’s British Café. “However, the context is that people are here on vacation, so we need to be aware of that context and work with it,” Domingo continues. It’s a shrewd observation, and well-received. Too often the hospitality industry announces grand aims to critically engage with the visual arts, but it rarely amounts to much.

Beyond the art in the bedrooms, the curators have been placed in charge of coordinating a series of pop-up gallery residencies in an allocated space, accessible both from the hotel lobby and directly from the street. At present it is occupied by Adda Gallery, a Parisian organization that showcases street artists, illustrators, sculptors and other multidisciplinary practices that fall under the umbrella term “urban art”. Its inaugural Ibizan exhibition, somewhat predictably named Technicolor, brought together works that were saturated in high-tint colours, including geometric sculptures by Kenor and a full-size exterior mural by Nuria Mora. The second is titled Landscapes and features some dreamy eighties-inspired portraits of poolside living by Yoko Honda and impossibly pink photographs of unpopulated terrain by Ryan Struck.

These two shows definitely feel like an extension of the Paradiso’s hotel displays. They follow the same premise of accessible, aesthetically pleasing and Instagram-friendly art, and it will be interesting to see how different galleries choose to interpret the slightly bizarre hotel-pool party residency remit, and whether they’ll stay within similar confines.

“Does Barbie have an art collection? I’m not sure, but if she did, it would definitely look a lot like the offerings at the Paradiso”

After seeing the gallery, I felt confident that I understood the parameters of the Paradiso project. It isn’t positing any groundbreaking artistic intervention, but merely trying to engage some of its patrons in various forms of accessible art practice. However, the hotel did have a surprise in store. During the opening party, where hoards of dolled-up invitees attempted to fulfil the baffling dress code: “Cool hats/white bermudas/pastel blazers/shiny dresses/dark sunglasses/something that Andy Warhol would want to film you in” and sunk impossibly enormous mojitos, two performers took to a makeshift stage in front of the DJ booth.

The pair, part of an experimental dance collective called Kor’sia, began twisting and turning in a series of beautifully choreographed movements that seemed to transcend the noisy and semi-attentive crowd. Assembling themselves seamlessly into some exceptionally difficult double-jointed poses, they appeared as if from another world, emoting an intense, intimate energy, like a mirage imagined by my sun-drenched and alcohol-addled brain. A few minutes later, it was all over, and the crowds resumed their cocktail sipping and hair tossing, while I remained slightly confounded.

I’d like to say it was a surreal end to a surreal trip, but this is Ibiza. As midnight approached there were a full eight hours before I had to catch my flight, and so I was whisked off for some hardcore partying at Pikes, the legendary hotel that has counted Freddie Mercury, Jimi Hendrix and Grace Jones among its guests, and also served as the set for Wham’s iconic music video for Club Tropicana. And before you ask, no, the drinks definitely weren’t free. 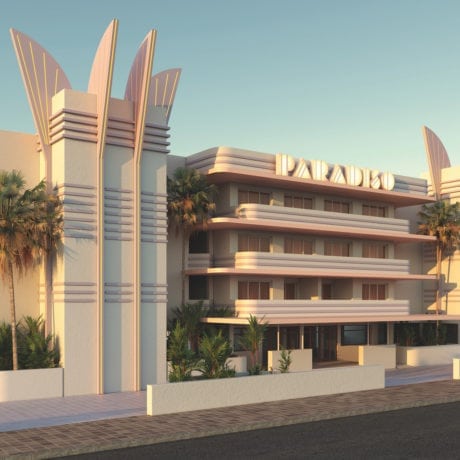