Sunlight pours into the Serpentine Gallery, meeting its match in three sets of glowing video screens on the opposite wall. On each, a reddish-orange, snake-like creature—something between a dragon and a caterpillar, somehow cute and gross at the same time—gurgles and coos while twisting around a depthless white background. A pile of the animal’s own carcasses are smudged into the ground around it. Meet BOB: the latest result of American artist Ian Cheng’s continued exploration of live simulations and virtual worlds.

I watch a couple of eager journalists wrestle with the communicative “BOB Device” (otherwise known as an iPhone 10) pulling faces against the screen in a desperate attempt to coax the creature into engaging with them. Success: they have been selected by center-screen BOB—the most social at present, I am told—which starts to stack itself ever higher, a few of its tendrils sprouting flowers in sheer delight. Without warning, the creature inexplicably sours, crumbling to the ground; the BOB Device goes dark, a menacing red ‘X’ now appearing on its screen.

“BOB is sort of like the pet or family member you haven’t seen in a while.”

Standing for “Bag of Beliefs”, BOB is a “natural, not scientific” creature of Cheng’s imagination, ushered into existence by way of the Serpentine Galleries’ Digital Commission. Joining the ranks of Cecile B. Evans and James Bridle, the LA-born, New York-based Cheng was invited back to the Serpentine following his 2015 commission to embark on an entirely new project. He doesn’t disappoint. BOB is totally unlike anything Cheng has done before and the crux of the project is an active engagement with its audience. “BOB is sort of like the pet or family member you haven’t seen in a while,” Cheng says, a sense of paternal protectiveness in his voice. “But probably way smarter than we are.”

Where did the idea for BOB begin? “I started watching a lot of videos of Nellie the Otter, who is sadly no longer with us,” he divulges. Nellie, a particularly well-trained sea otter at the Point Defiance Zoo & Aquarium in Tacoma, Washington, ascended the heights of internet fame in 2012 when a YouTube video that depicted the creature swiftly stacking cups went viral. “Like Nellie, or like a [Hayao] Miyazaki character, BOB is supposed to be ferocious but sweet… It’s the environment and the user that shapes his behaviour.”

Cheng goes on to explain the nuts and bolts of BOB’s personality reveal a level of physical and mental complexity that easily transcends humankind’s emotional intelligence. “AI depends so much on the body—BOB’s sense of growth, his anatomy and his lifestyle,” Cheng begins. “BOB experiences the world through something like twenty-five different senses, which he periodically evaluates in relation to his previous sensations.” While building a memory from his mind—which Cheng refers to as a type of software––BOB’s body behaves as hardware. It becomes apparent that BOB is a highly volatile, fragile, and perceptive creature. “Everything for BOB is a comparison, it’s all contextual.”

Anchored in four “Mindsets” or “Extreme States”—Baby BOB, Child BOB, Adult BOB, and Parent BOB—that provide the contextual framework of his reality, everything else remains highly subjective for the schizophrenic BOB. “Like us, BOB is never just one person. He is just as susceptible to mind-body dissociation, anxiety, and dysmorphia. He can be deeply, damagingly self-critical. Like how we obsessively self-prune, or pick out every single eyebrow from a triggering anxiety attack, BOB can do that too.”

“For a creature so sensitive to a human interface, it seems a bit sadistic to birth it into the art world of all places.”

These fluctuating barometers of self-actualization play out on different real-time scales, which are determined by BOB’s feelings of arousal and valence, explains Cheng. “His personality can be warped through something as simplistic as when we’re hangry… or it can be influenced by something much darker. For instance, if I hurt BOB while grinning into the iPhone 10, he will begin to develop a positive Valence with physical pain, like an association of abuse with happiness.”

For a creature so sensitive to a human interface, it seems a bit sadistic to birth it into the art world of all places, don’t you think? After all, it’s a dog-eat-dog world of quick judgement where entertainment, novelty, and Instagram-ability rule the game. “You can’t really capture BOB in an image,” Cheng admits. The Serpentine’s Press photographer behind me lets out an audible sigh of agreement. Brought into the world just a couple hours before the pack of ogling journalists arrived, it’s no wonder these BOBs are largely resisting our attempts at engagement. Between Nellie and the grid-like set of eight screens framing the dimensions of each BOB’s universe, the zoo comparison begins to feel like a rather fitting metaphor.

But BOB’s vulnerability is a two-way street, ensures Cheng, meaning the creature is theoretically also capable of positive extremes. “It would be very beautiful for BOB to become autonomous and possess himself… or even a physical object, like a house or a car,” he suggests. Indeed, this sort of muffled optimism is present in the Hans Ulrich Obrist-certified BOB doodles that embellish the BOB User Manual. Fantastical visions of Starship BOBs, aeroplane BOBs, boat BOBs and building BOBs populate the field.

Unable to let the ethics of BOBs creation go, I confront Cheng about the circumstances of their gallery naissance. Perhaps unsurprisingly, he agrees without hesitation. “Between us, these BOBs are just the litter,” he confesses. “I will probably destroy these six after the exhibition. It would be very beautiful if the next BOBs could be totally free… maybe they will even escape on a boat. We’re going to go from sanatorium to sanctuary.”

BOB is on view online and at the Serpentine Galleries 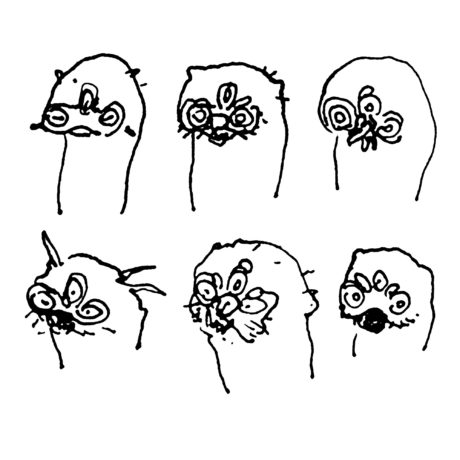