None of us will ever be able to taste the same delicious cherry pie, sip the same damn fine cup of coffee or leave voice messages for the mysterious “Diane” as Dale Cooper (the FBI agent protagonist of David Lynch’s Twin Peaks, for the non-viewers) does. For all earnest eccentricities, though, Cooper is a pretty great detective—in a way that within Lynch’s universes, we as viewers, never can be.

Throughout his TV, film and visual art work, Lynch doesn’t necessarily want us to solve things, and he resolutely won’t do it for us. While he speaks openly and sincerely about his creative process—much of which is rooted in his transcendental meditation practice—Lynch has always remained oblique about his meanings: he has said, simply, “I never interpret my art. I let the audience do that.”

His evasive impulse is likely a deliberate ploy to reel us in, like the fish Lynch so often uses as a metaphor for creative ideas, forcing us to swim upstream to understand the work. Across his paintings and moving image pieces alike, Lynch makes us work hard to figure out what the hell is going on. Perhaps it’s that quiet enforcement of visual and mental gymnastics that makes it so fulfilling and memorable—as anyone who’s seen that Blue Velvet (1986) shot with the severed ear, will attest; the hairbrush scene in Elephant Man (1980); or the terrifying chicken dinner and lady in the radiator in Eraserhead (1977).

“His evasive impulse is likely a deliberate ploy to reel us in, forcing us to swim upstream to understand the work”

The lack of obvious explanation, both within the films’ own narrative and in Lynch’s refusal to divulge his intentions, gives viewers the agency and satisfaction to seek out meaning and significance. Lynch’s inherent demand for active viewing over passive appreciation isn’t just in his TV and film work—it carries through to his paintings, sculptures, and installation pieces.

At the opening of Lynch’s first major UK exhibition My Head is Disconnected, which presents his large-scale paintings, drawings and sculptures at Home in Manchester (until 29 September 2019), the curators suggest that we as viewers must play “detective” to figure out what’s going on in the works, and form our own narratives and possible meanings. But that’s not an easy task. Lynch’s works manage to simultaneously throw us convincing leads to chase down, and overwhelm us with hilarious red herrings.

Bob, for instance, is a character that appears across a number of paintings. Any Twin Peaks fan would assume that he’s another iteration of the “evil” Bob in the show, a shapeshifting, demonic being that can take over a human body with horrifically dark consequences (spoiler alert: it’s pretty certain he was behind the death of posthumous, polythene-swaddled Twin Peaks heroine Laura Palmer).

David Lynch, Bob Finds Himself in a World For Which He Has No Understanding, 2000

However, as becomes apparent, “Bob” is one of a series of characters including Billy, Sally and Ricky that Lynch casts in his paintings. Such names feel almost childlike—as, indeed, does the sense of wonderment and unique cognitive associations that imbue Lynch’s art amidst the darkness. While “Lynchian” as an adjective is shorthand for the surreal and the eerie, this exhibition in fact proves his work is frequently very, very funny.

“Lynch’s works manage to simultaneously throw us convincing leads to chase down, and overwhelm us with hilarious red herrings”

Take the titles of the works: one catchy number is Who Is Outside My House My Dog Is Running Away They Come In Thru My T.V Where Is My Dog (2018), a piece that merges Lynch’s distinctive scrawled handwriting with Rorschach-like ink splodges and demonic, cartoonish heads and red dots—blood, perhaps? Did the TV guys kill the dog? Are they the same “they” who are outside the house? Maybe the dog came in through the TV, too, and he’s making a run for it. It’s a lot to take in, and there is little resolution to be found. Turns out I’m no detective.

Other titles read like David Shrigley-esque visual one-liners, such as Oh, I Have Made a Mess (2009) or I Not Know Gun Was Loaded Sorry (2005). The snippets of wry humour are useless as “clues”: for its cutesy title, Billy (and His Friends) Did Find Sally in the Tree is thoroughly bleak, with a thousand possible nightmarish narratives that ironically features in a section of the exhibition titled Bedtime Stories. A woman in a blue dress, a recurring character throughout Lynch’s art, hangs on a noose from a branch. Billy’s multiple eyes are on spindling stalks: a body-horror memento to the things he will never be able to unsee. There’s a Chapman Brothers-like quality to the textural mixed media approach of these pieces, and their marriage of jest, death and boyish grotesquerie.

Any Lynch fan visiting the show will find it hard to resist comparing motifs from his paintings with those in his films: Billy’s big gloves recall that bizarre episode in the most recent Twin Peaks series starring a little Cockney fella (played by Jack Wardle, who Lynch discovered through his YouTube channel) with a magical glove. When it comes to intertextual connections; other sections demonstrate an even clearer synergy between Lynch’s film and visual artwork.

The show at Home features a series of mixed-media lamp sculptures, all conceptualized and fabricated by Lynch himself. Light has a multiplicity of meanings, especially in film—as a meta-reference for the medium of cinema itself and its pioneers the Lumière brothers, or as warning, to name a few. In his discussions of transcendental meditation, Lynch often uses the lightbulb as a metaphor around new ideas of consciousness.

“Lynch’s visual art weaves together humour and bleakness, joy and confusion, just as much as his more famous film pieces”

Yet in his films—particularly the L.A Trilogy (Lost Highway in 1997, Mulholland Drive in 2001 and Inland Empire in 2006)—electrical light takes on sinister nuances that unearth their counterpoint, darkness, rather than offering guidance or hope. In Lost Highway, the aura of unease is heightened by Lynch’s use of flickering light. Things take on a lysergic, hallucinatory quality at the Lost Highway Hotel with intermittent flashes of unnatural blue light. The lighting repositions the hotel, and as such the viewer, away from reality and signals that we’re now in a more abstract and distorted mental space. As such, we now know there’s no reliable narrator. With these cues, we could assume that Lynch’s light sculptures aren’t just the product of a simple childlike fasciation with the texture of a lightbulb.

Having played at being detective—a fun but nigh-on impossible task—we’re little the wiser to what it all means. Yet this heightens rather than negates the work’s potency: Lynch’s visual art weaves together humour and bleakness; fables and non-linear narratives; joy and confusion—just as much as his more famous film pieces. Lynch’s first love is painting and he studied just this, first in Washington and later in Boston; he has spoken about the fact that he initially set out to make films in order to animate his static art and make a “moving painting”.

In an age where we’re constantly being told what other people think, where it is easy to think less than ever for ourselves, artists like Lynch prove the power in making work that forces us to come to our own conclusions. As Lynch’s Fred Madison puts it in Lost Highway: “I prefer to remember things my own way.”

David Lynch, My Head is Disconnected

At Home, Manchester until 29 September 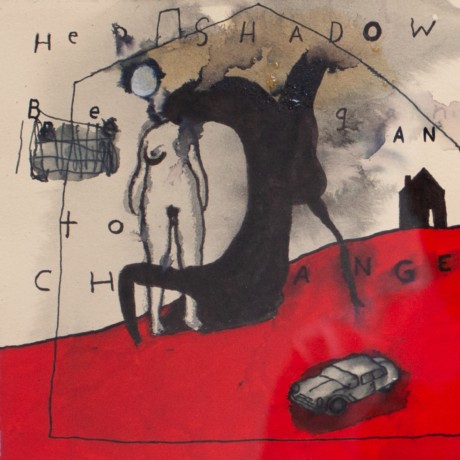