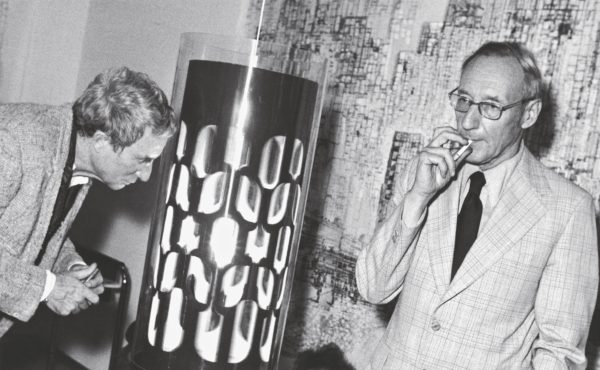 Christoph Markwalder, Brion Gysin and William Burroughs with the Dreamachine, 1979

There’s something very captivating about the schism between the suited, smart, nonchalant gentlemen here—writer William S Burroughs and artist Brion Gysin—and what they and their work came to stand for as bastions of teen countercultural idolatry. The star of the show in this snap, however, is the pair’s most famous invention, the Dreamachine—a basic creation with bold ambitions formed from an illuminated, spinning perforated paper tube. The idea is that when people sit, eyes shut, in front of the machine, the light waves emitted at between eight and thirteen Hertz mimic the brain’s alpha waves and induce a state of meditative relaxation. While the machine has been recreated time and again since its initial outing, the original was first unveiled in its fully functional form at Miklos von Bartha’s gallery in Basel in 1979 when Burroughs read from his novel Naked Lunch, shocking his crowd of fifty listeners. Now, Von Bartha gallery is revisiting that event with an exhibition simply titled The Dreamachine, on show until 1 February. The exhibition promises to offer an “extensive retrospective of the universe around the Beat Generation” alongside original construction plans and prototypes of the Dreamachine and archival photographs.