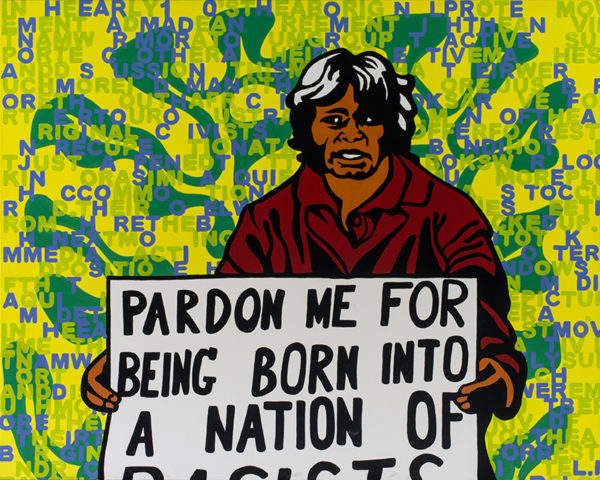 Richard Bell and Emory Douglas, Foley Vs The Springboks (Green), 2014

This powerful work from 2014 is a collaboration between the American graphic designer Emory Douglas, the Revolutionary Artist and Minister of Culture for the Black Panther Party, and the Australian artist Richard Bell, co-founder of the Brisbane-based aboriginal art collective, proppaNOW. It depicts the Australian activist Gary Foley, protesting during the 1971 South African Springbok rugby tour—a time when “anti-apartheid supporters from around Australia protested against South Africa’s racist politics and their human rights record” (UQ Art Museum). The word “racist” is cut off, but we can all finish the sentence; all understand the message: almost fifty years on, and shamefully little has changed, in America, Australia, South Africa, the UK and across the globe.