At first glance, this image of an urban street seems quotidian. Scaffolding frames the pavement; a pair of men engage in conversation; the crossing lights proclaim, “Don’t Walk”. Look closer, and the work of Martine Gutierrez reveals itself. The seemingly innocuous poster pasted onto the hoarding in the background is not, in fact, an official advert for Quezalteca Especial, but a careful subversion.

The artist appears as the indigenous woman who has long featured on the Guatemalan liqueur’s label, as well as her aristocratic European counterpart, complete with powdered wig and a lily-white, painted face. The slogan reads, “Keep your friends close and your oppressors closer!”

This photograph, shot the day after the poster was pasted up, first appeared in Guiterrez’s Indigenous Woman project, where she fulfilled the role of model, photographer, stylist, creative director and editor-in-chief, creating seamless editorial and advertising campaigns that questioned ideas of heritage, gender, race, femininity, and the basic act of looking, through the very particular lens of a fashion magazine. “By digging my pretty, painted nails deeply into the dirt of my own image I am also probing the depths for some understanding of identity as a social construction,” she says.

“She turns the gaze towards not only the very narrow confines and expectations of mainstream advertising, but also the scene that surrounds it“

While Guiterrez’s usually places her body front and centre, in this instance her illustrated self destabilises our preconceptions. She turns the gaze towards not only the very narrow confines and expectations of mainstream advertising, but also the scene that surrounds it. You begin to wonder why the elderly man is holding a bouffant, blonde wig? Is that ‘Antifa’ sticker another jibe at official branding? Who is dragging the dog? Is the entire scene, in fact, a setup? Through her image, she encourages us to contend with the social constructs we take for granted every day. 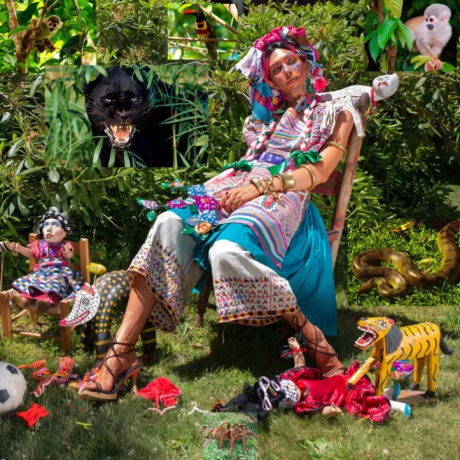