Trained in both graphic design and cabinet making—and inspired just as much by MTV logos as the work of Frank Stella—American artist Josh Sperling holds an unusual position within the gallery space, creating commanding, sprawling works which respond to their surroundings. His new exhibition is about to open at Perrotin in Paris, bringing over 300 canvases together for just one of the installations within the minimal interior of the gallery. I caught up with him, ahead of the exhibition’s opening.

Can you tell me a little about your upcoming show at Perrotin in Paris?

The upcoming show in Paris is titled So It Goes and is divided into two rooms. Room #1 is a series of five large circular pieces each consisting of only two colours. Four of these works are constructed using a new “weave” technique where the canvas support is actually bent during production. This allows the shapes to move over and under each other creating the appearance of a weave or braid. This was a major technical development and I am excited to see where it will lead my work. Room #2 is an immersive installation similar to the show at Perrotin Tokyo, except this time the squiggles are all black. This is my first monochrome squiggle installation and the outcome is extremely intense with the black squiggles contrasted on the white walls. There are over 300 separate canvases that make up this installation!

This is the second time you have worked with the gallery in Paris, though this will be in a different building. How have you approached the space differently this time, and what does this particular gallery architecture bring to your practice, which is obviously very responsive to the spaces you exhibit within?

The St. Claude space at Perrotin Paris is more minimal than the space I exhibited in last time. The cathedral ceiling in the St. Claude gallery, with its beautiful skylights, gives me the feeling of a minimal church, which evokes contemplation within the space. I believe my minimal works, and minimal art in general, evoke these same feelings of contemplation through the observance of geometric truths. Room #2 of St. Claude is a windowless white box. I thought this would be the perfect room to create a totally immersive installation without inherent architecture or windows to distract from the experience.

Donald Winnicott’s “squiggle game” is mentioned in the show’s release, in connection with the forms you’ve created. I like the description of these evoking both the future-thinking, tech-optimistic visual language from 1980s graphic design as well as the symbols of an ancient language.

It is interesting to connect parallels with Winnicott’s goals for his patients and my goals for my audience.  Winnicott wanted to use the squiggle drawings as a call and response Rorschach test to bring to light the inner thoughts and feelings of children. I have a similar goal with my work. I enjoy combining shapes and colours to suggest an idea, feeling or object (the object usually being a face). But I always want to keep the work ambiguous enough so the viewer can see something in the art that comes from their own subconscious.

“Art is great because you can do whatever you want”

You reference everything from MTV chameleon logos from the 1990s, to the minimalist paintings of Ellsworth Kelly and Frank Stella within your work. What it is that might first excite you and draw you to a new a visual or cultural source? Are you a heavy researcher or more spontaneous as you work?

I am definitely a heavy researcher. Lately it has been art deco objects, Nudie Suits, Cartier jewellery, and also jewellery of ancient South American cultures. Geometry and material is what generally draws me to something new. The MTV logos and all the Memphis influenced advertisements that were happening in the early nineties have permanently permeated my skull. It was burned into my mind when I was a child and it is working its way out later in life. Kelly and Stella have had a big influence on my work, especially Stella.

You were trained originally in graphic design and cabinet making. What led you to your current practice, and how do elements of your training play out within this?

My job training has heavily influenced my final artistic product. I was always encouraged to take my artistic talent and apply it to more commercial arts like industrial and graphic design. I was encouraged to do so because many people warned about the slim chances of making it as an artist. I learned the skills of woodworking and graphic design and enjoy the process of both. I never stopped making art and I figured why not use these skills I already have to make my paintings. But I always hated the constraints of commercial art, specifically having to collaborate with clients or coworkers. Art is great because you can do whatever you want.

From 12 October to 21 December at Perrotin Paris 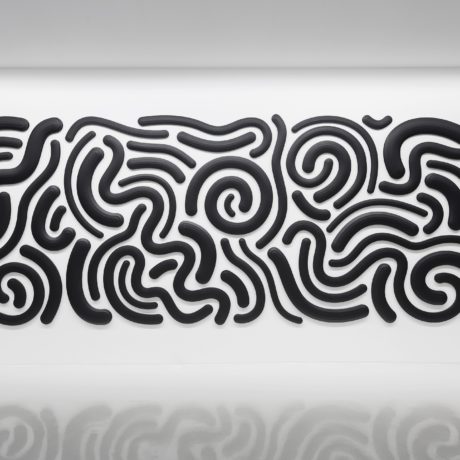 Mermaids are mythological beasts, but they have a lot to tell us about the real world. The artist has recreated her sublime installation for Gucci’s exhibition in Seoul.
Read More 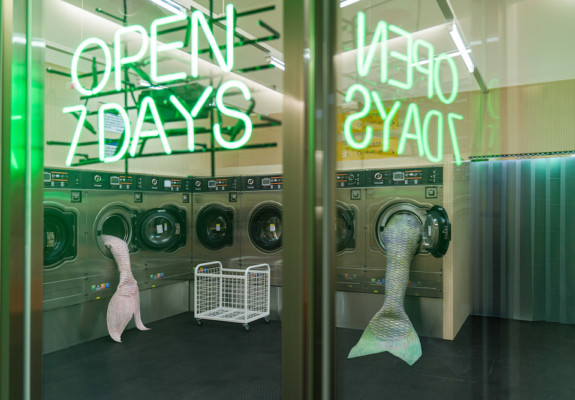