Out today on Artsy is Emily Kirkpatrick on Jenny Saville’s Strategy.

The only time I have been to America was in 2008. The flights were paid for by a boyfriend who saved money from cleaning university halls during the summer break. He worked strange nocturnal hours with another friend who lived with us in South London, and they would arrive home from shifts with murky stories about things found in rooms vacated by conference visitors. The plane tickets were a surprise Christmas present. Initially I had a bad reaction, feeling overwhelmed by a gift I could not reciprocate. Eventually, I realised I should be excited, and that the tickets were not a power move—he just wanted us to have fun.

I did what I always do before going somewhere and feverishly researched where we could eat, reading reviews of places and cross-referencing them with others. American food has always been the stuff of fantasy for me. Pancakes and syrup and fried chicken and pizza and refills—refills!—and a slice of pie with whipped cream. The materiality of films such as E.T., Home Alone and Grease were mesmerising to me as a child. The diner scene in Grease where Rizzo shouts, “finish this!” and throws pink milkshake over her boyfriend Kenickie is magnificent, but I just envied her milkshake. The easy attitude of casual diners and the freedom of ordering everything-with-a-side-of-everything seemed unbelievably brilliant. It was the opposite of how we ate at home, where the disapproval of anything suspiciously American prevailed: thick pancakes, maple syrup, Halloween.

We slept, sweat-drenched, on the floor of a friend’s apartment, with no air-conditioning during a hot and humid September, and took subways in all directions to the restaurants I had identified. We waited an hour for a 24-inch pizza made by a seventy-year-old man in Midwood; ate our first sweet potato fries in a chrome plated roadside café; ordered fried chicken in a galvanised bucket from a restaurant with a clipboard-wielding woman in a tailored mini dress on the door; ate delicious spicy Korean food in a basement of an Asian supermarket, and marvelled at being served complimentary coffee while queuing for a diner in Brooklyn. But the dining table that made the most enduring impression on me was one I hadn’t planned, situated in the Brooklyn Museum.

“I had never been in a place where so many women were named. Never. They weren’t on the radio, or on TV, or in the books that I was studying”

I saw the museum on the map after we’d had pancakes, grits, bacon, eggs, maple syrup and three cups of coffee. We were sitting in Tom’s Diner, a short walk away on Washington Avenue, buzzing from the refills. When we finally got there, I lingered over curved, biomorphic pieces by modernist jeweller Art Smith and complex, erotic embroideries by Ghada Amer on display in the Centre for Feminist Art. Then I turned a corner and was enveloped by a vast, dark chamber with a huge triangular table that glowed under spotlights. As I made my way along one plane of the triangle, I saw that each seat had a woman’s name embroidered on a fabric place setting. Laid on each setting were ceramic plates in vulvar constructions of every wild form and colour. And when I looked down at my feet, I saw more women’s names splashed in gold across a tessellation of triangular tiles.

I was overwhelmed by the way in which the table took up space. So much space. Space on the scale of a new cosmology. The room was enormous, and the table took up all of it. I could see nothing else but the table, and it was a table for women. I had never been in a place where so many women were named. Never. They weren’t on the radio, or on TV, or in the books of theory or history that I was studying. Some I recognised, and many I did not. The table showed time and history in a new light. Not a single, straight line of a man, then a man, then a man. Not Napoleon, Bismarck, Hitler, Churchill (the weighty biographies that had surrounded me as a child). Not Leonardo da Vinci’s Last Supper, which is one long table with men sitting in a line and the most important man in the middle. Instead, here were 39 mythical and historical women in a triangle, facing each other.

Here was a table with three planes the same length, all joined to make the strongest shape. A triangle is a shape that supports the weight of others; it is a shape that lends itself to tessellation. Looking down at the pattern of 2,300 tiles with the names of 999 women, I saw an image of history as cumulative and interconnected—no origin, no first, no most, no best, no biggest. The table got me thinking about how the arrangement of space impacts on the operation of power. I began to consider time and history in a spatial way; the shapes that narratives have (shapes in a literal sense), and how they establish and perpetuate hierarchies and systems of oppression.

The Dinner Party affected my writing and research, and continues to do so. I was not used to seeing a dinner table that privileged the voices and appetites of women. An image of men, discussing supposedly important matters over a meal prepared by women, was more familiar. Judy Chicago’s installation said: see how women have made the world. It demanded that we listen to them and let them eat. It was an impulse I had not witnessed before. Seeing Chicago’s piece contributed to me beginning, tentatively at first, to write about cooking and eating. It gave me the confidence to enquire into forms of knowledge not afforded status by patriarchal, capitalist culture. The foregrounding in the place settings of crafts like embroidery, typically not taken seriously by the artistic establishment, made an impression on my academic work, too. A few years later I began a PhD about a feminist version of the Odyssey, which takes Penelope’s weaving trick as an instruction for how to unweave and reweave history to include women, queer figures and monsters.

“Judy Chicago’s installation said: see how women have made the world. It demanded that we listen to them and let them eat”

The installation was jointly produced by 129 people between 1974 and 1979, a process that was documented by Chicago and honoured by a large acknowledgement panel. 2008 was an early point in my political awakening from a rural conservative upbringing, but seeing images of people working together to make a piece of radical art amazed me. The Dinner Party took feminism beyond theorising the individual and placed it in a historical and political context. Here was a loop back to work done by and for women for me to wrangle with.

The Dinner Party has limits, though. White feminism has a history of excluding women of colour, a legacy that extends into the present day. There is only one black woman at the table—abolitionist and women’s rights activist Sojourner Truth. Alice Walker has criticised the racial dynamics of the installation, saying, “It occurred to me that perhaps white women feminists, no less than white women generally, cannot imagine that black women have vaginas.” And it is dominated by anglophone culture, overlooking women from colonised Latin American countries—a point argued by Esther Allen in the New York Review of Books. It also effectively equates gender and genitalia, which can be read as an exclusion of trans women. It is important that criticism has become part of the life of the work.

In the years since I walked out into the blazing New York sunlight, awestruck after first encountering The Dinner Party and my mind racing with the questions it provoked, I have thought with it and against it. I have returned to the piece and re-evaluated it, seeing it differently each time, in a process that has been significant in marking how I have changed and how the world has changed. I sometimes fantasise about what a version made now would look like, and how different it could be.

Head to Artsy to read their latest story in the series, a piece on Jenny Saville’s Strategy 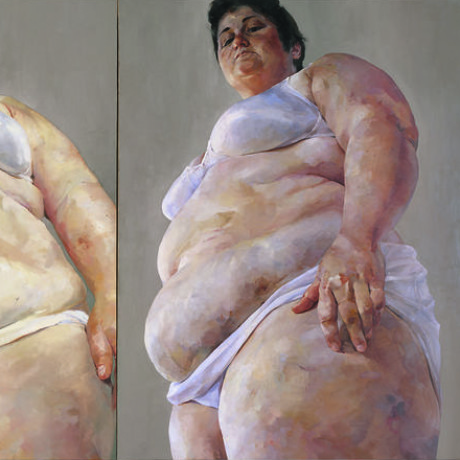