Taken by Vivian Maier in 1953, this photograph is as mysterious as the photographer herself. The rider of the horse remains unidentified, and the title, New York, gives little clue to exactly where it was taken.

Maier’s own life is shrouded in similar anonymity. Born in 1926, she worked as a nanny, but in her spare time spent four decades traipsing the streets of Chicago and her native New York, quietly and unassumingly taking tens of thousands of images that capture the unseen corners of American life, from glamorous uptown women to street pigeons and derelict buildings.

Her work remained hidden until, in the last years of her life, a huge hoard of her negatives was discovered at a thrift auction in 2007, following non-payment for her storage lockers. Her genius was soon recognised, and she is now hailed as an astounding addition to the 20th-century canon of American street photography. Her extensive archive is still being catalogued.

Maier probably took this image when she was 28, having just purchased her first professional standard Rolleiflex camera. It was a considerable step up from her original Kodak Brownie, which had only one shutter speed, no focus control, and no aperture dial.

“Against the backdrop of soda signs and raised railway line, one could almost be mistaken for thinking that horse and rider had been superimposed”

During this period, she spent much of her time around the 59th Street and 3rd Avenue elevated train as she travelled to and from the School of Modern Photography, using the imposing infrastructure as an unusual way to frame her images. Similarly bold choices can be seen in other photographs, such as her close crops of lower legs queuing at a lunch counter, or the pleasing curve of a gutter hugging a discarded copy of TIME magazine.

For Maier, this was a period of exploration and experimentation. “The best age in life is twenty-eight,” she once remarked. “You are old enough to know the ropes and stay out of trouble, you have the energy of youth, and you are unencumbered and free to explore.” 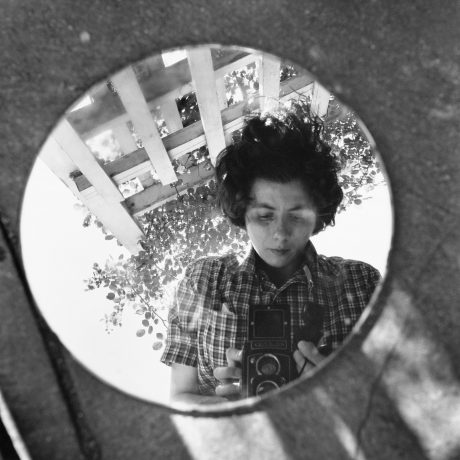