It’s Friday night, and you’re getting ready for a night out. Your friends are round at your flat, booze bottles and a fresh pack of cigarettes ready to share on the kitchen counter. The intimacy of the pre-party is rooted in its domestic setting, the familiar trinkets of everyday life situated in stark contrast to the anticipation of the glamourous night out to come. It is a moment of vulnerability and togetherness. For the Algerian transgender women who appear in Kader Attia’s The Landing Strip, a photo series taken over a two-year period at the end of the 1990s, these informal moments of connection are more than fleeting fun. Many of them are illegal immigrants and sex workers, who exist at the fringes of society, and the bonds formed in this shared space are something close to kinship.

Following a chance encounter with a member of the tight-knit Algerian transgender community in Paris, Attia—a French artist of Algerian origin—became involved with the group. Over time, he assumed the role of house photographer, snapping pictures on birthdays and other special events, as well as in the quiet familiarity of kitchens and bedrooms. A large portion of the images published in The Landing Strip were taken in shared domestic spaces on the outskirts of Paris, where various members of the group joke and laugh as they prepare for the night to come. Wandering around in various states of undress, they pour themselves a drink or pull a face at each other, playful and at ease.

Together, they enact the process of transformation into their street-ready selves. Their gender identity is fluid, malleable with makeup applied like warpaint, and shaped with a dress tight enough to need zipping up by several others. Meanwhile, the detritus of everyday life lies littered around them, a half-eaten baguette and remote control lying out on the table, shaving foam in the bathroom and a pot of tea poured for two. What Attia portrays is not just the dual sides of life—sexual fantasy and domestic reality—but the many ways in which the two intersect. One woman lies sprawled amidst her leopard print bed covers, at once fiercely provocative and unguardedly open.

Photography of the vulnerable and the marginalized runs the risk of veering into voyeurism, with subjects often given limited information on where their image could end up. There is always a palpable power imbalance between a photographer and those who they turn their lens on, and the act of taking a portrait raises questions of ownership and consent. From Mary Ellen Mark to Diane Arbus and Susan Meiselas, some of the most famous street photographers of the last fifty years, there remains the difficulty in classification between objectification and empathy. As Sean O’Hagan asked succinctly in the Guardian, “Diane Arbus: humanist or voyeur?”

It is interesting, therefore, that Attia’s Landing Strip series was presented in London this spring at Hayward Gallery alongside a major presentation of Diane Arbus’s early work. There are easy parallels to be drawn between the two artists, particularly in light of Arbus’s fascination with sex workers and transgender performers. A crucial difference lies in Attia’s active involvement with the group who he photographed for The Landing Strip, assisting them with their legal efforts to stay in France, including applications for residency papers. In doing so, he seeks genuine inclusion with his subjects rather than an assumed distance. Where many of Arbus’s performers and startled street acts appear oblivious to the camera—did she ask them before snapping?—Attia’s subjects are affirmatively present in his pictures, looking directly to the lens and striking their best pose.

These photographs are brought together as a book for the first time by Hayward Gallery, with full colour images filling each page. It is a format ideally suited to the narrative arc of the photographs, with each image offering a different perspective on some small detail of the lives captured within—from a coffee pot on the stove to the careful application of blue eyeshadow. As the book progresses, the group move beyond the intimate space of the home to the streets outside, where they cavort and strut in thigh-length boots and PVC. Marching up and down the wide boulevards that give the book its title—the landing strip is their nickname for these streets—they are illuminated by the crisp flash of the camera. Later still, they are shown in bars, holding up a frothy pint of beer to the camera or tenderly embracing.

“Attia’s subjects are affirmatively present in his pictures, looking directly to the lens and striking their best pose”

“I wanted to represent the whole picture of their lives, to show that even illegal migrants working as transgender prostitutes have moments of joy, of happiness. For me, this is about being respectful. When we represent minority communities like this one, we need to include images that do not show them as victims,” Attia explained in an interview earlier this year. In the final pages of the book, his photographs are shown hoisted on placards at street demonstrations surrounding the rights of immigrants and transgender people, breaking down any remaining boundary between the photographer and his subjects. Held aloft, they are defiant, genuine and united.

The Landing Strip by Kader Attia

Out now with Hayward Gallery Publishing 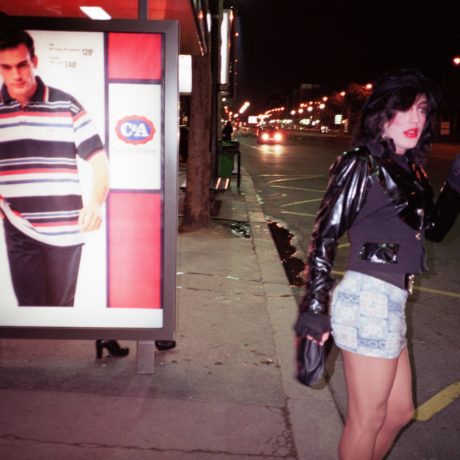