The sight of animal meat and bones is so ubiquitous that it often fails to shock. Painter Kat Lyons, however, manages to imbue fleshy carcasses with a fresh sense of horror. Until recently based on a small livestock farm in Sharon, Connecticut, her highly detailed technique and complex understanding of colour adds a surreal, nightmarish edge. It calls to mind the theatrical horror of heavy metal visuals, in which raw animal energy meets the cold thud of human-made tools.

In one work, viewers looking down on a live bull’s head can see a gooey circle of exposed brain. That animal in turn watches a fellow bull levitating in the air, with its skin flayed and body butchered at the limbs and neck. Perhaps this other bull is his future self? In another painting, intricately detailed snails slime their way over a pile of shiny grapes that resemble bloody innards.

Lyons visualises the dark violence of consumption, interrogating the ways in which animals are categorised: pet, meat, pest, prey. She also brings in questions about labour and grief, and explores how issues such as loss factor into such a practical environment.

Early Paradise, the artist’s new show at Pilar Corrias, draws on her own experiences and investigates this space as a whole, right down to the ants who are crushed under-wheel by vehicles transporting feed for the farm’s official residents.

A frog talisman I picked up from a tag sale the day I moved into my first NYC studio. I have hung it on or above the door of every studio since. I am convinced it continues to bring me safety and luck. Over the years, people have given me small charms and objects that I attach to its frame, a collection of the people I have met.

What was the last art material you bought to use in your work.?

A variety of blues from Williamsburg Oil Paints. I feel so uncomfortable with the colour, so I am trying my best to bring more of it into the work. Someday I will make a blue monochromatic painting and maybe not totally hate it.

I don’t listen to music much in the studio, at least not in the past two years. Living in a small town away from my friends in NYC, I wasn’t interacting with many people. I found myself listening to various radio platforms a lot, so many great conversations that helped me feel more social and connected to the world. I love being surrounded by conversation without the expectation to participate. I think my responses sometimes end up in the paintings.

Any work by Otto Marseus Van Schrieck. There is such a harmful history of ownership or voyeurism in naturalist depictions of the non-human world. Painting during the Dutch Golden Age, his paintings feel like an anomaly to me. They celebrate connection and complexity between lifeworlds in a way I really admire. They remind me of human curiosity and admiration that doesn’t feel threatening to its subjects.

“I miss printmaking. I love the communal setting and process”

Alexander Calder’s illustrations of Aesop’s Fables remind me to have fun. I want to make my own iteration someday. Also, Brook Hsu’s Norwegian Wood published by American Art Catalogues. Knowing her love of books, I feel it has a very special importance and that I can do it justice by dirtying its pages. And Lee Friedlander’s photographic essay Apples and Olives.

I miss printmaking. I love the communal setting and process. I have a small collection of landscape etchings that hang in my bedroom. I love their quality and character. I want to bring my work into that world.

Art handlers and workers should have better job security and pay.

There is a small fresco chapel in Madison, Maine. It felt special and secretive when I visited with friends. I doubt I will ever visit it again, but I don’t think I am supposed to. I love the memory of it.

Listen to all the go-to songs picked by our 5 Minutes With artists here. 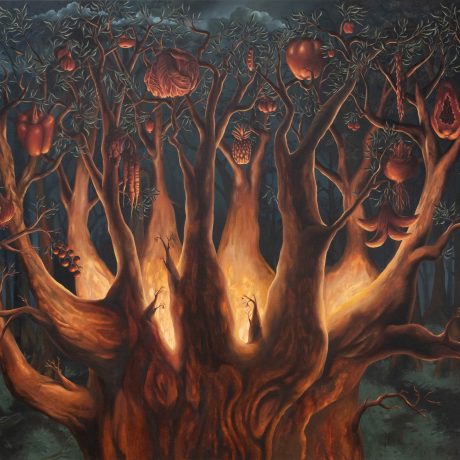