In the title sequence of Thomas Riedelsheimer’s documentary about the practice of British sculptor Andy Goldsworthy, the artist is seen dexterously to throw handfuls of dust into a ray of light to create a slanting, shimmering column. As a fitting illustration of his whole creative output, the gesture brings together life and decay into a transient image of beauty.

It has always been part of Goldsworthy’s approach to memorialize his own work—painstakingly assembled and often on the verge of collapse—in photographs, a conservation project with which Riedelsheimer’s film is continuous. This is also the second collaboration between filmmaker and artist: a previous film, Rivers and Tides – Working with Time (2001), explored Goldworthy’s philosophy about the flow of the land and his creative impulse to make structures out of ice, snow, mud, leaves or twigs.

“‘You can walk down the path,’ he says, ‘or you can walk through the hedge.'”

The intervening years have brought about some significant changes in the artist’s experience and sensibility. “I’m still trying to make sense of the world,” he says, evoking his divorce from his first wife Judith (with whom he had four children), her subsequent death, and meeting his new partner Tina and having another child with her. These aspects of life are, he says, “not uncomplicated”, and as a result his work is “not so clear anymore.”

Then again Goldsworthy is not one to choose the easy way through: “You can walk down the path,” he says, “or you can walk through the hedge.” An unforgettable sequence shows denuded hedgerows in winter. Then, with tremendous creaking sounds, the artist comes into shot, painstakingly bending branches that look too slender to support his weight and performing a sort of horizontal walk through the hedgerow.

“Ideas of death and absence are very much at the fore, but they are beautifully tied to the idea of landscape as ally and sanctuary”

Goldworthy’s fame has grown since 2001, and this new film follows him on globe-trotting commissions from Gabon to Brazil and Provence and back to Britain. It is fascinating to watch projects take their shape, whether it is simply the careful wrapping of poppy petals around the artist’s hand before immersing it in a river and releasing the petals downstream, or ambitious team efforts involving heavy machinery, such as excavating a hidden walkway between boulders or building coffin-like stone resting places in open landscape, where hikers might lie back and look at the sky.

Ideas of death and absence are very much at the fore, but they are beautifully tied to the idea of landscape as ally and sanctuary. The film—much like Goldsworthy’s own work—is a delicate and considered act. Like the rings of some ancient tree, its apparent simplicity belies the many layers of time and experience concealed within.

Leaning Against the Wind: Andy Goldsworthy

In cinemas and on demand 10 August 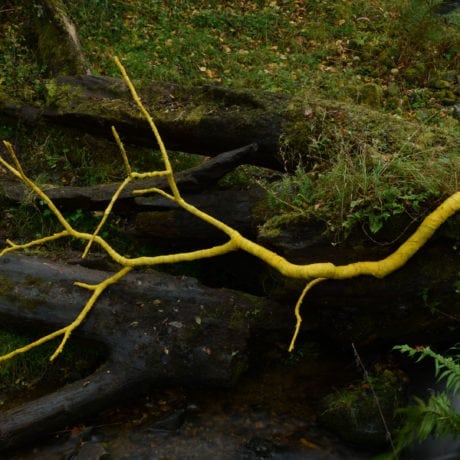