Nothing is certain in the twilight where past and present mingle, where identities are fluid and everything is dimly lit and half-known. While searching for a colour to evoke dawn, Lisa Brice found that blue—a mixture of cobalt and ultramarine—fit the bill, evoking the buzzing neon signs she associates with the early hours. And this particular hue has gone on to have other meanings for the South African-born artist, reminding her of time spent in Trinidad, where the blue devil is a formidable carnival character. In a tradition that has its origins in colonial times, revellers cover themselves in blue paint, masking their identity as they play their role amid the clamour of the procession. Beyond this transformative ability, Brice also finds the colour a useful way to “obscure naturalistic skin tones”, to stop the viewer making easy assumptions about race.

Brice’s connections to Trinidad started with a month-long residency with Peter Doig, Chris Ofili and Andy Miller in 1999. There she met the artist, poet and musician Emheyo “Embah” Bahabba who became her close friend and mentor. Brice and Embah regularly met at the Hummingbird Bar in the semi-industrial area of Laventille on studio breaks to “eat, drink and discuss art and life”. Embah passed away in 2015 and is remembered in Midday Drinking Den, After Embah I, part of a diptych that is loosely based on their old haunt. In this painting one woman sits pensively at a table, smoking a cigarette, while another peers around a column in the shadows and a third—painted in Brice’s signature blue—turns, challenging our intrusion, while lifting her buttocks provocatively. Are these women simply wiling away the hottest part of the day, or are they waiting for something? The back of a billboard is visible through the open doorway, and it is clear that this bar is on the outskirts of town.

Before knowing the backstory, I misunderstand the location. Are these women in a brothel? I ask. I am corrected. “None of my compositions are brothel scenes in my mind, but as they are left open to interpretation, it is increasingly interesting to me that a group of scantily clad feminine figures are frequently presumed to be prostitutes.” I may have jumped to the wrong conclusion, but Brice admits that the art historical precedence is there. Take Édouard Manet’s Olympia (1863), a painting of a pale courtesan which was based on Titian’s Venus of Urbino (c1538) and which scandalized French society.

Manet made no attempt to seductively soften the edges of his lithe model, or to dress her up as a classical nude. She does not turn her head or cast her eyes down modestly, rather she stares right back at us, businesslike and unflinching. Behind her a black woman delivers a bunch of flowers, gifted by an admirer, and at her feet a cat arches its back, a witty reference to her sexuality. Brice often uses cats in her work. “A hissing cat positioned in a composition can confront the viewer in interesting ways, by interrupting the easy flow of a potentially voyeuristic gaze,” she tells me.

Manet’s Olympia influenced Félix Vallotton’s striking image The Black and the White (1913) in which a naked white woman reclines languidly on a bed, while a black woman dressed in green sits next to her with a cigarette in her mouth. The two are looking at each other, but their relationship is difficult to decipher. Brice uses the figure of this seated woman several times her work, drawn to Vallotton’s depiction because it “challenges the conventional ethnic power play previously depicted in art-historical figurative painting”.

“Her state of half-dress now an act of defiance, rather than a symbol of vulnerability”

Brice also aims to complicate the reading of gender in her work. Speaking to curator Aïcha Mehrez she described painting a female figure who was in fact based on the personality of a male friend. This interest in fluid identities also attracted her to a painting in Tate’s collection. William Rothenstein’s Parting at Morning (1891) depicts a pale woman who stands half-clothed, with arms limp by her side. She is modelled on an acquaintance that the artist described as having a “cadaverous beauty.” But it was the androgynous nature of this woman that attracted Brice. “I was drawn to the figure’s attitude,” she tells me, “and the ambiguity of its gender, as well as the flatness of the gold background, empty but full of associations.” Brice’s version takes no prisoners. She looks out at the viewer with narrowed eyes, a smoking cigarette between her thin lips, her state of half-dress now an act of defiance, rather than a symbol of vulnerability. She has been transformed, possessed by a power she lacked in Rothenstein’s image.

Brice’s paintings offer tantalizing hints of narrative too. Through doorways and grilles we glimpse other rooms and exteriors worlds. Her re-imagining of John Everett Millais’s Ophelia (1852) shows such a space. A naked woman painted in blue walks through a rainbow-coloured strip curtain, a cigarette in one hand, a beer bottle in the other. The gesture of the out-turned hands is what recalls the Millais painting, but this woman is not a drowned romantic victim, rather she is self-possessed, and, well, alive. And, at her feet, a triumphant cat carries the body of a dead rat, like an extension of its mistress, a sort of avatar, perhaps.

There is no vulnerability here, and where a deathly pallor colours the women in Manet, Millais and Rothenstein’s paintings, Brice’s are imbued with an almost supernatural life force. They are the masters of their destiny, not the meek recipients of the onlooker’s gaze—instead they scrutinize us, or ignore us altogether. “They are,” Brice says, “self-contained, performing for themselves or one another. Their own pleasure is paramount.”

Until 27 August at Tate Britian 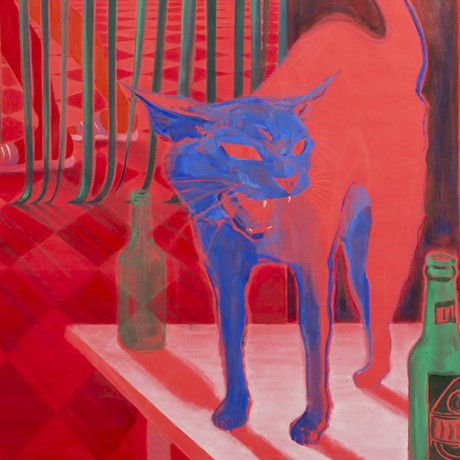