In what can only really be termed an epic moving wallpaper, Lisa Reihana’s In Pursuit of Venus [Infected] is such a grand work of art that it warrants several repeat viewings. The first time I encountered this mesmeric piece, which chronicles Captain Cook’s arrival on New Zealand and Pacific Island shores, was at the nation’s pavilion at the 2016 Venice Biennale, where the proximity to water heightened the allusions to sea voyaging. Unfortunately, a tour around that epic art show allows little time for intense contemplation, so it is no wonder that so many people have now flocked to the Royal Academy’s survey exhibition Oceania, with the sole intent of experiencing Reihana’s film.

For the artist, this new environment is extremely valuable, and holds personal resonance: “The greater Oceanic context is really interesting, because its 250 years since Captain Cook departed on his voyage, and different aspects become important to different people. Venice is of course a very nationalistic set up, especially the Arsenale, which is built on the age of empire. But here, I’m engaging with both sides of my heritage, as a person of Maori ancestry but also with a mother who is English and Welsh.”

The work, which runs at just under an hour, was originally inspired by Les Sauvages de la Mer Pacifique, a scenic wallpaper conceived by painter and artist Jean-Gabriel Charvet. It depicted an exoticized view of native communities across the Pacific and was considered to be an aesthetic and technical marvel.
Tweet this

“I had to develop a new filmic language, there are no cuts, no editing, which is one of the reasons that I think people want to continue looking”

In Reihana’s contemporary version, she wanted to invoke the same sense of marvel. Her aesthetic language (which combined static illustration with IRL filming) is informed by Charvet’s prints, but in her interpretation the entire world becomes a living, breathing entity through a complex choreograph of moving elements, which offer glimpses into the stories and experiences of indigenous people and voyagers alike, building a vibrant tapestry that evokes a sense of wonder and intrigue on both sides.

“I had to develop a new filmic language,” explains Reihana. “There are no cuts, no editing, which is one of the reasons that I think people want to continue looking. I never wanted to cut that line—that history.” This sense of a cyclical narrative is actually more embedded than you might think, because the film comprises two versions presented back to back, with the character of Captain Cook played by both a man and a woman. “I wanted to play with gender, specifically because a lot of Pacific people first considered Captain Cook as something like a god, because of the craft he arrived on. Also, he appeared gender non-specific, because he wore britches they couldn’t see his genitals, and women could be leaders in the indigenous community anyway.”

By queering this history, Reihana offers new ways of addressing a narrative focused on hostile binaries and presents her subjects not as ignorant oppressor and subjugated native, but as a nuanced collective. The crescendos of her soundtrack, which includes hypnotic indigenous songs and the barking commands of British officers, adds to the reciprocal sense of wonder and exchange that her actors convey, before eventually descending into the anticipated violence.

An officer fastidiously records the colours of a fish, while Cook attempts to ingratiate himself with local chiefs and encourages his crew to do the same with ample amounts of rum. Likewise, an indigenous woman attempts to explain the significance of sacred objects, while an elder administers medicine to a sickly crew member.

There is also an incredible sensuality within this work, which explores a mutual attraction between both parties, informed by the accounts Reihana uncovered in her exhaustive research. “Reading things on the page is different, but when you give something to an actor, and they absorb it into their body and show it back to you, you understand things so differently. It’s not an academic process, it’s actually very emotional. It’s all about how these individuals were simply trying to understand what the hell was going on.”

Until 10 December at the Royal Academy, London 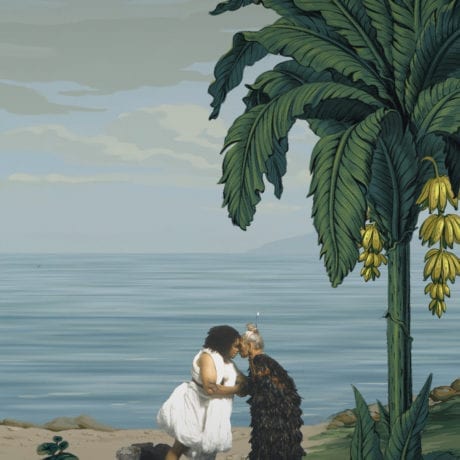