Are many topics more taboo in contemporary culture than elderly sexuality? It’s a subject few artists (especially younger ones) seem to want to think about, let alone visualise. However, in Lola Keyezua’s latest body of work, Never Too Old To Cut The Banana When Erected (at Galerie Bart in the Netherlands) older women’s sexual experiences take centre stage.

Keyezua is a photo-based artist interested in liberating bodies from oppressive societal norms. In her series Stone Orgasms (2015), she dealt with female genital mutilation (still commonly practiced in her homeland, Angola), while in her riveting series Fortia, comprised of a performance and photography, she explores disability. The latter was inspired by her late father, who had had both legs amputated.

In this new work (a series of performative photographs and a short film), Keyezua celebrates female sexuality from the perspective of an elderly protagonist, her grandmother. Surprising in its directness and refreshing in its lightness, the photographs show a woman posing sensually, suggestively, with a banana she has cut from a bunch. There’s no doubt she is in control of this symbolic fruit, a none-too-subtle stand-in for the phallus.

“Typecast as either the sweet grandmother or the doddery old maid, they always remain sexless stereotypes”

The series, like Fortia (2017), was informed by the artist’s observations of her family. In a poem (also reproduced for the exhibition), she writes of watching her 80-something grandmother Margarida flirting, describing how she would “play with her afro to seduce the reverend”.

Observing her grandmother prompted Keyezua to think about the way older women’s sexuality and pleasure is portrayed in contemporary culture: typecast as either the sweet grandmother or the doddery old maid, they always remain sexless stereotypes, and their very real physical desires and needs are often avoided or treated with shame and disgust. These attitudes seem to be bound up with prevalent ideas about female beauty and sexuality as intrinsically youthful qualities.

The effects of repressing sexuality later in life, however, can be damaging. Keyezua also witnesses how being denied pleasure and companionship has a detrimental effect on her grandmother’s mental health and wellbeing. It’s referenced in a two-minute video, a montage of footage Keyezua shot of her grandmother in Angola. The film shows Margarida alone, dancing, singing, planting and eating bananas, recounting stories of lovers, both real and imagined.

The barren landscape around her feels particularly poignant: the film ending with her eating a banana and meeting her granddaughter’s gaze. It’s a deeply personal exchange between the pair about what it means to be a woman, to love and to lose, and it speaks to the way culture, religion and society infringe on our right to be free within our bodies, to express our sexuality and inner desires, as women.

The exhibition at Galerie Bart also included an installation of bananas, slowly ripening from green to brown, with an open invitation to every visitor to pluck their own, a reminder, not without a knowing wink, that “you are never too old to cut the banana when it is erected.”

Lola Keyezua, Never Too Old To Cut The Banana When Erected 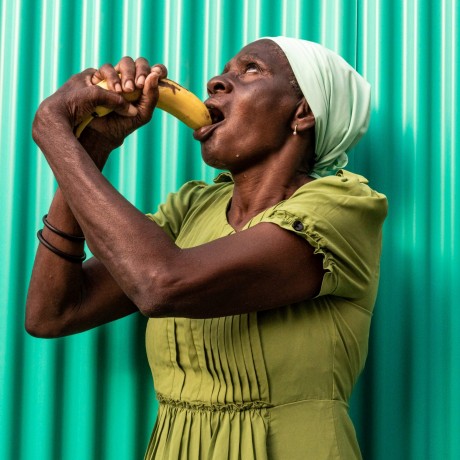