The Balogun market on Lagos Island is much more than a market: it’s a huge, sprawling, heaving ecosystem. Looming above it is the imposing twenty-seven storey Financial Trust House, once an illustrious base for western conglomerates, corporations and banks—and now unoccupied.

Money Must Be Made is Lorenzo Vitturi’s latest project on Balogun, released as both a sumptuous book and presented as a solo exhibition at Flowers Gallery in London from 11 May. The work presents a rare example of a place where local, independent business is thriving and has forced global organizations out.

Vitturi first travelled to Nigeria to exhibit Dalston Anatomy—his 2014 project documenting the inverse situation of Balogun in east London––with the African Artists’ Foundation, which led to a residency in the city. “I didn’t know Lagos at all, so I started to do some research and, quite randomly, I found this incredible story in Balogun market, which is at the centre of a neighbourhood called Lagos Island, in one of the oldest parts of the city.”

The pictures Vitturi shot vibrate with the energy of the Balogun community and trade: full of colours, shapes, textures, sounds and movement. They are static images, but they punch every sense. In the middle of the publication, as in the middle of the market, there are photographs of the desolate Financial Trust House. With both abstract portraits and still lifes, the idea was to “recreate, as exactly as possible, the geography of the Balogun market and the contrast between the market and the Financial Trust House”.

To compound this, Vitturi also chose different paper stocks for both the publication and exhibition, to reflect the feel of the environments. “In the exhibition at Flowers Gallery, the images that are made within the Financial Trust House are printed on a cotton-based matte paper, with a thick textured surface that reminds you of the sandy textures within the building. The images of the market are on a type of fine art paper, which is glossier.” This material approach to his photography is a distinctive part of Vitturi’s process.

Vitturi lived in east London for seven years, so there is an immediate contrast between the natural genesis of Dalston Anatomy and this new body of work. As a white European photographer and an outsider in Lagos, one of Vitturi’s concerns was to address his own position and eye on the city, to eschew negative stereotypes or the over-exoticization of African cultures and bodies. “When I arrived in Lagos I found something very different from the drama that the western media tends to depict.” Vitturi explains. “The idea behind my collaboration with the African Artists’ Foundation is to try and find other ways of representing life in Africa and Lagos.”

Working with curator Azu Nwagbogu, Vitturi tried to find a different, non-exploitative approach to portraying Nigeria for both local and foreign viewers. “I always pay the people that I work with––every person that you see in the photographs is paid for their work. I also engaged in collaborations with local artisans. For example, I collaborated with a calligrapher who did all of the flags that you can see in the book, then also with a writer who produced the text. These collaborations with local people were also a good way to enter and discover a new culture. It was still difficult to get around the issue of the role of a white western photographer in Lagos, and it’s not that I found any real solutions, but in a way, this book sets out to uncover these issues and confront them.”

This also informed the way Vitturi decided to shoot the people of the community: “In the portraits, I usually don’t show faces––the human presence is always covered, and instead I represent the person covered with objects.”

The still life pictures meanwhile reflect the way market vendors position their goods vertically, to stand out in a packed crowd. In a city of twenty million people, every single centimetre is used to its full potential. “Here, I found a strong connection to what I do in my studio. It might appear really chaotic and without order, but it is a different kind of order that works perfectly for the Lagos environment––in that way, it is totally functional.”

“I was fascinated by the creative ways people find to continually reinvent how they present their products to the crowd in the street every day, and I felt really connected to the very different aesthetic in all the markets and shops. Every ten minutes I would find random installations made by people in the street.” Some of these are recorded in the book.

The crowds also presented a few issues when shooting at Balogun, which shaped the aesthetic of the photographs. “It was not a very easy environment to photograph in because the street was so crowded!” the artist recalls. Setting up an outdoor studio at the neighbouring, abandoned Financial Trust House, Vitturi was able to build sets and compose portraits with the time and space he needed. “It is really impossible to photograph anything and anyone within the market. That’s why I photographed the market from above, from the viewpoint of the Financial Trust House in the centre of the market.”

Growing up in Italy with a Peruvian mother and Venetian father, it’s no surprise that Vitturi is drawn to places where cultures cross-pollinate. Money Must Be Made is a symphony of colours, a reflection of the life force that keeps moving and adapting. “I think it’s evident in the work that it’s a celebration of Lagos and the market; I was really attracted to the reality of life there.”

Money Must be Made has been published as a book by SPBH Editions, with texts by Emmanuel Iduma. All images © Lorenzo Vitturi, courtesy of Flowers Gallery

Lorenzo Vitturi, Money Must be Made

11 May to 30 June at Flowers Gallery, London 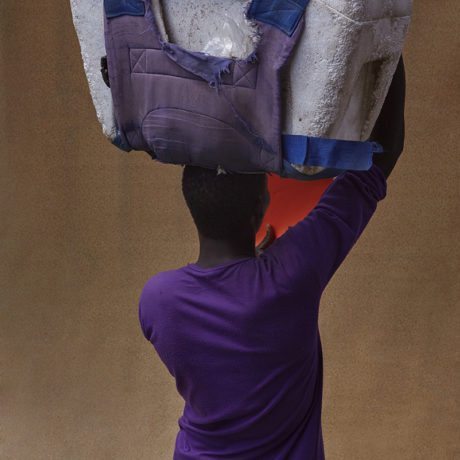