Ecstasy is white hot, a fleeting moment of euphoria, a sensation like no other. The word denotes a pleasure not quite out-of-body, but undeniably untethered. It provides an apparent weightlessness, an ebb before the flow. Ecstasy lives above everyday physical awareness, releasing the anchors of body, thought, even identity. It can feel like rising over the tides for a second before being pushed back in. It is atemporal, far from self-awareness, a chance to focus by not focusing at all. You don’t just find it on dancefloors. It can be sought out anywhere: bedrooms, meditation, churches.

The word’s origin is in the ancient Greek term ékstasis, meaning “outside of oneself.” What exactly is on the outside? If ecstasy exists outside of a self, where do these moments exist when compiled, connected, networked? Is there a collective web of ecstasy that we tap into? Where are we going in these moments?

In Notes Towards Becoming A Spill, the artist and filmmaker Shikeith imagines the psychic space in which these questions play out, a collection of photographic moments where queer Black masculinity is safe and free. His portraits depict Black men in dreamlike, endless, hypnotic states: eyes closed, untensed, sweat beaded across face and body. The photographs evoke daydreaming, dirty memories on hot days, moments long passed but still on the mind. The Philadelphia-born artist is on a hunt for ecstasy, wanting to understand it, capture it, play in it. The camera becomes his tool of choice: a faster-than-thought, spring-loaded trap capturing the feeling before the mind even notices.

Spillage is Shikeith’s metaphor for queerness. He positions it as a “glitch”, an unexpected, inescapable spillage that, once accepted, can become vindication. Water, sweat, and other bodily fluids become anointing liquids, denoting comfortable flow and ease. Spillage creates possibility, sweat and tears signifying an unseen stage on which physical activity has already occurred.

“Shikeith positions spillage as a ‘glitch’, an unexpected, inescapable spillage that, once accepted, can become vindication”

The flipside of these ecstatic moments is a fleshy vulnerability: eyes closed, heart open, where one can become an easy target. Shikeith bears his own heart, opening the book with recounts of childhood: memories of church, queer awakenings, and a concealment of his true self. Queer Black men do not often get many chances to let their guard down. Notes Towards Becoming A Spill provides some. Here they indulge in meditative moments in peace. Unbothered, untethered.

Shikeith tells a very specific story, one that straddles the complicated, interconnected words of queer Black masculinity and the African American church. He shows that ecstasy can be found anywhere, with many first encountering it within places of worship. The artist looks back into his own Pentecostal history, fusing it with a now fully realised Black and queer perspective.

“Shikeith imagines the psychic space in which these questions play out, photographic moments where queer Black masculinity is safe and free”

In one image, a subject clings to an unseen man, and another behind. The embrace could be one of loving acceptance, or cleansing deliverance. Holding a loved one, or casting the devil out. This male-on-male touch is regulated, each connection fitting into a wider rulebook of “correct” and “proper” Christian interactions. Despite this, the capacity for queer desire is far from quenched, instead poured over in tension. Desperation emerges from religion: a need for connection, a need to be held.

Christian imagery flows throughout the book, bringing a holy understanding to the erotic, an awareness that childhood memories of church, sexual repression, and hidden emotions never truly leave us, instead become spillages themselves. It might seem fitting to imagine Christian (especially Pentecostal) practices as inherently anti-queer, restrictive, and absolute. But Shikeith questions this, indulging in the fun that can be had when the two camps meet. What happens when the quaking body, devoted to an almighty power, is seen through the lens of gay sex? What happens when the same gay sex is revered and adored, a physical manifestation of unearthly, even holy, desires?

Religious ecstasy, arguably in a similar fashion to its erotic counterpart, connects the self to something wider, bigger, and sensorial. Quakers get their name due to “quaking”: they quite literally shake under the influence of the Holy Spirit. In the 16th century, Saint Teresa of Ávila described her religious epiphanies as a piercing of the heart, a “complete transformation of the soul in God.” These transfigurative sensations demonstrate the absolute love of God, one Shikeith ties to the absolute love of queerness. At its heart, Notes Towards Becoming A Spill is a story of healing on a biblical level. Tears become sweat, desire becomes fulfilment, isolation becomes connection.

Notes Towards Becoming A Spill acts as exorcism, allowing each aspect of queer Black Christian life to let loose: to rise, flow and spill into one another. To quote Shikeith’s closing manifesto, “The edges of my shadow stretch out to hold each other, their edges becoming illegible, dissolving in the centre… It is a marvellous act to become malleable, unable to be contained or policed, just spreading profusely.”

Isaac Huxtable is a writer, currently working as programme assistant at The Photographers’ Gallery, London 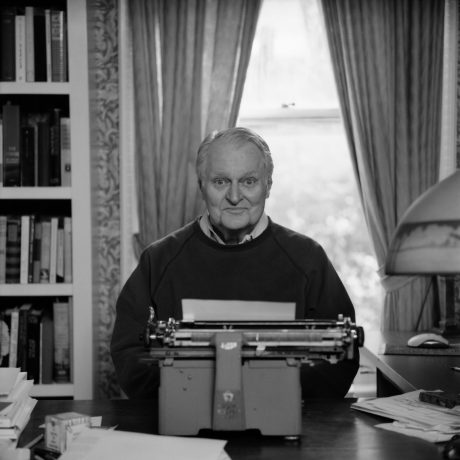