When Donovan sang that it must be the season of the witch in 1966, he could not have known just how prescient his words would be. Fast forwards to 2019, and witchcraft has been embraced by pop culture. A remake of Dario Argento’s Suspiria was released last year, while Charmed and Sabrina the Teenage Witch have also been rebooted, and astrology apps are everywhere. In the art world, spiritualist figures like Hilma af Klint and Emma Kunz have received renewed attention.

For German artist and illustrator Malwine Stauss, the witch offers a feminist symbol of resistance. Her latest project, Hexen, draws a connection between the so-called witches who were ostracized throughout history, and those female artists who struggled to gain recognition during their lifetime. Women are recast as mythical creatures with magic powers, reclaiming their own agency in a female-dominated world. It is a land of vivid colours and distinctly graphic shapes, carving out an emotional space for pleasure, experimentation and escape.

What is the story behind your new book Hexen? Why did you create it, and how does it explore witches and the occult?

The book “Hexen”, which is the German word for witches, was my diploma project. I studied at the Academy of Fine Arts in Leipzig, Germany. I was often confronted with criticism about my work being too decorative and superficial, especially coming from the male professors that I had. I was almost exclusively taught by male professors at the Academy, as there is an imbalance of ninety to ten per cent between male and female professors in the graphic design department. So, for me, there were a lot of frustrating moments and incidents, and also the fear of not being taken seriously as an artist or designer for making “female art”, during my studies. I also realized that, at times, I had to explain and defend myself more than my fellow male students.

When I started the diploma project, I decided to explore the reception for women in the history of art—I feel that I stand at the end of that historical line of reception. I soon came across the spiritist painters of the nineteenth and twentieth century, like Hilma af Klint, Emma Kunz or Georgiana Houghton. I was interested in the stories of these women who made amazing artworks but were never even recognized as artists during their lifetime. They were not taking seriously for trying to explore the supernatural, and for connecting abstract and figurative arts.

Once again, I felt so frustrated by how much the art and design world has always been, and still is, so dominated and managed by men, for men. I decided to collect these thoughts and put them into a book in a way that felt positive and self-conscious. My attempt to make the book started out very personal but ended up quite general, touching not only my own story but many stories of women and female artists. During my research, I soon came across Silvia Federici’s book, Caliban and the Witch, which investigates the figure of the witch and the history of how female self-determination has been received. The book inspired me to explore the figure of the witch, connecting her to other topics that interest me.

“I like to connect the traditional figure of the witch, the female spiritist painters and the modern female artist: all of them use magic in different ways“ 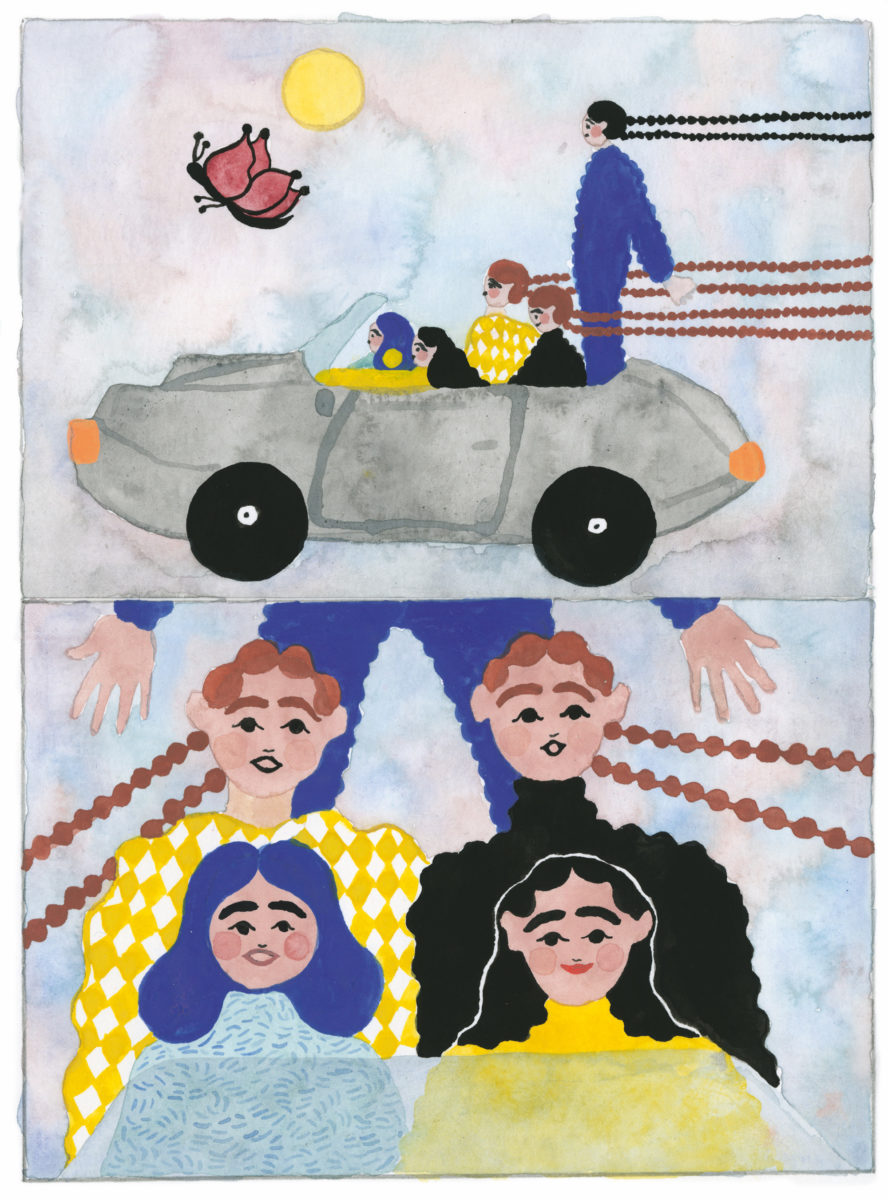 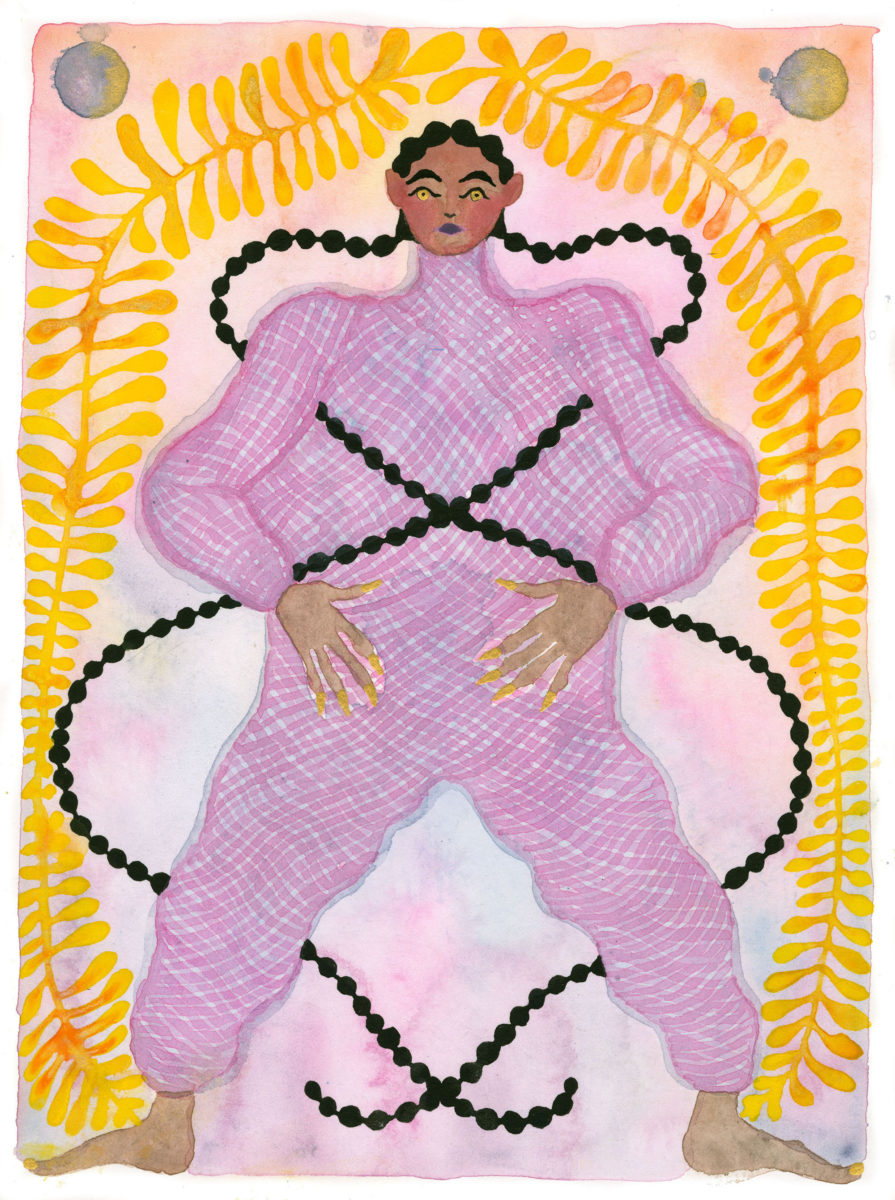 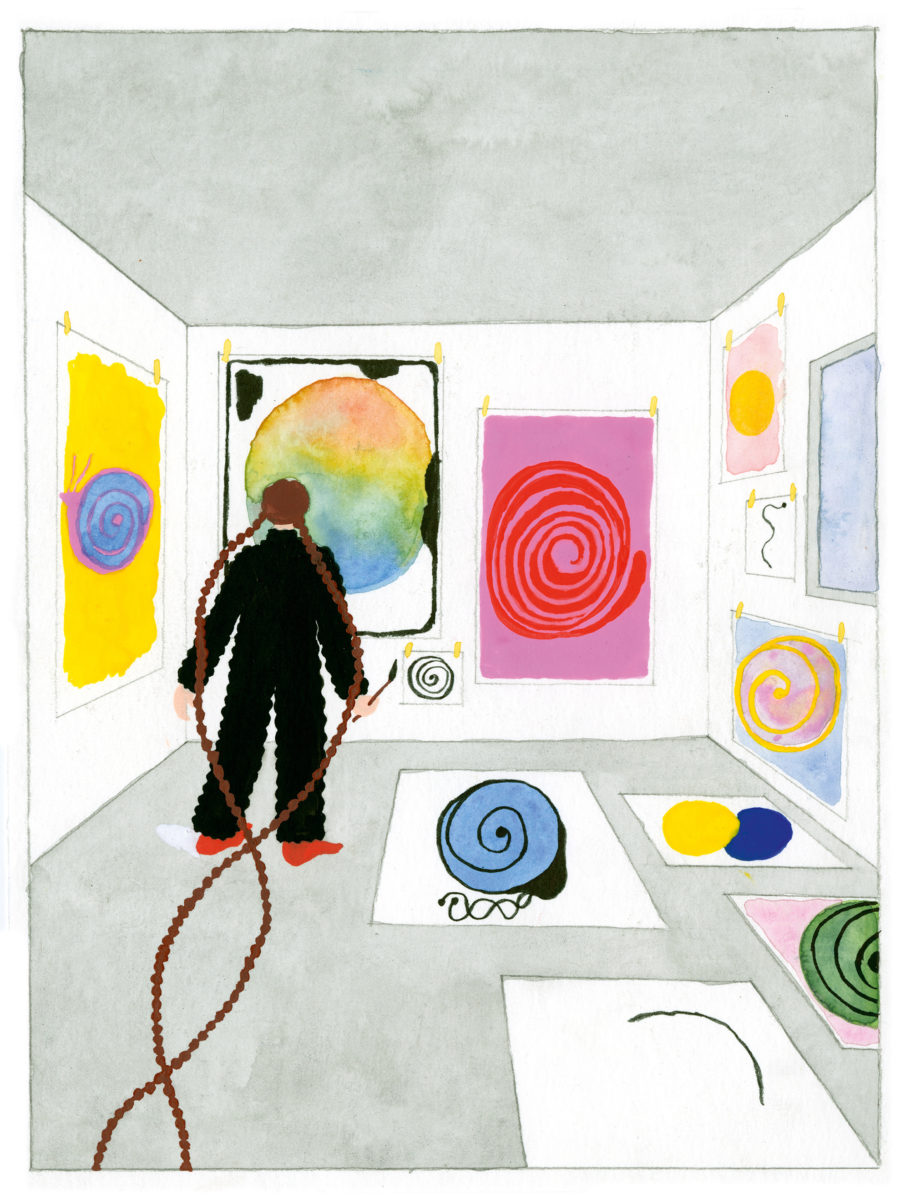 How important are female characters to your work, and how do you relate to them as a female artist and illustrator?

Female characters are very important in my work. For me, the female artist is interesting as a character because there is less cliché or template regarding how female artists ought to behave, look or live than there is for male artists. The role of the female artist in society is not as fixed as it is for men. There is not really this role that she can take to be an artist, so she has the opportunity to build this role for herself. I like to think of today’s witch as a female artist or as any person that’s living self-determined, just like the traditional witch in history and mythology.

In the final chapter of my book, the readers are visiting the witch in her studio, which is located in a big brutalist building. All that she paints is cosmic snails. I took the idea of the cosmic snail from Hilma af Klint. It symbolizes unity and the overcoming of differences that separate us; the snail is a hermaphrodite, which means that it is male and female at the same time. I like to connect the traditional figure of the witch, the female spiritist painters and the modern female artist: all of them use magic in different ways.

Many of the women in your work have very long plaits and wear unusual body suits. What informed the appearance of these characters? Is fashion and personal style something that interests you?

I see the women and the witches in my work as normal people—like me, my friends and family. What makes them magical is their strength and belief in themselves, their strong friendships, love and care and the space they are creating for each other. This is what gives them supernatural powers. I like to symbolize these powers with the magical long plaits and the outfits. The plaits and body suits have a life of their own and are filled with energy.

I feel very connected to the people in my paintings, almost like I am one of them. I’m trying to visualize this feeling of connection. I’m also painting the outfits and hair styles that I would like to wear, and that I am dreaming of. I would love to have one of these body suits. I like fashion as an opportunity to care for oneself and to show oneself to the world.

Modern technology, such as mobile phones, appear at times in your images. What is your experience of working with the traditional mediums of painting and drawing in the internet age, and how does this shape your work?

The witches in my book connect through their mobile phones, so they can meet up and be together. I grew up in the internet age, so I have no comparison to a time without internet and modern technology. I am very used to being virtually connected all the time. I have the opportunity to show a picture right after I made it, or whenever I want to. I’m also used to seeing images from all over the world, whenever I want to. My work is influenced by a lot of things that I see or read online.

I think traditional drawing and painting are quite lonely activities, but modern technologies make worldwide exhibition and fast communication possible. Most of my works have a small format, but online all of the pictures appear at the same size. Sometimes, when people encounter my work in real life for the first time they can be surprised; they imagined the pictures to be a lot bigger having only seen them online. That makes me curious, and I think I will try painting in larger formats soon.

“With my painting I’m often trying to transform my thoughts and also my fears, insecurities or frustrations into something that gives strength” 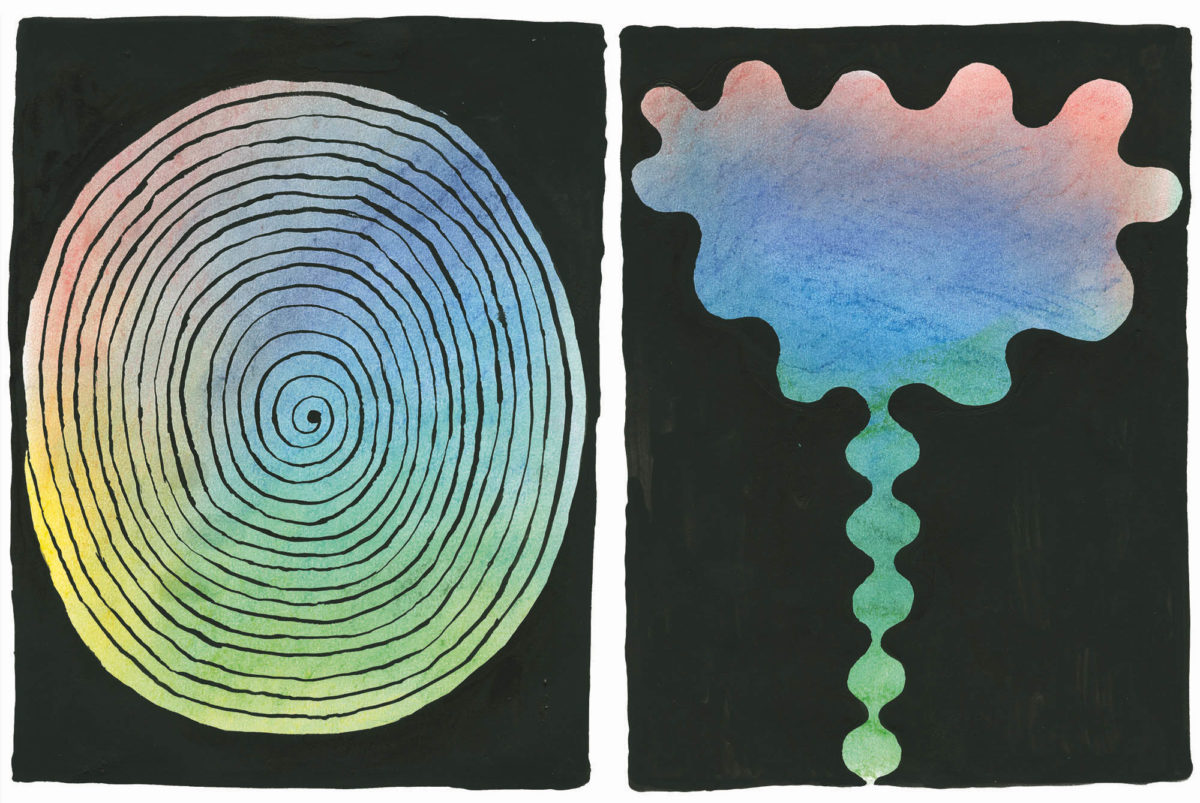 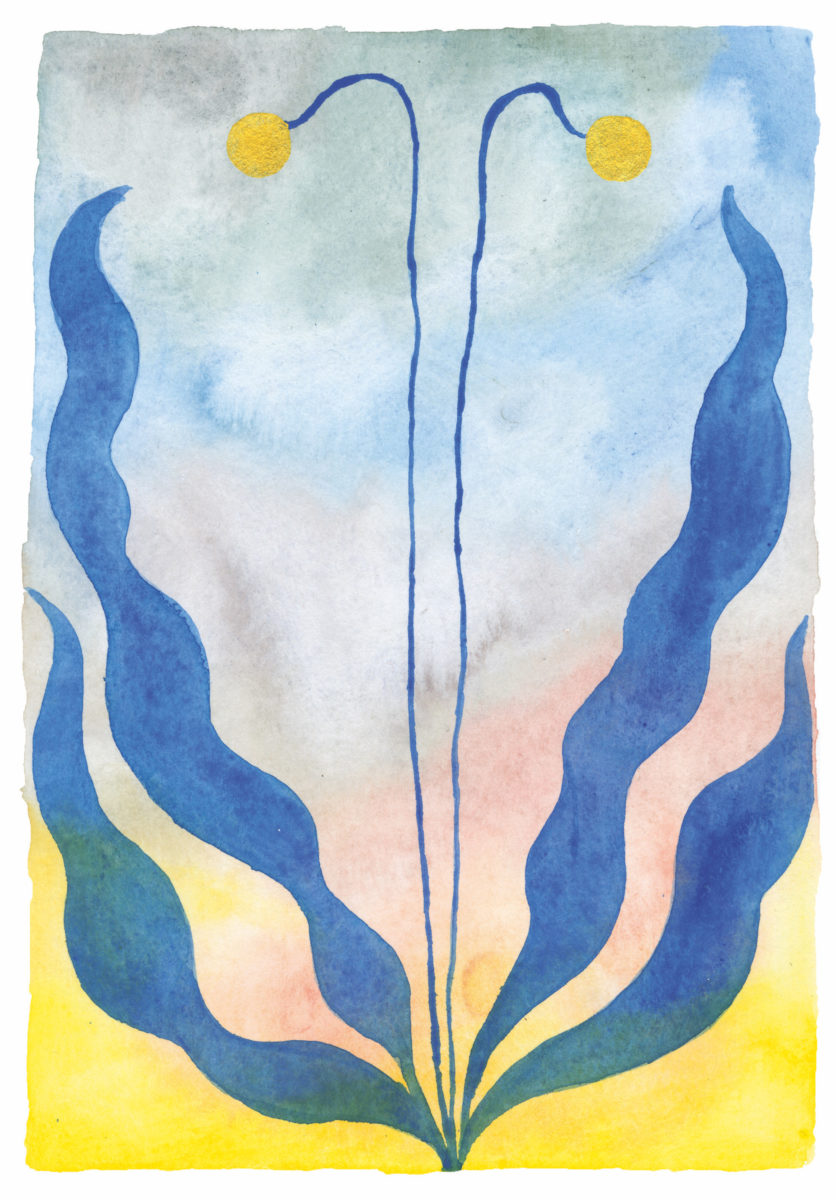 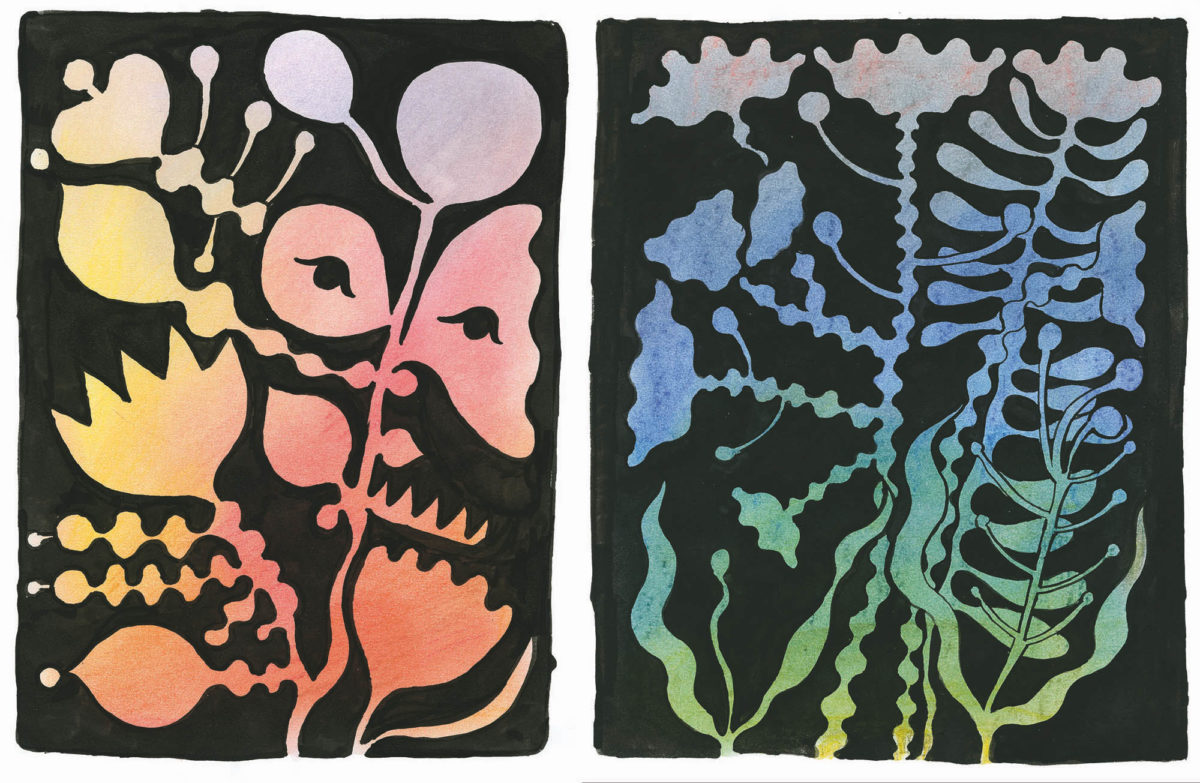 What influences the bright colours and strong graphic shapes that you use, and what mood do you want to evoke with them?

I like using a lot of decorative elements, and colourful patterns, plants and flowers reappear in many of my paintings. With my painting I’m often trying to transform my thoughts and also my fears, insecurities or frustrations into something that is happy, powerful and gives strength. I like to create this colourful, emotional space in my paintings. I like to think of colours and shapes as a story or a place that I, and people looking at my work, can dive into. I want to create a place that feels hopeful. 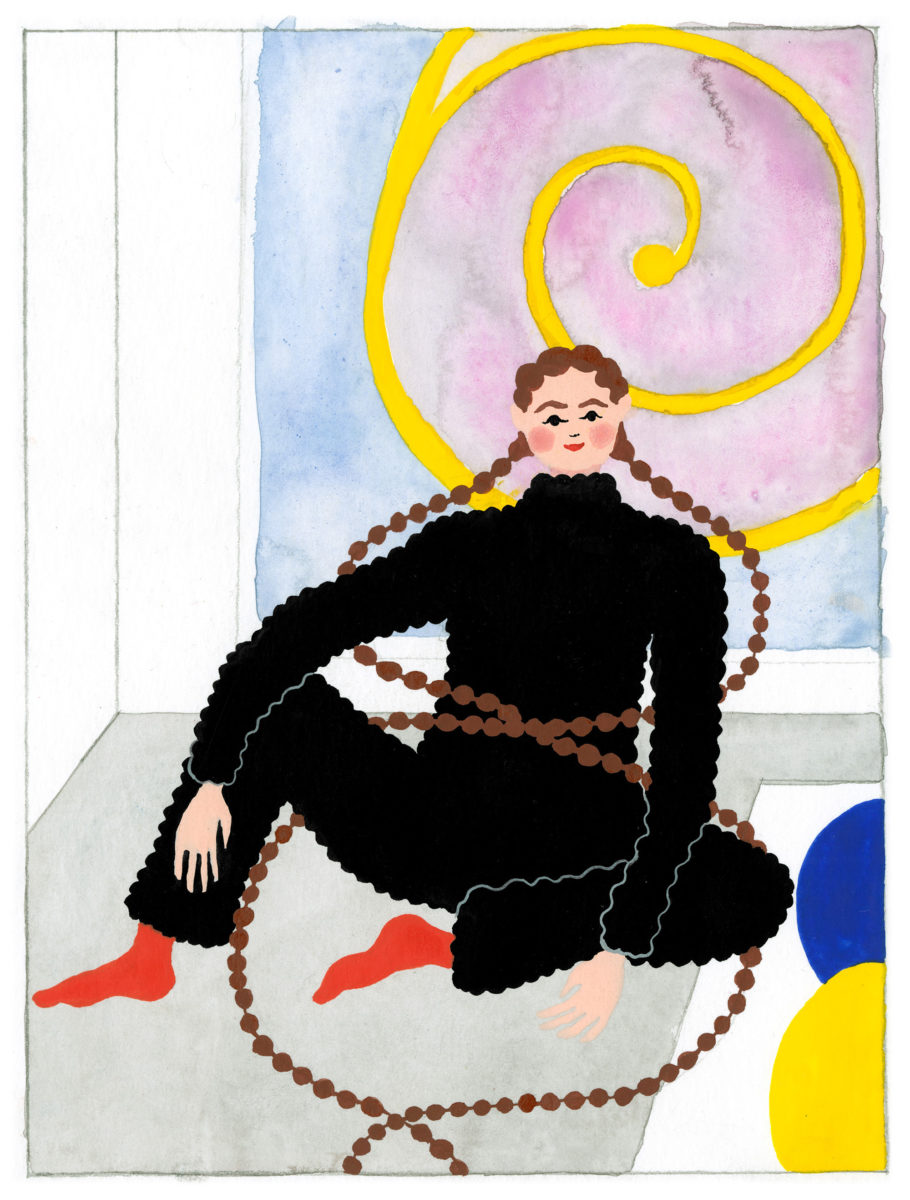 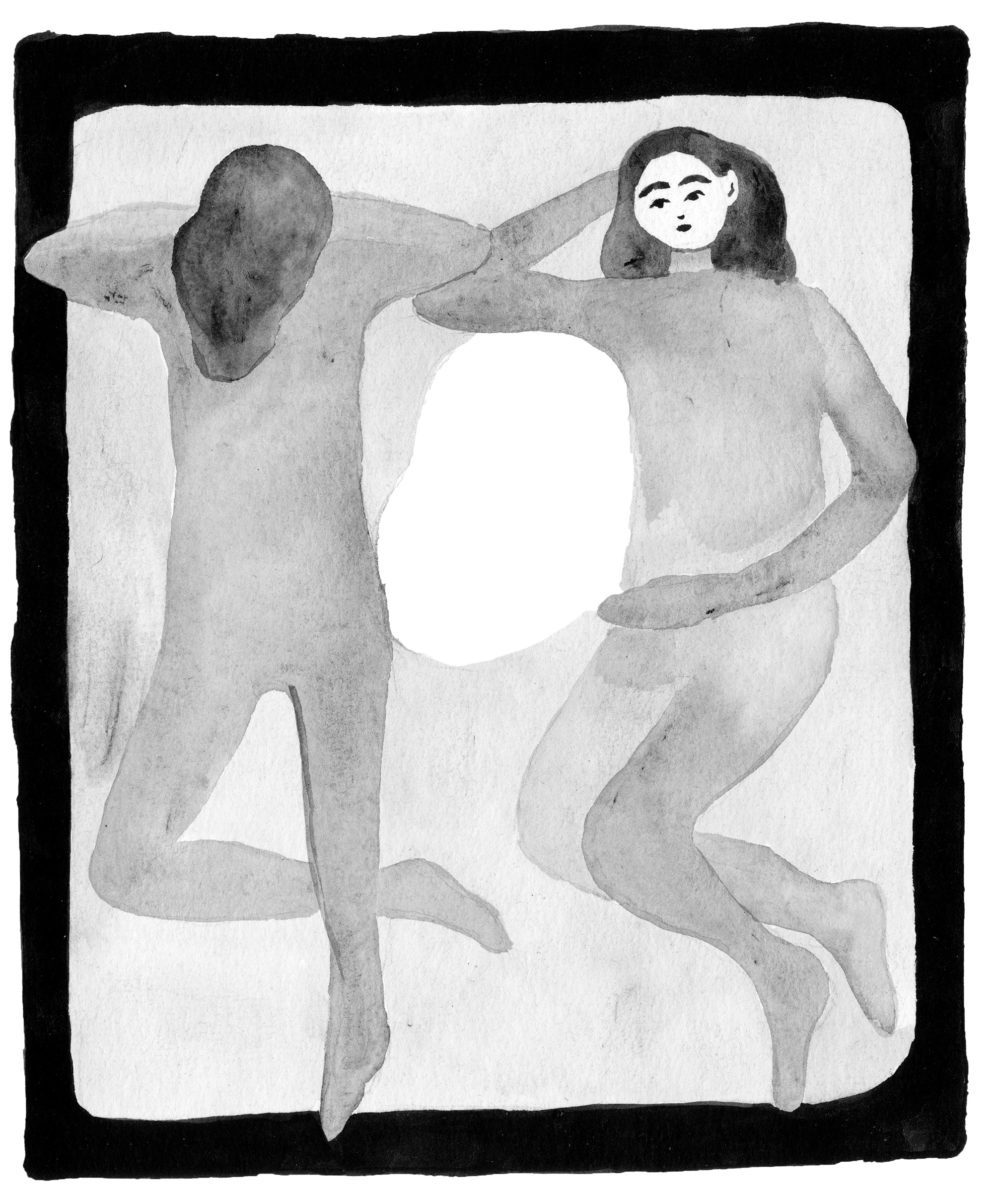 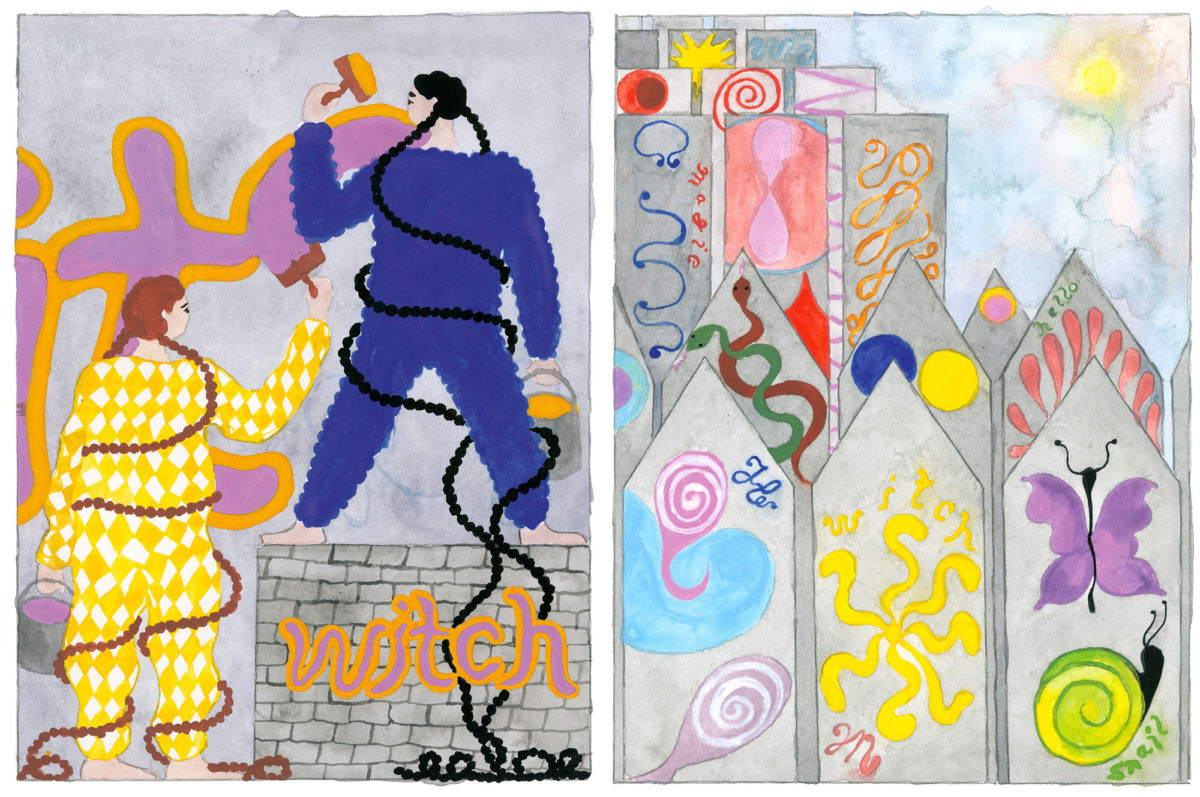 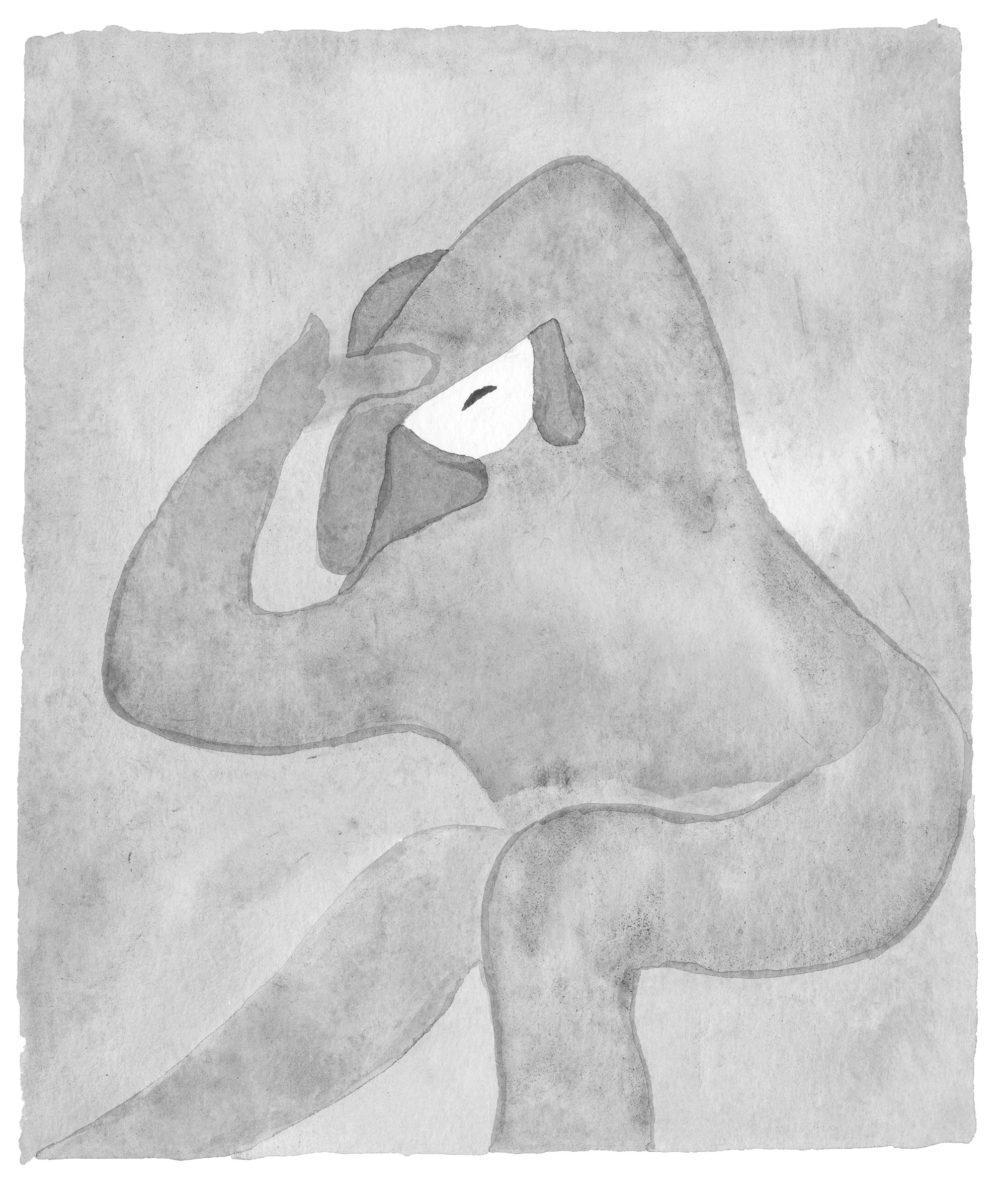 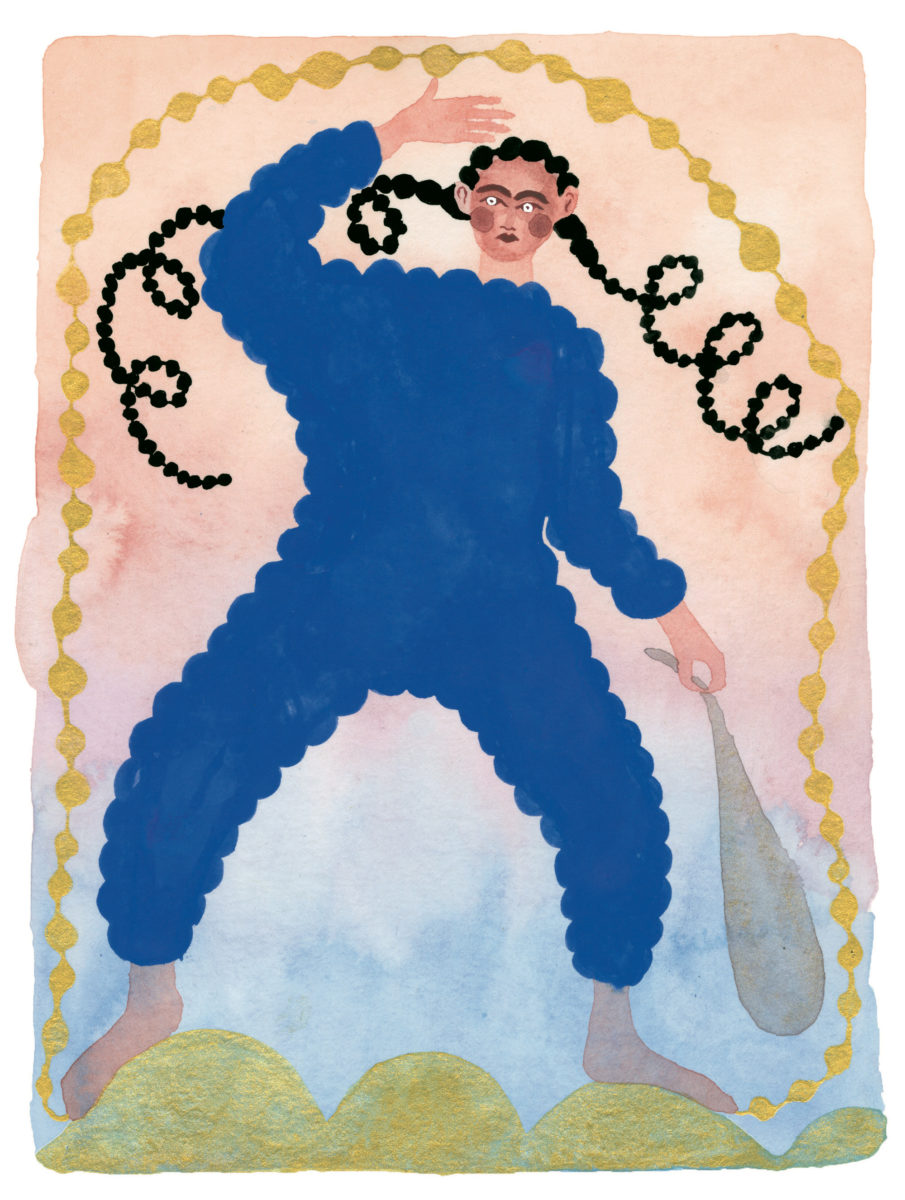 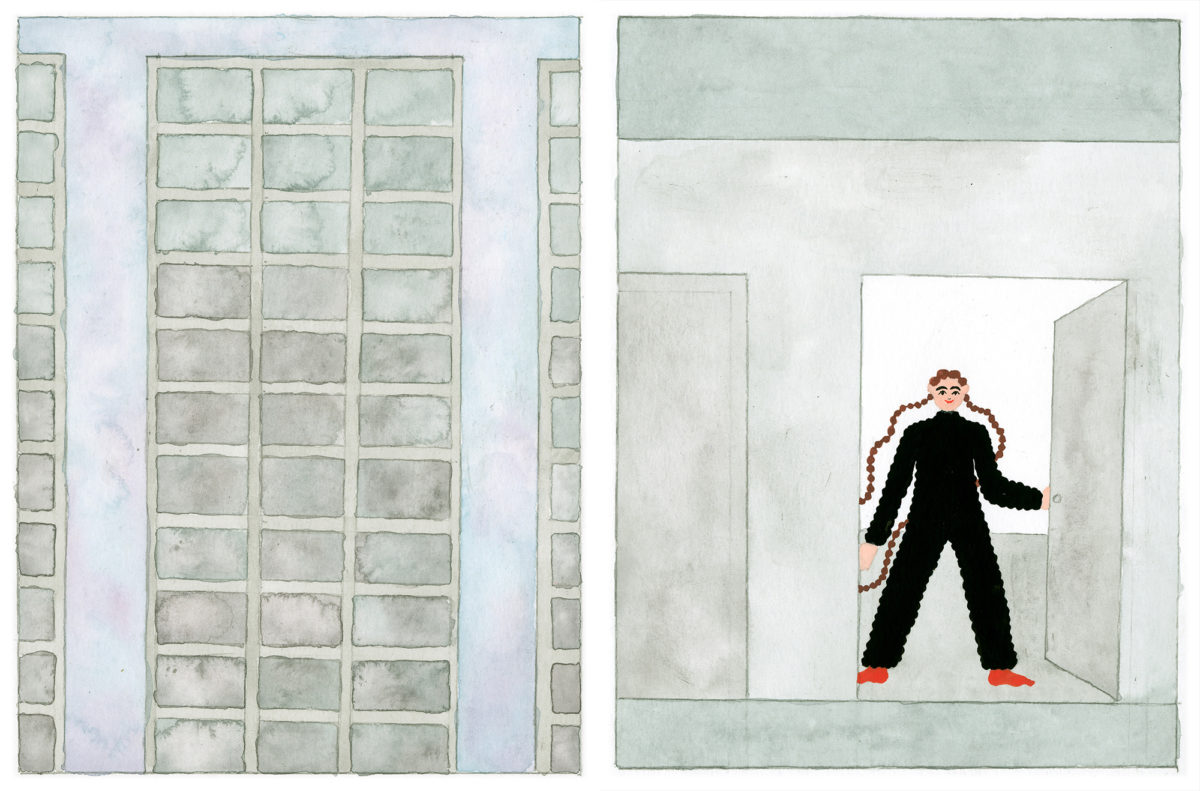 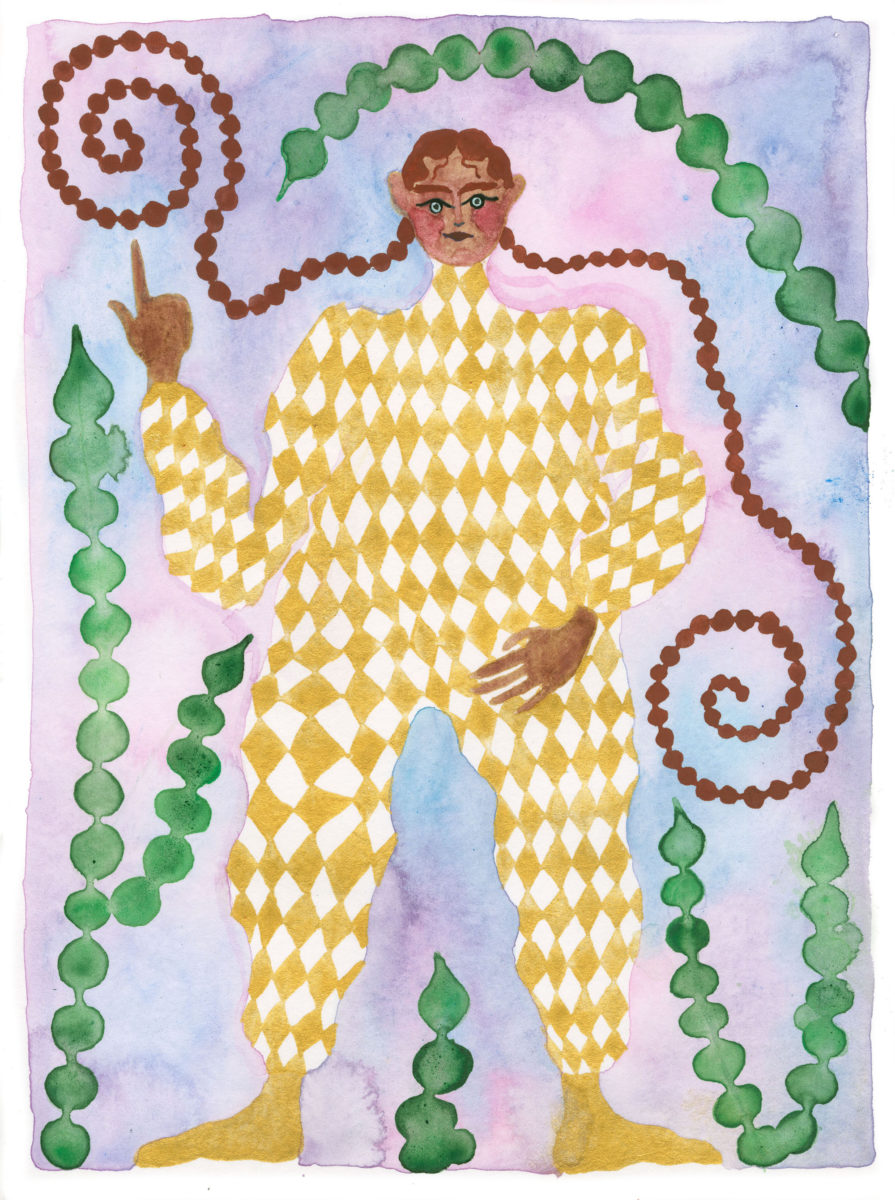 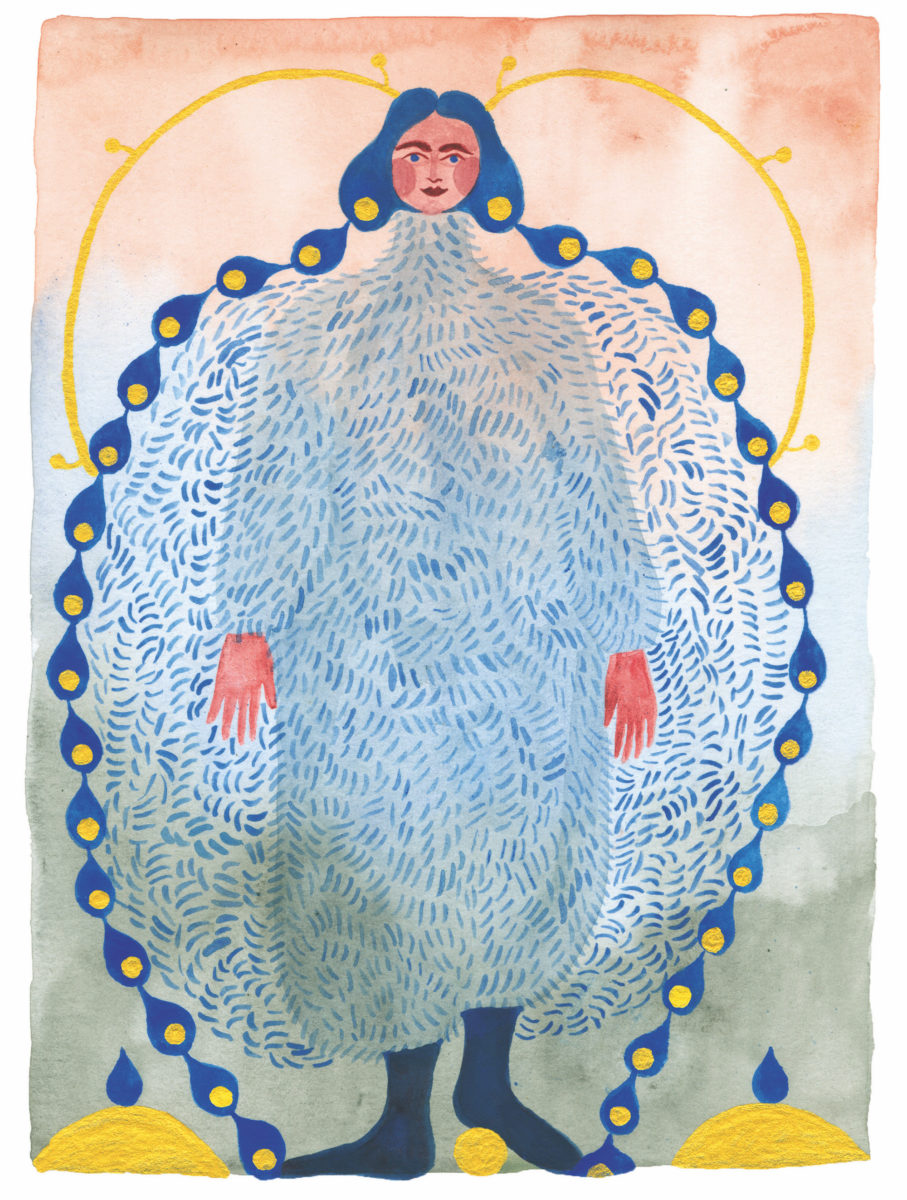