Q: I’ve been working on a collaborative project with a friend and I expected them to work harder. It’s getting frustrating. What are your top tips for working collaboratively with someone you know?

God, this is so awkward. I’m having flashbacks to group projects in school where I would be trying my best (because I have always been a little nerd) and my friends, as much as I loved them, would be useless. Even though it should have just been about the work we were doing for our teacher, the way they behaved made me think about our relationship. I think they knew that I would carry them and it was hard not to resent them for that, because did they never want to carry me, or at least help me while I did the work for them?

I imagine the same feelings are coming up here, so I sympathise. If only it was a clean and easy time. If only things stayed on topic. If only working together felt powerful and creative. If only it wasn’t calling into question your entire friendship… Anyway, let’s see what we can do about it.

As with all relationship problems, it’s probably going to help if you can communicate clearly what it is that is bothering you. And the sooner, the better: you don’t want the resentment to build up more than it already has, because when the project is done, you’re still going to be in each other’s lives.

Did you go into this stating exactly how much work you were both going to contribute? More importantly, did they? If what you thought was going to happen is different in practice, it’s worth checking in with your friend about it. It could be that their capacity, availability, or even their interest has changed since you first committed to working together. If they come back and say that that is the case, and they do want to carry on being involved but only to a lesser degree, at least you can go forward with a new agreement between yourselves.

List the tasks you need to complete and re-delegate them. Talking about your collaboration in these terms, in percentages (was everything supposed to be 50/50 and now it’s not?) or straight-up to-do lists, might support you to discuss these problems without the stickiness of friendship getting in the way.

I would just add that if you agree to take on more of the work, maybe your friend would agree to making sure you are given more credit when the project is over with. Maybe you’re the Producer and they’re the Assistant Producer, or whatever fits best. This might not matter to you at all, and honestly good for you if that’s the case. Just an idea in case it is something that’s important to you.

“If their interest has changed, is there any point in them continuing?”

Circling back to one of the points above, though. If their interest has changed, is there any point in them continuing? I’ve been on projects that I thought were going to be one way and they turned out another: I would have loved a get-out-of-jail-free card. It’s hard to create enthusiasm where none exists, and for all I know, maybe your friend was into the idea at the time, but the working environment or the very act of work itself has killed the vibe. Capitalism can do that to everything, not just creative projects. Easily.

For all I know, you might be hard to work with! That sounds dramatic but maybe your friend is feeling what you’re feeling, just from a different angle. Talking about it will hopefully help clear that up. It could be that you gel perfectly as friends but in this setting you are on different wavelengths. In which case, maybe ending your tricky work-relationship would be in the best interests of your friendship. Which one matters most? Is the work stuff driving you mad because it is the be all and end all, or is it driving you mad because it is making you think less of your friend? Maybe it’s better to just be friends instead.

“You might be hard to work with! That sounds dramatic but maybe your friend is feeling what you’re feeling, just from a different angle”

Plus, if your friend does decide to leave the project with your blessing, then you get to find somebody else who is a better fit (not just, or not only, in terms of motivation but in how you collaborate). One bad instance doesn’t mean you should never, ever work with people you know.

The saying insists that you shouldn’t work with friends or family, but honest and sensitive communication through tricky, layered activities such as art and work, can massively strengthen relationships. If you can navigate a difference of opinion, state what it is you expect from one another, and talk it through when those expectations fall short, that sounds to me like it’s going to make for a solid friendship. And a solid collaboration.

Not to prescribe you eight hours of TV or anything but that’s exactly what I’m going to do. Last year, Lord of the Rings director Peter Jackson, who clearly loves making films that go on forever and ever, released a three-part documentary series about The Beatles. Using archival footage, the series presents the 21 days the band spent in the studio rehearsing their album Let It Be. At the end of those three weeks, they are planning on performing it live. Sounds easy enough but it’s basically eight hours of them fighting and making up, and then fighting and making up. And that’s why, if you are struggling with a collaboration, I think you should watch it.

“It’s basically eight hours of them fighting and making up. If you are struggling with a collaboration, I think you should watch it”

Everyone wants to get on with the job but George Harrison is thinking about leaving the band. They only have so many days in the studio before the scheduled performance but George is AWOL and they need him back. There is a scene early on where John Lennon and Paul McCartney step out for a conversation, not knowing the filmmakers put a mic on the table, and they discuss the power dynamics in the group very candidly.

It’s a good example of how friendships change when people work together, but also how they work through the harder moments in order to make great art.

Have a question for The White Pube? Get in touch with Zarina and Gabrielle at [email protected]

Illustration by Lucia Pham, an artist based in Hanoi

Got an art-world problem? Every month The White Pube set out to help a different Elephant reader… 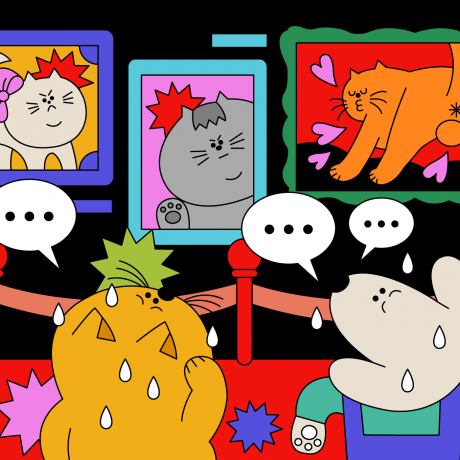